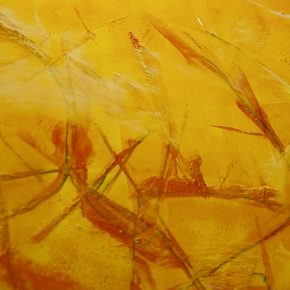 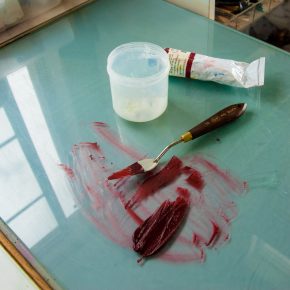 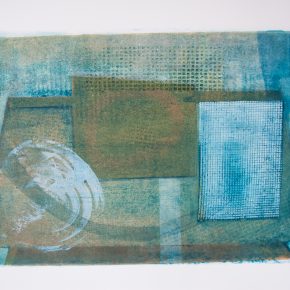 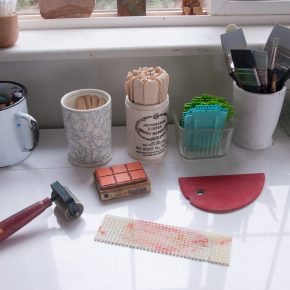 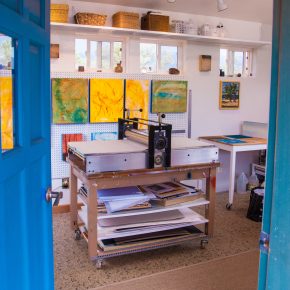 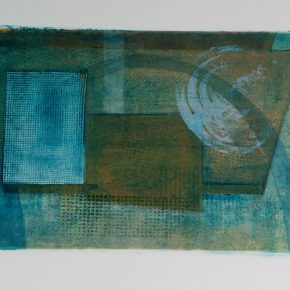 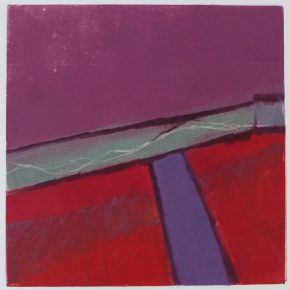 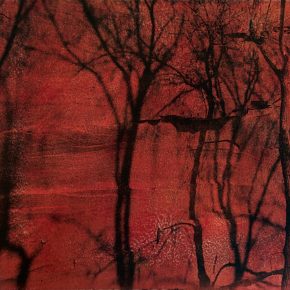 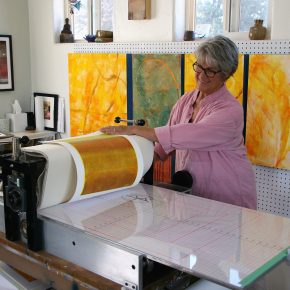 Remember that hackneyed joke where the guy tells his artist friend, “Don’t quit your day job”? Well Nancy Green quit her day job when she settled in Torrey to make art full time.

She and her husband discovered Torrey while on vacation, drawn by the beautiful redrock cliffs. The initial visit inspired Nancy to go to the nearby ranger station, purchase some paper and children’s crayons and spend most of the rest of the trip drawing the redrock formations. The couple returned from California often over the years, finally deciding to build a cabin, which evolved into a permanent house and separate studio. He had wanted to start working for himself, and she agreed to leave her job if she could devote all her time to art—she had been attending workshops ever since visiting Torrey for the first time. “As I gained confidence and improved my skills I felt more drawn to abstraction and oil. I paint mostly abstractly [now] but often there is some reference to or element of reality in the piece.” Green’s focus now is on cold wax work combined with monotype.

Cold wax painting involves mixing the medium —whipped wax and mineral spirits—with tube oil paint, using a stiff gessoed surface onto which many layers are applied. The mixture stiffens, gets tacky, which is a wonderful way to create three-dimensional texture, and allows one to remove parts of layers to expose what is underneath. The mixture is not such that you could brush it onto the surface, but Green uses all sorts of devices to create shapes and designs—it could be a comb pulled through the medium, a scraper, a brayer, raffia straw, a piece of wire mesh, a wedge, a Q-tip. Over time, the mineral spirits evaporate and the oil paints stiffen so one ends up with a hard surface. “You basically end up with a pigmented beeswax.”

In the years before moving to Torrey, Green’s artistic education included an adult education watercolor class, then a University of California extension program in studio arts, where she continued learning drawing, design, watercolor, etc. In Torrey she moved into oils, on to etching and creating monotypes, and finally discovered the cold wax medium. “I kind of cobbled together my education in the arts,” she says.

Her formal education included getting a master’s degree in library science, and another in Spanish and Portuguese. “I’m kind of a perennial student.” She did a residency in Spain with acrylic paints … “Oil was too volatile, and difficult to get.” Here in Utah she took workshops from Doug Braithwaite, Paul Davis, and David Dornan, and when she discovered Wisconsin artist Rebecca Crowell’s cold-wax work in a gallery in Santa Fe, looked her up and attended several of her classes. “I took to [the medium] right away.” She learned that Crowell and a friend are writing a book about the cold-wax medium, which will be published this December. “Cold wax work has been out there for a while but not in much use. Crowell is the one who really has gotten it going. When I took classes from her there were only a dozen or so students, now thousands go to her workshops.”

Green’s approach to creating cold wax pieces is interesting and unusual. In the first layer of the piece she might “sketch” some loose images of dancers, or of tree branches or leaves and in subsequent layers partially cover them, or scrape down to reveal some parts, add more layers, see what happens.

Dancing is important to Green. She had applied for a master’s in dance  but an injury to her spine ended that plan. She is interested in nature—trees, birds, nests. These elements of reality in her work are the essence of inspiration for the finished piece. To this writer, it is like a subconscious process, a reaching deep into herself to connect with what is important to her. Coincidentally (or not), when she took a class in abstract painting from David Dornan, he suggested that she get herself well-grounded in realism before going on to abstraction.

As Green was delving into cold wax work she started thinking about how monotypes might work with that medium, and began to experiment. “I’ll make a monotype, then add a cold wax layer and run the piece through the press again. It is fascinating to see how beautiful the translucence of the paper and the ink on it ‘cooperates’ with the cold wax layers.” She plans to experiment with this process further, but eventually wants to create a series in cold wax medium only. Green’s work has been shown in Kayenta and Tropic, and the Gallery 24 in Torrey carries her work.

Green belongs to a blog site of cold wax artists, oilandwax.ning.com, and has her own blog spot which she describes as basically talking to herself, but readers seem to appreciate.  You can see her work at ngreenstudios.com, and her commentary on cold wax process and some images of her pieces will be in the book coming out in December – Cold Wax Medium: Techniques, Concepts & Conversations by Rebecca Crowell and Jerry McLaughlin. For pieces by other cold wax artists go to coldwaxpainting.com.
This article appeared in the September 2016 edition of 15 Bytes.