The Show Will Go On: Nancy Boskoff 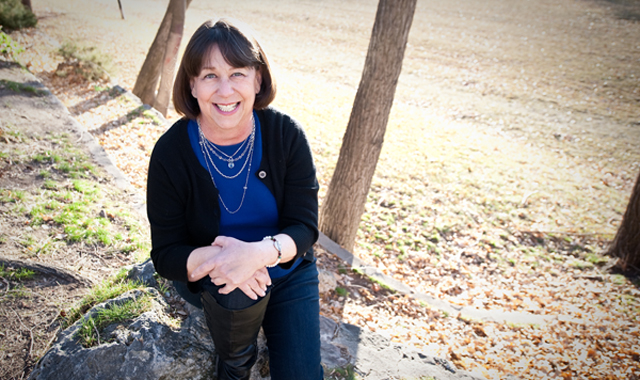 Many people may not know this about Nancy Boskoff, but 30 years ago, before she became an arts administrative fixture in Salt Lake, she was a modern dancer. She recounts a story of when she choreographed a piece in her previous life, before she moved to Utah.

“I was in the box with the tech crew for one of the rehearsals and one of the guys looked at me and asked, ‘What is this about?’ I told him it wasn’t about anything to which he replied, ‘It has to be about something.’ It turns out he and the rest of the guys on the crew made up a romantic story about the dance. It may not be what I had in mind, but I thought, ‘OK, that’s fine.’ If someone can experience art and take something from it that is meaningful to them, that’s what is important.”

If you happen to be an arts administrator, you understand much of your career deals with what is essentially this conversation over and over again. It helps if you possess the openness and positivity Nancy Boskoff does. The creative challenge is finding new ways to show the public how art experiences enhance your life and bring meaning to it, no matter who you are and what you take away from it. For over three decades, Boskoff has spent her career taking on that challenge as she ran what looks like an arts organization but operates as a government agency. Before she came to Utah, she worked at a neighborhood art center in D.C. (where she grew up), she was the director of a county art council in Maryland and then moved to Utah to work at the Utah Arts Council in community development. Shortly after, she took on the task as director of the Salt Lake City Arts Council. I sat down with her for over an hour to get an idea of what her career here has meant to her and what story it told. But as evidenced in her approach as a choreographer, Boskoff doesn’t think in terms of stories. She’s more an impressionist when it comes to retrospect.

One of her impressions is that Utah still seems to have an inferiority complex regarding how rich the arts are in our community. “When I moved here in 1980, the art scene was already vibrant. To have a Shakespeare festival, a ballet company, two modern dance companies, several theatre companies, a museum of fine arts, the salt lake art center, the opera and the symphony — all professional level — not community based, that’s impressive. What I see from people who come visit is they’re amazed at the quality of activity. We don’t realize how much we have and how good it is.”

Another impression is how over the years, the arts have become more integrated into the whole of the community. Much like the tech guy backstage at rehearsal, there will always be someone who needs a story or something logical to explain art’s purpose. But people are beginning to grasp a little more of the abstract. Especially for the younger generation, going to an art event isn’t necessarily an event anymore. It’s just part of what they do.

If you know Nancy Boskoff, you’d think her life is Salt Lake’s art community. She has a reputation of being the omnipresent arts activist. Unlike some self-proclaimed arts supporters, Boskoff actually attends as many performances and events as she can. She has learned so much about the many art forms Utah represents and she has had a lot of on-the-job training when it has come to running a visual arts gallery and the city’s public art program. “Personally I think public art is a fascinating arena of art. It’s not just about visual art, it’s about community, it’s about stakeholders, it’s about construction, engineering, legal issues…so for me it is a fascinating field and I feel really fortunate that I was able to learn about it.

Deciding to leave her career at the Salt Lake City Arts Council has been difficult. Someone recently asked her: “Are you bailing?” Boskoff has been around long enough to see challenging times as well as prosperous times. She just smiles when she hears people talk about how things are in a downward spiral and will never be the same. She knows things will look up soon. So no, she’s not bailing. “The arts council is in really good shape. I care very much about the people here, so leaving them is hard. There’s always more you want to do. But I have enough years to be able to retire and enough energy to do something different. What I really want to see is really good people to succeed all of us who are leaving their positions, and I feel pretty good when I see a new generation of people who have a foundation in arts administration and understand what it takes.” She’s not sure what the future holds for her, but that’s what is exciting. She is also optimistic about the future of Salt Lake’s arts programs, its artists and their stewards.

“Something that I have learned over time is everyone is replaceable to a degree. The show will go on.”