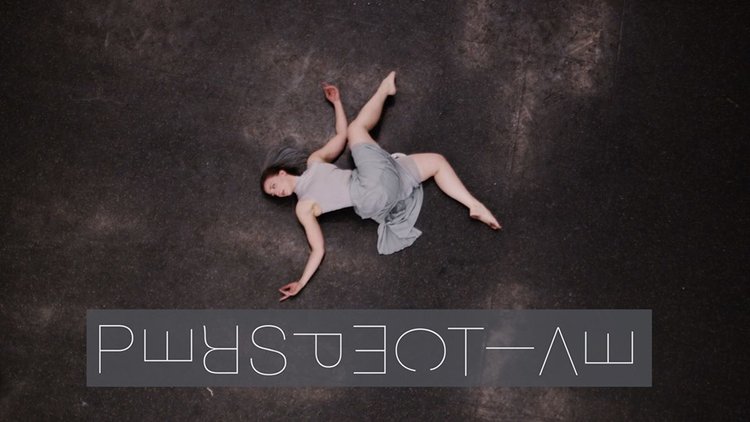 Myriad Dance Company recently presented its winter offering, Perspective, at the Utah Museum of Contemporary Art (UMOCA). The company’s first publicized performance under the artistic leadership of Kendall Fischer, Perspective lived up to its name by subverting expectations for the venue and format in which dances are presented.

If you’re not familiar with UMOCA, the downtown museum’s largest gallery space is one level below ground and surrounded by a glassed-in mezzanine. Fischer placed audience members behind the glass in two rows, one sitting and one standing. At last, a bird’s-eye view, erasing all sightline issues! (Those who choreograph floor-work in small spaces with shallow risers, take heed.)

Myriad members, alongside a handful of guest dancers, entered the gallery floor from all sides, gazing up and around as they wove in and among each other. As they wandered in silence, I wondered if they were truly looking up at us, or if their gazes were oriented more internally. That gray area between connection with and separation from the performers below was a thread throughout; intensified by the layer of glass that wouldn’t normally come between a viewer and a dance.

Fischer choreographed two of the program’s five total movements, with others by Ashley Creek, Sierra Stauffer, and Fiona Nelson, all frequent Myriad performers themselves. Each movement featured an occasional signature marking a choreographer’s unique touch. As a whole, though, each dance was more similar to its companions than not, begging the question, on the one hand, of why the program should require the billing of five separate dances, but on the other, making the case for a very cohesive program despite contributions from multiple voices.

Transitions between each dance, so smooth as to become invisible at times, swept varying configurations of the evening’s performers in and out of the center of the gallery floor. Long, diaphanous, burnt-orange-colored skirts accentuated the eddies and swirls of the dancers, taking on lives of their own, while sometimes appearing to get in the way of supported partner work (the skirts were later abandoned for a more practical choice of leggings, allowing greater visible freedom).

I did wish that choreographers had paid closer attention to the orientation of audience to dance — upright choreography did not always make the case for why the dance should be taking place below us; my eye was most satiated when a choreographer utilized all the dancers lying on the floor, marking out kaleidoscopic patterns layered on top of the wooden floor’s repetitive squares, taking advantage of the audience’s privileged, aerial view.

In these instances, the more was truly the merrier: with the complete cast of dancers, I was able to see the full flesh of the design in space and watch it expand on a larger scale across the cavernous room. Such was notably the case in a diagonal line from which dancers would peel out and sweep back in, finding a new position while traveling backward in a grand flocking.

All of the program’s music was electronic and trance-y; with only a faintly discernible meter, one track could blend unnoticed into the next. Working in tandem throughout, as choreographic mimicked musical quality, both became a vessel for an overall effect that washed over the space — one overarching feeling, like a long thought train or an extended music video (thinking Andrew Winghart here, and his powerful swarms of contemporary yet Graham-inspired women). Changing it up toward the end, I believe in Nelson’s piece, a noticeable meter emerged, congealing some previously scattered choreographic unisons to stronger effect.

The evening provided a truly unique viewing experience and it was exciting to see Myriad shake things up from past performances in more intimate venues. There was great potential in the possibilities unlocked by Fischer’s choice of space, though with perhaps still a bit of room left for exploration. I would eagerly press my nose up against UMOCA’s mezzanine glass for Perspective, round two.