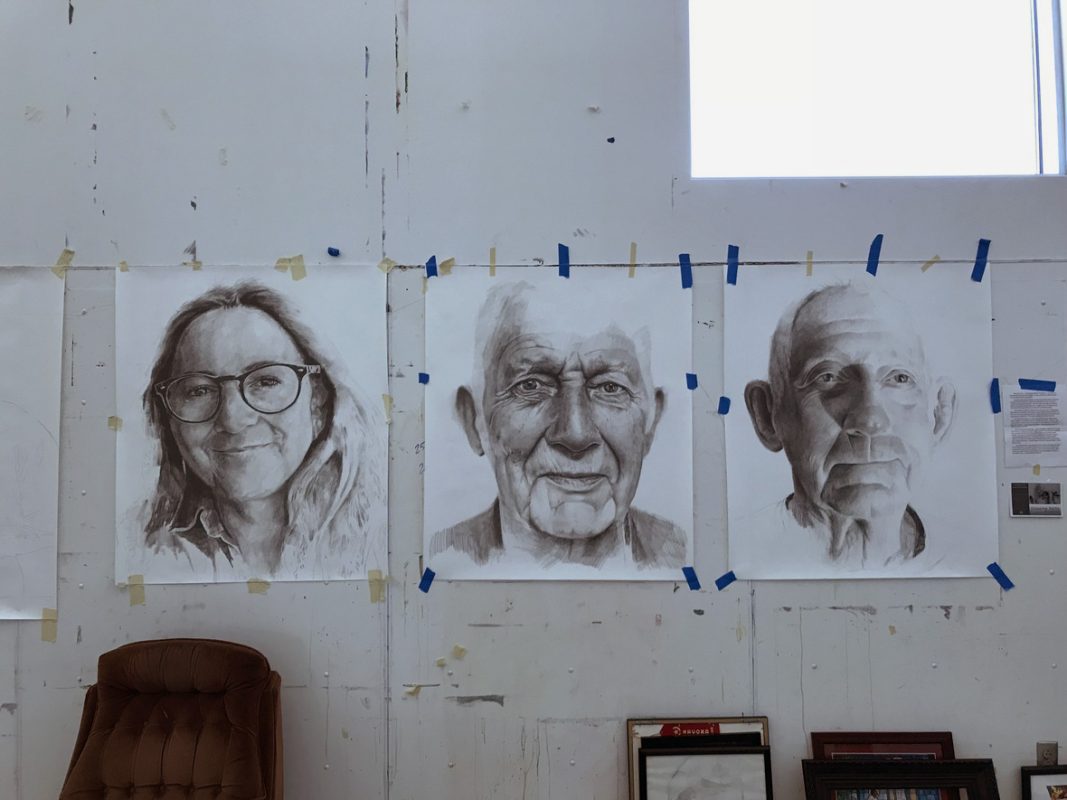 We cross paths with dozens or more people in our communities every day but how often do we take the time to sit down with them and share stories? For Holladay artist Jim McGee the chance to get to know his neighbors came when he applied for and received a grant from the Holladay Arts Council. He proposed a series of portraits and stories of willing subjects in Holladay. The exhibit, Crossing Paths, opened in Holladay City Hall on July 10 and runs through Aug. 6.

Though McGee was elated to learn his proposal was accepted, he also experienced a stab of fear about starting the project. “I’m this introverted artist dad who spends most of the time at home,” he says. “How would I find the subjects to paint?” he wondered.

When the Holladay Journal ran an article about the project, McGee discovered if you let a newspaper publish your phone number, you will get calls. He invited people who were interested to meet with him at the 3 Cups coffee shop in the center of town. About seven or eight showed up, he recalls. They drank coffee and shared stories, and McGee had his first subjects. Other people were referred to him, or he approached people he had seen around town with an invitation. 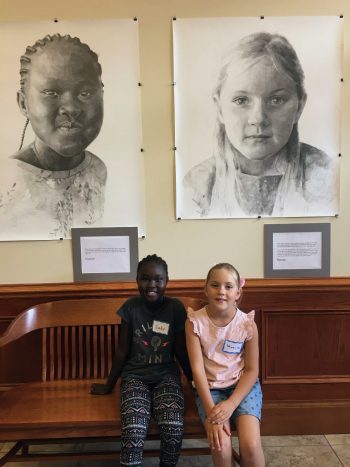 Nyakun and Mariah in front of their portraits.

Then it occurred to him that he needed some kids as well as adults. A fellow artist suggested her 7-year-old daughter and a friend. McGee went to her house, jumped on the trampoline with the girls, listened to their stories, and took pictures.

Though McGee did some life sketches of some of his subjects, he found it was easier to work from photographs he took after spending some time with each subject to listen and get acquainted. “I’m not a good photographer,” he admits. “But I soon learned what kind of lighting and points of view were best.”

Among his subjects are Ketan Shah, who runs the Chevron gas station in Holladay; Rebecca, an immigrant from Chile and 20-year Holladay resident; Wade, a Holladay firefighter and paramedic; Minny, a published poet; Paul Draper, a professional magician and Holladay resident who recalls going to elementary school in what is now City Hall; Jerry, a 48-year resident of Holladay who, at 84, skis, hikes, travels, and plays the organ and piano; and, finally, the two girls, Mariah and Nyakun, whose friendship includes laughing, dancing, swimming, and playing on the trampoline. 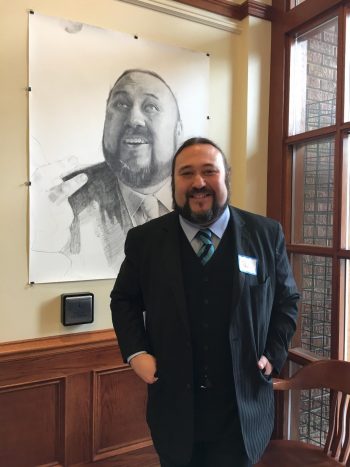 Professional magician Paul Draper, in front of his portrait.

Along with the 42” x 36” drawings, the exhibition includes brief stories of each subject, reminiscent of the stories from the Internet phenomenon “Humans of New York,” which was part of McGee’s inspiration for the project. As one visitor to the opening reception noted, “I never knew there was so much diversity in Holladay.” Indeed, through the stories we meet people who are gay, immigrants, old, and young – all with at least one thing in common: a love for the Holladay community where they live or work.

McGee’s drawings are finely drawn, larger-than-life images that capture not only the likeness but the personality of his subjects. “I felt like an interpreter, being faithful to their stories and character,” says McGee. “It wasn’t about me, it was about them.”

Indeed, at the opening event on July 10, McGee shared the spotlight with the subjects of his paintings. Paul did magic tricks. Jerry played the piano. Minny read a poem she had written. The event drew some 250 residents, family, and friends. The atmosphere was more like a gathering of family than your typical stuffy art opening.

An art teacher at Juan Diego Catholic High School, McGee uses a large white wall of his classroom as his easel and shares his creative process with students. They were able to follow the Crossing Paths project from beginning to end, as well as see the other projects McGee pursues. McGee likes to think he inspires his students to pursue art. “I feed off them,” he says, “and they feed off me.”

In 2011, McGee was challenged to paint a 40’ x 40’ altar piece for the St. Francis of Assisi Church in Orem. Since then, he has also painted a series of Old Testament and New Testament murals at the church. 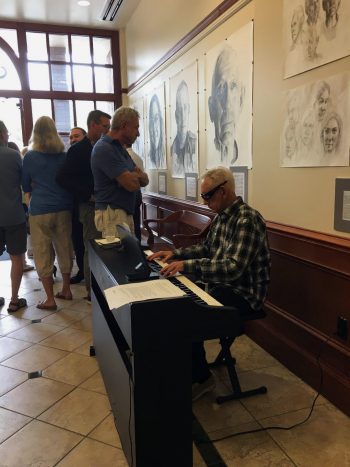 This year McGee’s painting, “The Lookout,” was accepted in the Springville Art Museum’s Annual Spring Salon. He was also part of Art Access’s 300 Plates Fundraiser and will participate in another Art Access exhibit in September. Prior to moving to Utah in 2002 to attend graduate school at the University of Utah, McGee worked as an illustrator and gallery artist in Philadelphia, where he earned his BFA degree in illustration from University of the Arts.

The response to Crossing Paths has been so positive that McGee has received a second grant to continue the project next year. This time, he says, he will paint rather than draw. Holladay Arts Council director Sheryl Gillilan says, “He’s forging a stronger bond amongst neighbors by bringing them together to share their stories with others through art. This is exactly what we need in our divisive country right now.”