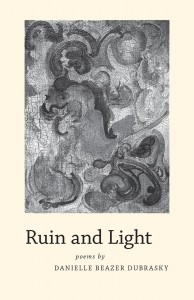 Danielle Beazer Dubrasky’s new chapbook collection, Ruin and Light (The Anabiosis Press), begins in sleep and dreaming, and the shape-shifting lines of its lovely first poem, previously published in 15 Bytes’ Sunday Blog Read, contain in microcosm the themes, motifs, and movements of everything that follows—and prompt questions that will follow the reader through the pages to come:

The ceiling fan spins your sleep through the smallest sound—

moths tapping their bodies against the screen,

into the eyes of children who have never heard rain,

the last thing your mother says to you

before you know it is the last thing.

The fluidity, the cadences, the beauty of the language are lulling; they carry you through as though in a basket, so that at first you don’t ask questions, and it takes a while to start wondering where you are and in what state. Without breaking a stanza, the poem turns—or does it?—toward waking:

the sky becomes both land and sea for traveling animals.

unfold on the arms and faces of those sitting nearby—

a scar on the left cheek, a red mole, a swan tattooed on a wrist—

and when you ride to stations beneath the earth

your voice spins through the tracks and maps the darkness.

Has there been an awakening? Is the speaker now describing habitual activities in waking life, a composite or particular train trip? Or are we still sleeping, moving through dreams—one of those dream-cycles that carries through the night, so that you wake with a feeling that you’ve traveled?

If you need answers to these questions, you’ll have to make your own; this collection is not so much lyric narrative as narrative lyric, its minnow-like twistings beautiful to watch but not always given to apprehension. It is a story told sub-rosa, for all that you’re reading it on the page.

Part of the mystery is the identity, or perhaps it would be more accurate to say the position, of the speaker. These poems are written in the second person, and through my first few readings of them I assumed that the speaker was the “you” addressed in the poems. But as I kept rereading, I felt less sure. I began to wonder if the woman was the speaker, assuming an external point of view to observe herself and the addressee, or if, less likely I thought but also possible, the speaker was a third party altogether.

A caveat: my confusion could be caused by too much knowledge—Dubrasky and I are friends. Though we see each other only once or twice a year, usually just for coffee or a meal, and rarely communicate otherwise, I do know some of her personal history—enough to speculate. This isn’t the most useful way to read poetry, particularly for the purposes of a review; I don’t wish to reduce these poems to a roman a clef myself, and I certainly don’t wish to encourage others to read them in such a way.

It seems to me, though, that it’s not just my semi-insider’s knowledge that makes me think there is some real ambiguity about point of view, about who is speaking and who is being addressed, in these poems. At one point it is made explicit:

She hears the quiet sorrow in your cupped hands

filled with water from the river—

It is not strange there, a mirrored world.

and you wonder who is behind those eyes, that mouth—

if you could just see through the water looking back,

you would see her remembering the taste of snow.

More generally, though, the ambiguity inheres simply in the question of who is speaking the poems. This could, I suppose, be seen as a weakness, but it could also create the conditions for the kind of projection that often makes a poem resonate for a reader who comes to it without preconception.

The world of the poems is not exactly, or is not always, our world, though it shares our world’s natural environment and partakes of its natural history, art, and lore—the anatomy and features of the scallop, its importance in religious tradition and iconography through the figure of St. James, and its association with Venus through Botticelli are all woven into a twelve-line poem, my favorite in the collection. There are moths and dragonflies, minnows and trout. There are antlers, a raccoon’s tail; a river and willows.

It seems a surreal world, moving beneath or within our own. A world of myth, or, in some moments, of dream. But it intersects our world—the addressee collects fishing flies, and matchbox cars, and old maps. Deer come out of the snowy woods into a backyard. The movement between worlds can happen more than once in the same poem:

You give her what you value most—

a mayfly nymph broken off someone else’s line.

She puts it with an antler bit, and they are two fragments

rattling together, one snapped off, one shed.

Somewhere the fisherman has unsnagged his pole

and the buck has grown back its rack.

When he startles the stag in a clearing

he is stunned by its frame.

When it lurches into the woods

he looks for a bit of pelt, weaves it into lures.

The children keep appearing—those from the first poem, “the children who have never heard rain.” This is how they are always referred to. They appear at intervals and seem denizens of yet another world, their behavior calling to mind the faeries of Celtic folktales—“[t]hey call to you with their laughter / but when you approach, only leaves and dragonflies.” They observe atmospheric phenomena through sea glass and “return pieces [of things] to the places from which they were lost.” Who they are and the nature of their relationship to the main parties in the poems are mysteries and their presence is somewhat distracting, but they seem to play some integral role—ultimately, they are gathered and diffused into the natural phenomena of the poem-world in a passage that brings to mind Yeats’ images of druidic transmigration, ending in their ascension with swans “charting an azimuth toward spring.”

Azimuth. Virga. You will expand your vocabulary if you look up words while reading these poems. These two call attention to themselves, and the first appears several times—it is important to the speaker. An azimuth, according to the top definition on Google, is “the direction of a celestial object from the observer, expressed as the angular distance from the north or south point of the horizon to the point at which a vertical circle passing through the object intersects the horizon.” Got that? Don’t worry, it can also be simply “the horizontal angle or direction of a compass bearing.” Dubrasky uses it in both senses, at different times. The speaker, whoever she is, is preoccupied with her position in relation to heavenly bodies and constellations, to the horizon and to points on the map. She is trying to site herself in the world, and also to navigate it; there are points from which and to which she is traveling, and this arcane language helps her to get there. Azimuth, virga, catadromous. The words are used for accuracy, but they also seem to function as codes, little cryptograms telling a story within the story.

Only one of you is telling this story.

No one will ever know

who is body and who is shadow.

The two figures shadow each other, meeting and parting, being found and then lost, echoing Orpheus and Eurydice here, Narcissus and Echo there. The language continues to lull. And then, like a dream, it’s over, ending so suddenly you turn the page without realizing what’s happened. The last things you see are moth wings and starlight. 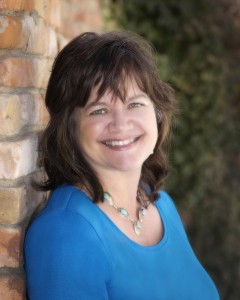 Danielle Beazer Dubrasky is an associate professor of Creative Writing at Southern Utah University. Ruin and Light won the 2014 Anabiosis Press Chapbook Competition. Her poetry has also been published in Contrary Magazine, Sugar House Review, ECOllective, Tar River Poetry, Weber Studies, CityArts, and Petroglyph. She has been a finalist for White Pines Press, a semi-finalist for Backwaters Press and Elixir Press, and a fellow at the Virginia Center for Creative Arts. She is also a two-time recipient of the Utah Arts Council first place award in poetry. She is the poetry editor for Contemporary Rural Social Work journal and has developed a curriculum of poetry writing exercises to be used in poetry therapy groups. She grew up in Charlottesville, Virginia, but has spent the last 20 years in southern Utah.