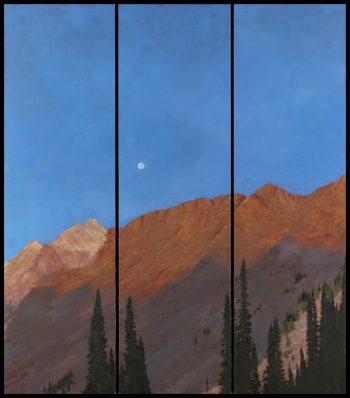 Many landscape paintings achieve greatness not for what they depict but for what they do not. Artists like Thomas Cole, Frederic Edwin Church, Caspar David Friedrich and JMW Turner secured their places in art history for their ability to capture the sublime element in nature; that which lies beyond the physical. While creating landscapes beautiful in their physicality, they placed emphasis upon those ethereal aspects of nature that incite thoughts of wonder and awe, that evoke what lies beyond what can be seen to what can be comprehended only by the mind’s eye.

While rivers, streams and mountains offer a comprehensive view of beauty in the natural world, the beauty which may be gleaned by the imagination is often more powerful. Like a gothic cathedral, a painting can be a vehicle that, through its compositional structure and painterly execution, invites the beholder to a higher notion, a more spiritual attainment and contemplation.

In his new cycle of works, Brigham Young University artist Conrad Nebeker beautifully renders his landscapes — Utah landmarks familiar to many — and traverses what might be mere geography for a greater contemplation of the sublime presence of nature in its totality. Nebeker’s ancestors were early pioneer settlers and he feels particularly connected with the land – a motivating factor to his choice of subjects, which sets him apart from his fellow students working in more contemporary modes. Yet Nebeker’s paintings are no less original or relevant. As much as any abstract painting, Nebeker’s paintings open doors to interpretation. He does have “happy little trees,” but his strength lies in the transcendental aspect of his works, painting landmarks while provoking the imagination. Nebeker looks beyond the horizon and literally reaches for the sky. 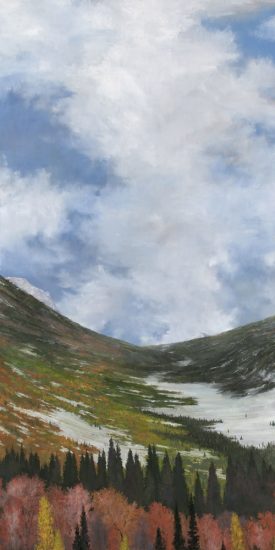 Most of Nebeker’s works are tall verticals, large in scale, with less focus on the land, which often occupies the bottom third of the painting, than the sky, which dominates the composition. Nebeker does this, he says, to invoke a sense of presence and absence. In his “Clearing Storm,” there is as much to be gleaned by the intensity of the sky above as the land below. It is a tumultuous sky, ubiquitous in strength and it is as fundamental an element of the natural landscape as the gorge below. It reveals the power of the natural world and is the driving force which, over millennia, has given the land its very form.

Nebeker’s painterly allusions to the substance of the sky and the physical relationship with the land below invoke much of the subject of his work. One of the artist’s most provocative pieces, “Spring Storm,” a prairie near Utah’s Bear Lake, is the forecast before the storm and exemplifies the command of the driving force of the empyrean.|2| The field is backlit by the sun, while in the distance an ominous presence approaches. This is one of Nebeker’s most minimal works, yet perhaps his most dramatic. In the landscape of Utah, the location for all of Nebeker’s paintings, the sky is omnipresent; affecting and creating the natural environment. In Nebeker’s landscapes revealing grand monuments, the sky is utilized as an integral aspect to the natural wonders on display. The dramatic encroachment of the storm upon the sunny prairie in “Spring Storm” signifies that the luminous field will soon be clouded in darkness and storm.

To achieve success in these landscapes, Nebeker needed to master the technique of light and the impact it has on the physical. Like the Impressionists had learned in the nineteenth century, light is fundamental in the perception of color, which they found changes moment by moment in relation to the quality of surrounding light. In his triptych “Mount Superior,” Nebeker paints a glorious dawn on the slopes of the mountain, but the viewer does not see the sun rising over the east but the light playing off the mountain in the west. In the horizon above, an early morning moon may be seen setting as the sun rises behind it. Nebeker lends an uncanny play of the two orbs of light and the effect on mountain and sky. This is truly a Utah morning. 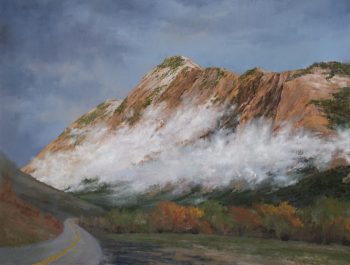 Nebeker’s works use few artificial references. One exception is an empty road at the base of Little Cottonwood Canyon in his “Evening Light.” The road seems to encroach upon the natural like a serpentine interlocutor, a contrast from his other works that are all entirely natural. The road adds an aspect that is sharply contrasted to all other elements in his paintings and may be seen as obtrusive, however deserted the road may be. The lack of the artificial in his work adds a sublime element, entirely transcendental to the physical, which in the case of “Evening Light” is obstructed. The artificial element in this piece begs the question of the natural and the destruction of it by the man-made.

Nebeker at 25 is a young artist, yet his approach to landscape painting is seasoned. It is inventive, original and insightful, and captures elements that qualify great landscape from the kitsch. His use of balancing the land with that which is above adds an element of ethereality which many landscape artists at a much greater age cannot capture. His focus on the sky adds the quality of the sublime to transcend physicality that can only be achieved by seeking the natural in a state of searching beyond the earthbound. Instead of using exacting detail toward a reduction to the minimal, Nebeker’s landscapes leave the mind to wander through his paintings; beyond his paintings. They incite the imagination, open the mind and reach heights greater than the highest mountain peaks painted by more exacting artists. Nebeker’s landscapes, like many of the best, achieve a state of the natural untouched by human hands, a state of wonder and evocation of the universal. 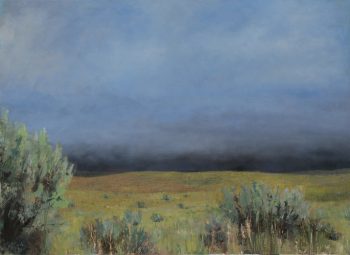 Moods of the Land opens March 17th with a closing reception March 28th 7:30 p.m.-9:30 p.m. at the B. F. Larson Gallery in the Harris Fine Arts Center at Brigham Young University