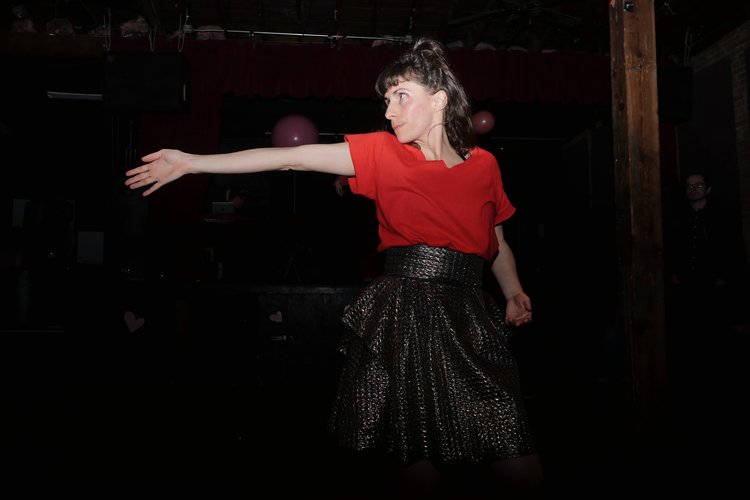 At the end of HEARTLAND (+ Dance Party), Molly Heller addressed the crowd, thanking us for exploring the many experiences of the heart together. “We entered into this time with the understanding that the heart is already whole,” she said. In this brief moment, Heller acknowledged the completeness of each person inside of our complex and, at times, confusing hearts. Her current work, HEARTLAND, does just this: it affirms and teases out the complexities of the heart, offering no definitive answers but creating space for performers and audience members to increase the dynamic range inside their hearts. The part-performance, part-pop-up-dance-party organized by Heller was just one iteration of her ongoing body of research on the idioms, sensations, and experiences of the heart.

HEARTLAND (+ Dance Party) blurred the lines of performer and audience member, inviting the audience to participate in Heller’s research through a dance party at The Beehive in downtown Salt Lake City. The venue’s dark interior was covered in at least 100 pink balloons that varied in hue and size; the overlapping forms made me wonder if we had stepped inside a heart. I showed up barely on time, covered in snow, ready to dance it out on the dance floor, and curious as to how the performance would integrate with a dance party. Heller had described the evening as a complete experiment, and a “dance within a dance.”

Before the dance party started, Heller opened with the most formal portion of the evening. Formal is not quite the right word here, though, as the whole evening defied the conventions of a formal modern dance performance. Dancers Brian Gerke and Marissa Mooney joined Heller on “stage”; the two have been working with Heller on her HEARTLAND practice since fall 2018. Composer Mike Wall accompanied throughout the evening, making music live and acting as DJ. With the audience watching from all four sides of the room, the three dancers took their space between four pillars in the center, with minimal distinction between dancer and audience. They did, however, wear shiny red-and-gold clothes that stood out in the low light. The three worked through their practice, moving in-and-out of trios, solos, and duets. They constructed a boxing ring of sorts with party streamers, just one of many pink party favors floating around The Beehive: think pink construction-paper hearts, pink sunglasses, heart candies, etc.

Heller has a distinct physical quality that manifests in HEARTLAND. She alternates between working with highly dense space around her, as if processing something unseen to the audience, and with a light, bright, carefree freedom. Gerke moved with his classic ease, but with a sense of effort and struggle inside of the articulation. It looked as if he was trying to move his shoulder blades and ribcage up around his heart. Mooney brought a bouncy, casual quality to the trio. All three moved with birdlike quirks and quick, leggy weight shifts. As they wrapped up their opening trio, Heller stood with her heart open to the sky for a long time. A low, pulsating bounce filled the room, and we all began to pulse with it. It was undeniable, the bass and tactile energy demanding that all who were present be affected by the music, by the dance. Thus began the blurring of lines and the most freeing dance party of my life.

Throughout the next 90 minutes, everyone in the room bounced, flung, snaked, and dug deep within; it was a safe space. One attendee remarked that she hadn’t felt this free to dance in public in a long time. The performers danced the entire evening, mingling with all the other bodies. They occasionally danced on the benches around the room or climbed onto the stage where Wall was curating the music. Those who took dance breaks or chose not to dance bobbed their heads, grooving in their own way on the sides. Almost everyone had a larger-than-life grin that only disappeared due to extreme focus on the dance.

For those who stayed until the very end, Heller performed a tender yet defiant solo after the dance floor had cleared. She moved as if her arms and legs were attached to her sternum, as if they were extensions of her heart. She skipped and floated, claimed her power and fought for balance. In a final farewell, all three dancers performed a delicate score seated on the edge of the stage in front of Wall as he sang “Fade into You” by Mazzy Star.

Heller has promised more pop-up dance parties, and more iterations of HEARTLAND. She has another one coming up already at 12 Minutes Max on Sunday February 17 (2 p.m., in the main auditorium of the downtown Salt Lake City Library). HEARTLAND also will continue to develop beyond this: there is a film in the works, and the practice continues to reveal itself. 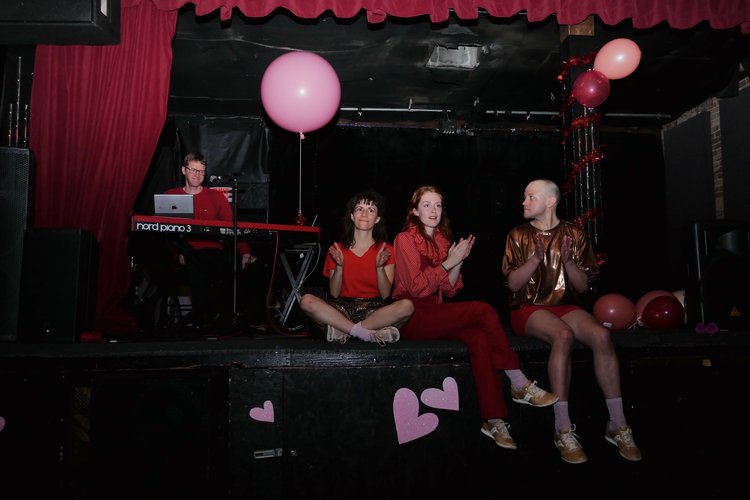 This article is published in collaboration with lovedancemore.org.