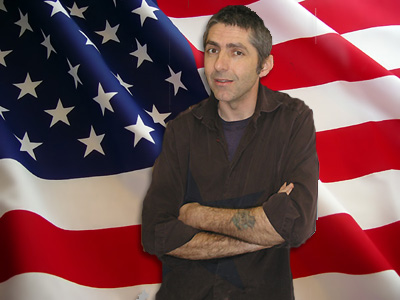 Brian Parkin and his true colors

Elizabeth Matthews invited me over for lunch today. Her other guests were Brian Parkin and his wife, Marian Boardley, owners of Moab Art Works, and their friend, Trish Hawkins, who lives in Castle Valley. Brian and Trish, both natives of the U.K., had come to Salt Lake to take their oath of allegiance and become U.S. citizens (Marian had already become a citizen). All three have lived in the U.S. for a long time and became citizens because of their strong desire to vote, especially in local elections. Trish is married to a local politician and Brian and Marian are enthusiastically involved in making Moab a destination for the arts. They realize that Moab and the surrounding area will always be known for its redrock and outdoor activities, but they would like to augment the area’s attractions with venues for fine art.

Elizabeth wrote on Moab Art Works for our April edition, but I neglected to include a photograph of Brian or Marian with the article. I don’t have an image of Marian, but found this one of Brian from a previous edition and doctored it up to look appropriately patriotic. Marian is forming an exhibition of pinhole photography if there is anyone interested (contact the gallery at the link above). Brian, meanwhile, is busy trying to purge himself of un-yankee idioms. We suggested he be fined a quarter for each slip-up (and the total be donated to Artists of Utah). So stop in their gallery – on Moab’s Main Street — and help us monitor how he’s doing. If he offers to “knock you up” next time he’s in your town, don’t take offense. But do take a quarter.