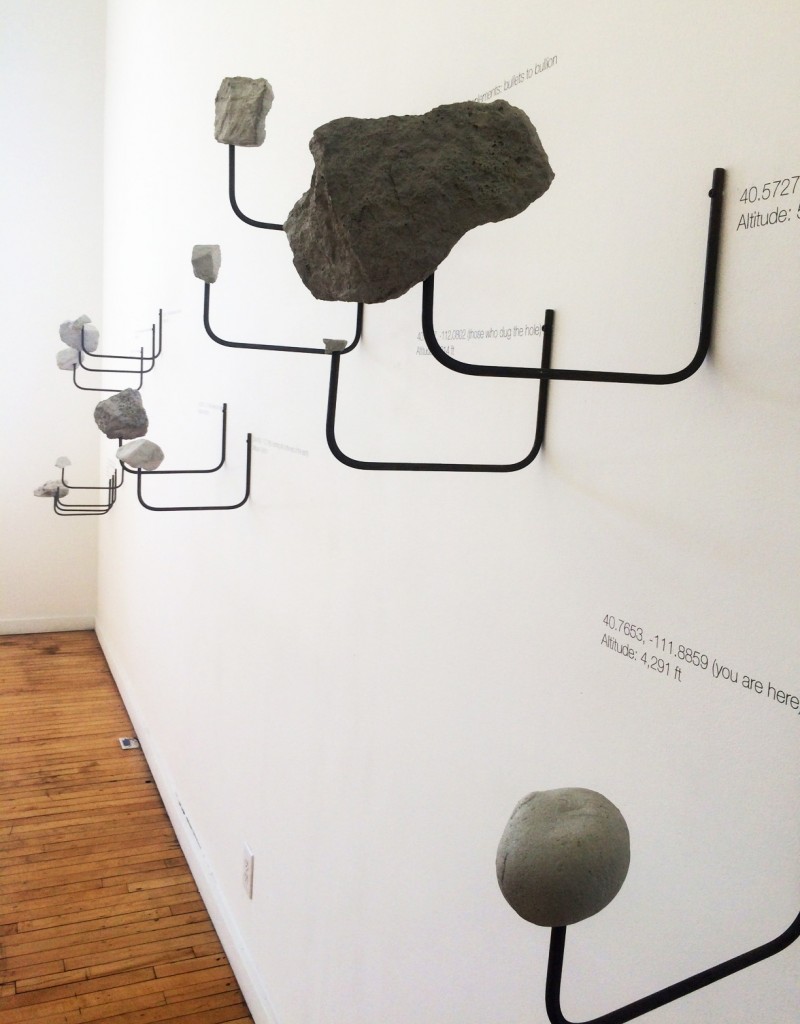 Michael Ryan Handley and Cara Depain, native son and daughter of Utah, returned to the state this month for solo exhibitions at CUAC, in Salt Lake City. Handley has been living in Philadelphia and New York City after finishing an MFA at Yale, and Despain has been working as an artist, writer and curator in Miami. Sometimes distance is necessary to bring home into focus, and both artists have returned with exhibitions that explore the social, political and environmental narratives of the western landscape.

Despain’s exhibit, seeing the stone, lines CUAC’s front space with 23 concrete castings of rocks perched on rods that project from the walls at various heights. Each is titled by the prosaic numbers of a GPS coordinate and an indication of elevation, along with more poetic subtitles (in parentheses) — “bullets to bullions,” “the faith to move mountains,” “Hide to Kolob” — while on a separate wall the locations of the original rocks are indicated by dots on a large-scale map of Utah. This visual display is wrapped in the context of a “field guide,” a document that is available for purchase or as a free PDF online, and which should be seen as an integral rather than supplementary part of the exhibit. In fact, the “field guide” might be seen as the meat of the exhibit, the rocks merely its dressing.

At the beginning of the document, the artist poses a problem: “What can be put indoors in a room of human scale that can say more [about the landscape] than being there.” For many the answer may be nothing, which would go a long way to answering the complaint that Utah lacks a sufficient patron base for the arts: In a state that enjoys an average of 222 sunny days a year and hosts one of the more diverse geographies in the country, it may be no wonder people choose to spend their time out-of-doors rather than in a gallery. 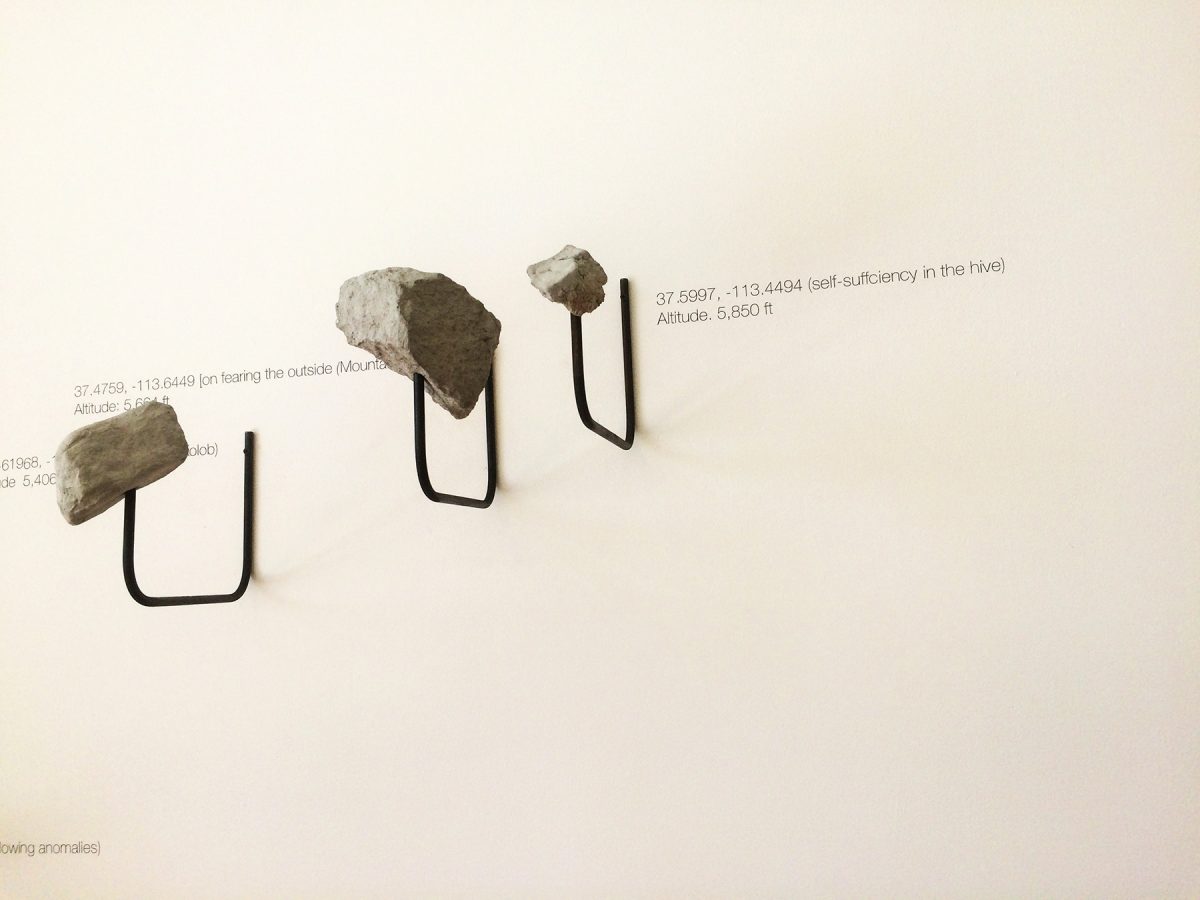 Despain’s answer to the problem is a collection of rocks. Or, not quite. Rather, her answer is in the form of casts of rocks, a “feminist” response to the male-dominated land art movement that often marked and frequently marred the landscape: Despain has taken only castings, left only footprints (though, truth be told, a bit of co2 as well, as she traveled the length of the state visiting some sometimes remote locations — such are the minefields of any attempt to be socially or environmentally conscious these days, but as Al Gore would have it, better to be a hypocrite and effect some change than to do nothing at all). These rocks are “fragments of a much larger, longer story,” Despain writes in the field guide, but the narrative she weaves with her castings is a relatively recent one, a narrative about the settlement of the state of Utah, or at least its “American” settlement, as the narratives of pre-1847 populations, whether Mexican or Native, do not appear. 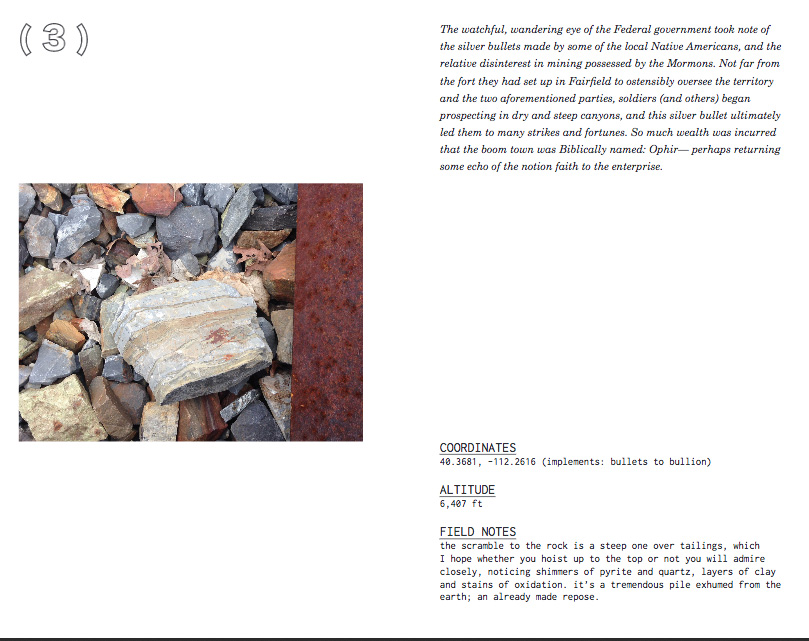 “What dark, strange narratives are couched within the romantic depictions of the West?” Despain asks at the beginning of the field guide, and her constellation of castings points to two narratives, dark or strange. Fleshed out in the field guide text, in passages sometimes poetic sometimes prosaic, Despain’s castings point to the stories of miners and Mormons that brought Manifest Destiny to Utah. The golden spike, which symbolizes the railroads that brought both peoples to Utah in large numbers, is featured, as are boom towns turned ghost towns (embodying mostly a “Gentile” narrative, as Despain notes that the Mormons were relatively uninterested by mining). There’s also the granite quarry for the Salt Lake City Temple, the dark narratives of Topaz and Mountain Meadows, uranium mines in Capitol Reef (where Madame Curie makes a cameo), the Mount Carmel highway that cuts a swath through Zion National Park, the massive Bingham Copper mine, and the BLM land secured but left undisturbed by Terry and Brooke Williams.

The way the field notes are written presumes one would follow Despain’s route, rediscover her source material: she provides an image of the rock, helpful hints for navigating trails, and a legal disclaimer. Such trips are really unnecessary, however, for the rocks themselves have nothing intrinsic to say, though their ghostly presentation here may imbue them with a certain aura. They are placeholders for the narratives Despain explores in the field guide, where the writing is strongly literary, the scientific coordinates a misdirection from the poetic quality of the work. In addition to being an artist, Despain is both a writer and a curator and her skills at both are evident here: despite being simply a collection of concrete castings of mostly unremarkable stones, the show at CUAC does look good, especially the field guide; and her writing has verve. The work is really a hybrid of the literary and the visual. It may be that contemporary artistic practice has been as dependent on the word as the visual for some time now, but Despain’s exhibit underscores the point, making one stop to wonder about the power and purpose of visual art in the contemporary context. 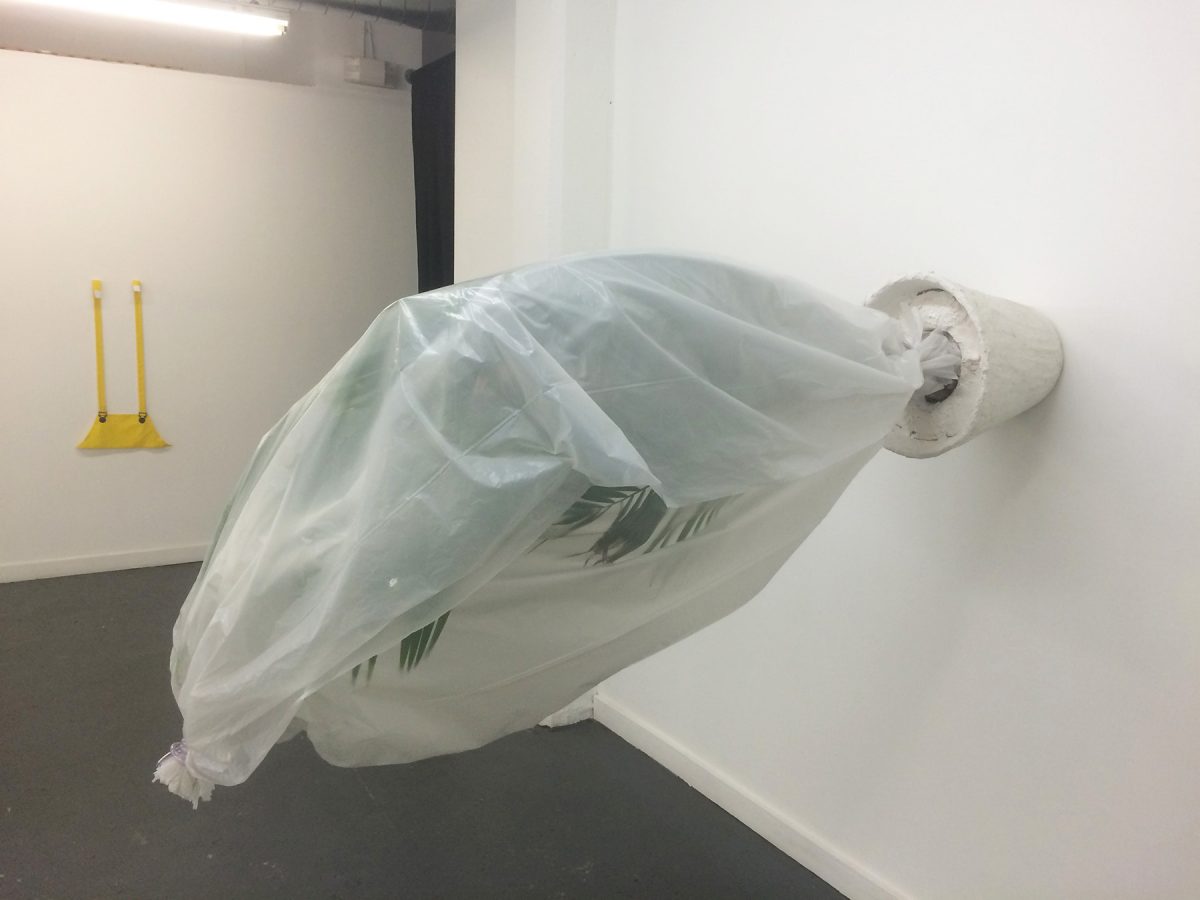 If Despain’s visual exhibit may rely too much on a textual context, Michael Handley’s may suffer from its lack. Where Despain’s text is ultimately expository, Handley’s, in the form of a statement that appears on CUAC’s website, is purposely contradictory, though suggestive:

I am at a moment where I believe art about nature cannot be made with earthy materials. Stones. Water. Plants. Dirt.

I am at a moment where I believe art about nature can still be made with earthy materials. Stones. Water. Plants. Dirt.

Nature is managed in windowsills and tabletops. Experience is exchanged for image and myth. And yet, I sense a massive cultural need and desire for the ideological fusing of mankind and nature.

The dividing trench is deep and our moves seem to excavate and widen it. We are removing material, rather than adding.

I propose image and myth be exchanged for experience.

I wish for the familiar to become strange again.

With Despain, Handley struggles with the conflict between discourse and “experience,” revealing, perhaps, a sense of nostalgia, for the artist now removed from the direct experience of the West and left to consider it in conceptual forms. Or it may be an indication of the pervasive sense of estrangement that pervades all aspects of our overly media-ted lives. 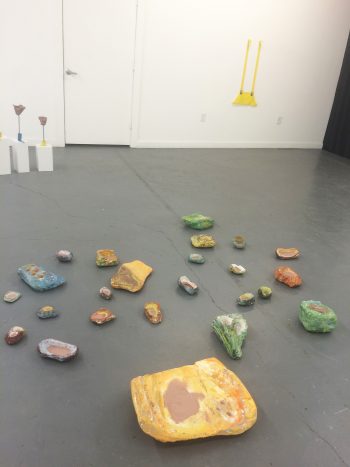 The exhibit begins in a curtained-off section where a video projection displays a shimmering form of light on the floor, suggestive of a campfire, or, as the gallery attendant corrected, a star: either interpretation suggests creation and destruction as well as the elemental experience of the landscape, beneath a starry sky or around a shimmering campfire. Behind the curtain, a series of objects, sometimes simple, sometimes crude but definitely strange and perplexing, hang from the walls and the ceiling, and are spread across the floor. As one viewer suggested, in this space Handley has created a landscape: a bright yellow rectangle of a painting hung high to the ceiling suggests the sun, while three blue-and-white images on the north wall stand in for the weather cycle and the hard, painted objects on the floor suggest the rocky landscape of a place like the Colorado Plateau. A series of umbrellas turned upward, their canopies removed and their ribs clad in clay, become plant life thirsty for rain. Less easily identifiable are the two yellow cloth pieces suspended from the ceiling, and a matching pair of suspenders attached to the wall. The potted shrub, wrapped in plastic and protruding sideways from the wall, is equally perplexing. 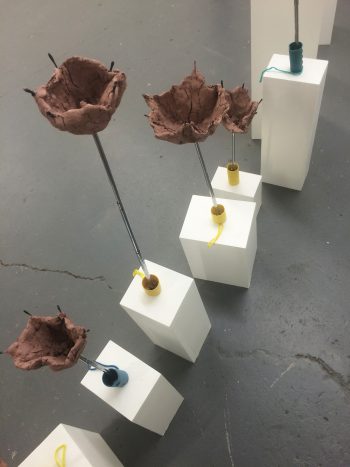 While more poetry and less prose would be a boon to the art world in general, it’s difficult to tell if Handley’s disassociating strangeness comes together in this instance. A photograph promoting the exhibit shows the suspenders and the suspended yellow cloth as a whole, a set of overalls that here have been dismantled and repurposed, suggesting a narrative that isn’t quite clear. The wrapped shrub may stand in as a cloud in our landscape interpretation, but one can’t help but think it’s more — representative of a nonnative species, perhaps, that is out of place in its landscape.  Associations emerge but we can’t quite grasp them, so as we gaze ceiling-ward at the yellow cloth, we may notice the sections of yellow foam insulation surrounding the building’s pipes and wonder if they, too, are not part of the exhibit. Is this a happy (or unhappy) coincidence? Are they plugging a hole in the ozone? Or are they the reason no precipitation reaches the parched umbrella plants below? Maybe they are simply satisfying the demands of city building codes.

One senses there is an explanation here, but can’t quite access it. The strange has not been made quite familiar enough. Handley is a compelling if sometimes frustrating artist, his works strongly cerebral enterprises but charged with flashes of poetry. There is poetry here, but the cerebral part may still be too much in the own artist’s head. Art doesn’t need to come easy, and one viewer, even an attentive viewer, may not readily absorb, in the few minutes spent in a gallery, what an artist has presumably spent months creating; but when an exhibit fails to coalesce for multiple well-informed and well-disposed viewers, as was the case for this exhibit, something isn’t working.

UNFURL STREAK by Michael Ryan Handley and seeing the stone by Cara Despain at CUAC, Salt Lake City, through June 10.