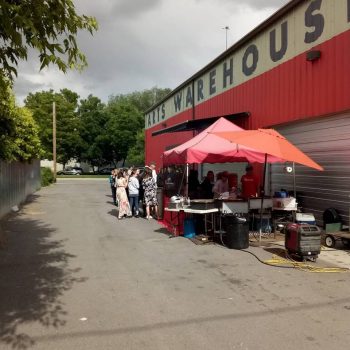 You can’t grab a good cup of Jose to sip while viewing art at Mestizo anymore. For lots of reasons, not many of them particularly interesting, the Salt Lake City gallery has moved from the popular North Temple coffeehouse where it has been housed for more than a decade to the nearby Sugar Space Arts Warehouse at 132 S. 800 West.

The board of the Mestizo Institute of Culture & Arts (MICA) deliberated the move for some time, says chairman David Hawkins, assistant professor/lecturer in English and writing for the University of Utah. “Even when we finally all agreed that a move was our best option [allowing the nonprofit to include more activities in future and, perhaps, add some rehearsal studios] . . . it was important to remain rooted in our west-side community.” Sugar Space Foundation is a new fiscal sponsor.

In addition to traditional art exhibits, they plan on adding performance art, dance, music, and spoken word, while continuing a committment to social change through dialogue, activism, and education.

This is a dandy venue to further all that activity. Several cavernous rooms share an industrial vibe and, unlike the North Temple coffeehouse, allow for very large artworks to be installed. The space, though, is utilized by a variety of organizations and the gallery typically is open just several evenings a week when other events are going on. Sugar Space Arts Warehouse founder and director Brittany Reese also will open the gallery for groups by appointment.

Presently, MICA is showing mixed-media, collage and letterpress works by Miguel Galaz, known for the West Jordan mural controversy that took place three years ago. You may recall it. 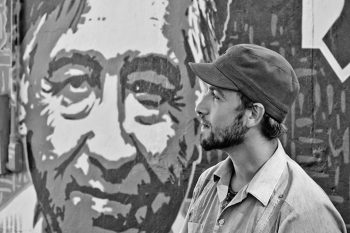 A young artist who still teaches kids at Mana Academy Charter School, Galaz wanted them to learn things like color theory by tapping into their obvious interest in the graffiti in their surrounding neighborhood. A friend of his had opened a taqueria in a rundown, graffiti-covered building, and Galaz saw an opportunity to show his students that art can enhance walls in the same way as spray paint: he wanted them to participate in creating a painting to beautify the exterior of the popular new eatery.

He also saw a chance to acquaint students and community members with their cultural heritage by featuring portraits of the founders of the United Farm Workers movement, Cesar Chavez and Dolores Huerta, who made the nation aware of the struggles of those workers during the 1960s for better pay and safer working conditions.

It was a telling piece of work where individual students (of several cultures) designed letters spelling “Cultural” on one side of the building. (“Cultura” appears again in Galaz’s current show.) There was remarkable depth to the faces on the mural, rich color and originality.

But there were, inevitably, complaints about the perceived activist nature of the work. And the city decided that art could cover no more than 15 percent of the building’s façade; the rest had to be painted over or be subject to a steep per-day fine to the restaurant owner – who couldn’t afford it. 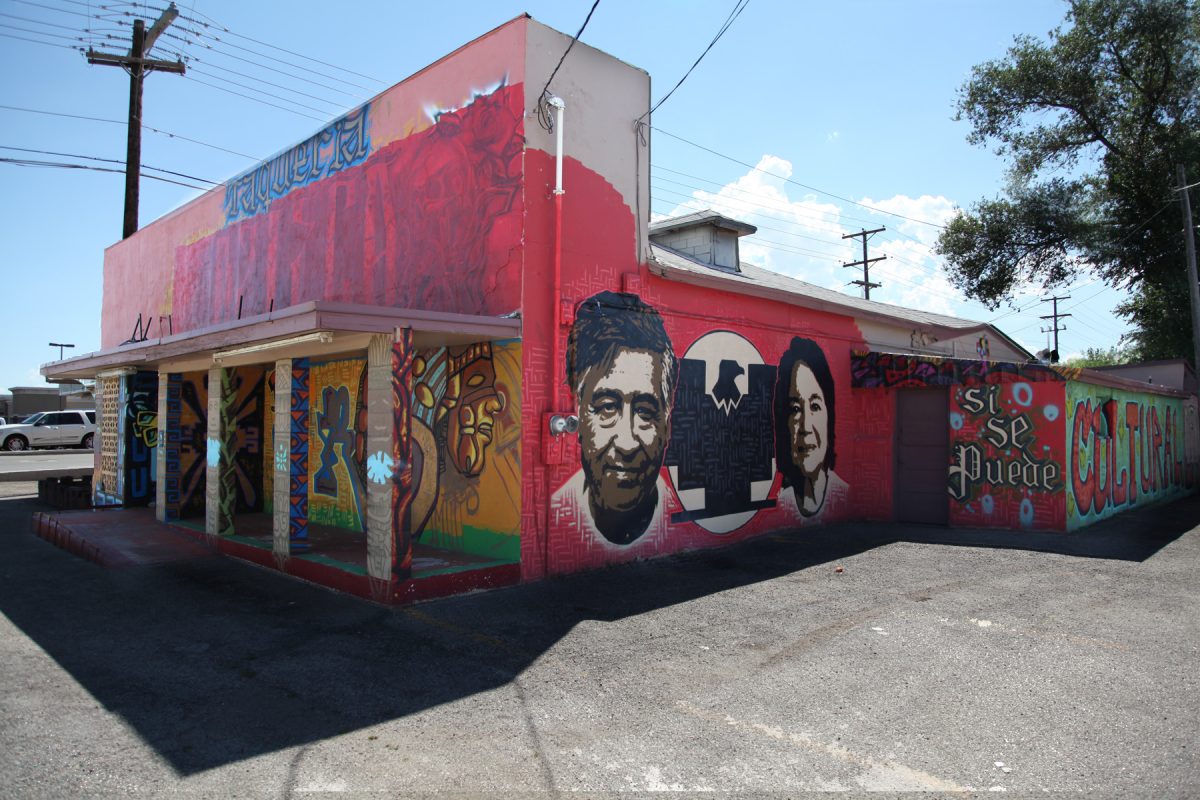 Galaz attended a West Jordan City Council meeting; the city decided to give him time to work on changing the existing code, let the mural remain and withheld the fine until matters could get settled. The matter was finally settled when the restaurant owner sold the building and a new owner covered the murals.

The artist, who is originally from Mexico, has now reconsidered his activism along with other areas of his life. “Can you imagine if it had happened today,” he asks, “with all the hatred [toward immigrants] out there?” He suspects there may have been violence, perhaps directed at him or even at his students.

“The whole event with the mural,” Galaz says, “and the controversy that went down, was a pivotal point in my career. It taught me the power of art. I started school [at the U] with an emphasis on community art. I didn’t paint anything for a while. I worked at Mana Academy and they opened projects for me where I could express myself freely – projects where I wouldn’t get into trouble.” 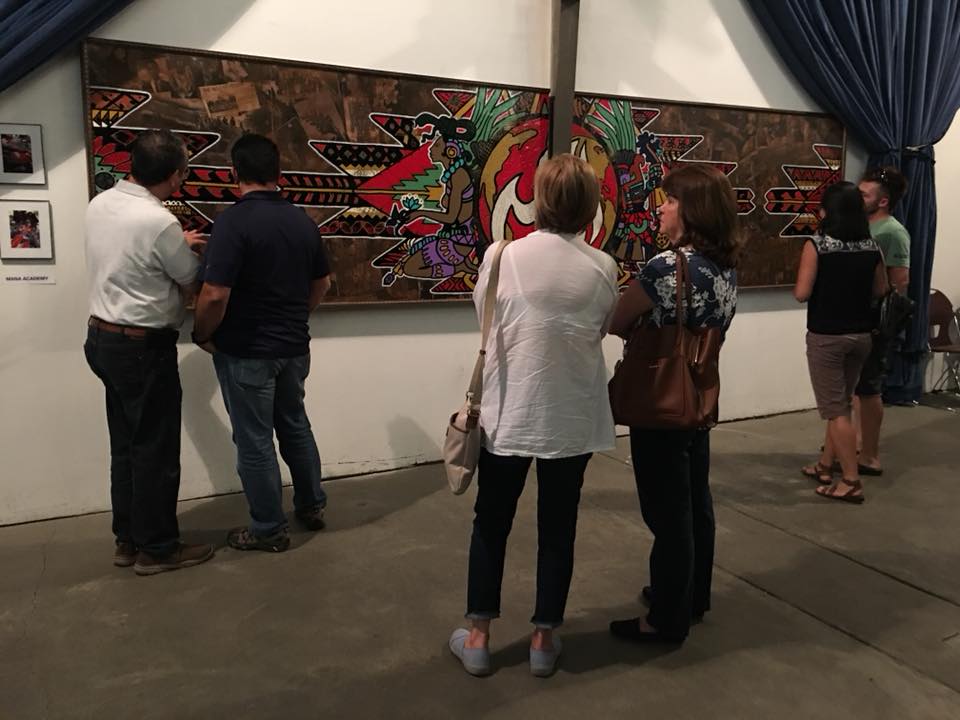 Teaching people how to paint evolved into teaching them how to use stencils to show ancestral design. The basic shapes that link people greatly interests Galaz. “I was influenced by tattoos from the Polynesian culture and that grew into how to connect different cultures by connecting ancestral patterns. I started exploring how different cultures use different patterns and how closely related we all are,” he says.

The first portion of his exhibit deals with these patterns, with migration, and, in part, is frankly autobiographical, examining the artist’s roots, including the trappings of the Catholic faith of Galaz’s childhood: pieces of wood, for example, form a powerful multidimensional cross. Elsewhere, Mexico is split into segments to represent the artist’s immigration into the United States. A “Mayan” piece is said by Galaz to recall a formative backpacking trip he took at the age of 23: “Indiana Jones, exploring,” he says with a short laugh.

The center room makes clear that activism and Galaz have not entirely parted ways. One piece spells out vertically: Walls Will Never Stop Migration. Chavez, whose two-pronged fight for migration and education is much admired by Galaz, is represented in letterpress by a well-known quote that says the fight is never about grapes or lettuce – but always about people. 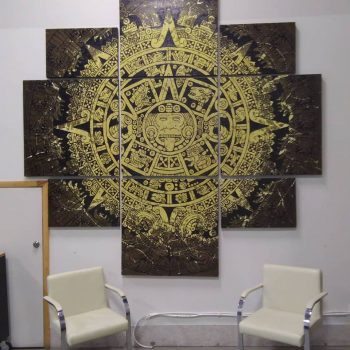 An Aztec calendar in the shape of a cross celebrates the sale of that work for $700, which gave Galaz the money to go on that backpacking trip that changed his life. “It also shows that simplicity put together can make something complex,” the artist observes.

A large part of activism for Galaz is female empowerment (he says, with a grin, that his mother is “a really strong influence”) and this led to the creation of the central piece to the show: the Virgin of Guadalupe. A vital figure to most Mexican and Mexican-American Catholics (and to many Anglos as well), to Galaz she represents Nature, “something bigger” than a religious figure and, at 4’x 8’ she really is an astonishing presence. Fronted by an altar-like blue-draped table, she has a hummingbird, a large moth and grapes at her feet. More importantly, the work starts from the Pyramid of the Moon at the base, the roots of Mexican culture, and is best read upward from there.

Other pieces include a study of Mayan designs with wood peeking through green paint in a fine diptych; “Hunab Ku,” a balance symbol, or Galactic Butterfly, 24” x 32” mixed media. The mandala-like “Cruz Del Sur” is cropped like a puzzle that you could add another piece to on all sides. It’s a star constellation seen only in South America, an Inca symbol. In ochre and pale blue-grey on wood, this 28 x 48” mixed-media work is lovely and compelling. 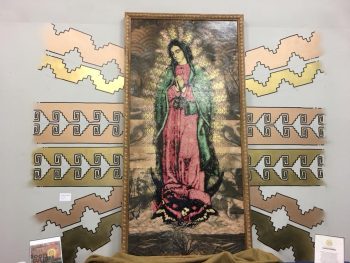 That some of the artist’s student works are included here is more apparent in the third and largest room than elsewhere. “Sabiduria” or Wisdom, 32” x 48” mixed media, is spray-painted with the eye of wisdom stenciled in the center. The 24” x 192” “Cultura Scroll” is a quote from our friend Cesar Chavez once again.

The corner walls are filled with interesting photos of public-art projects and neighborhood murals that involved Galaz and his students at Mona Academy.

Jorge Rojas, Director of Education & Engagement at the Utah Museum of Fine Arts and vice chair of the MICA board, says the organization is coming up on its 15th year in operation and plans are in the works for a quinceanera, a birthday party, on Oct. 13 at Sugar Space. Festivities will include a fundraiser featuring works donated by area artists. You will, of course, be expected to wear your very best.

From Sept. 10-16, Ecuadoran-born award-winning performance artist Jose Torres-Tamas will do a weeklong residency at Sugar Space. On Sept. 14 -15, he will present his sci-fi Latino noir performance solo “Aliens, Immigrants, & Other Evildoers” at the warehouse and, in partnership with the UMFA, offer a free public performance at the Main Branch of the Salt Lake City Public Library on Sept. 11, 6:30 p.m. Torres-Tamas also will give two workshops for K-12 students at west-side schools. 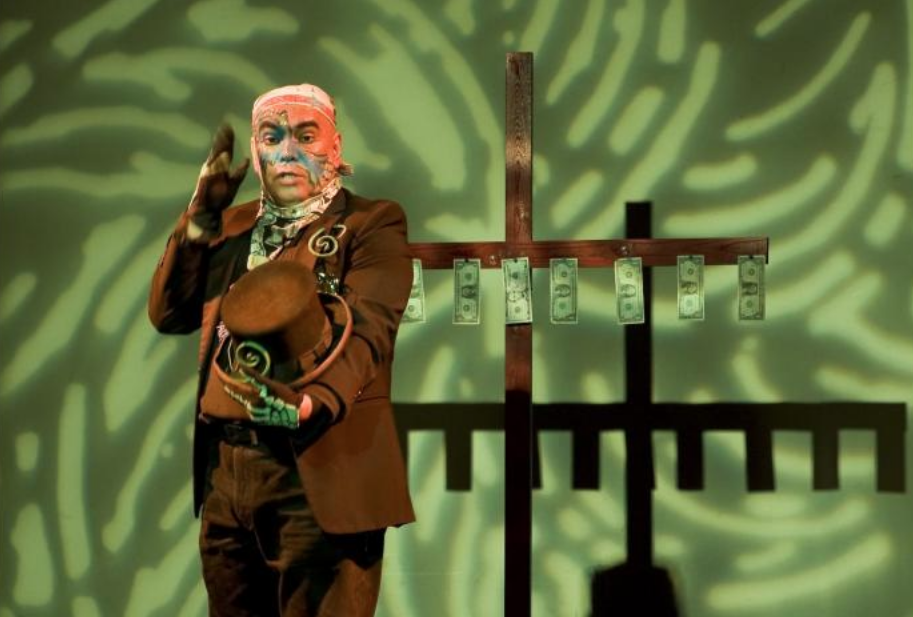 “We think everyone will find that MICA is the same civic-minded arts organization, committed to giving new voices from our underserved communities a place where they can reach a wider audience,” says David Hawkins.

But there’s still not a cup of Jose to be had – not yet, anyway.