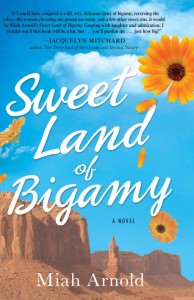 The title, sadly, does not adequately convey the richness of language and wit to be found in this charming first novel by Dr. Miah Arnold, who grew up in a house attached to the Three-Legged Dog Saloon in Myton, Utah, and now is assistant professor of English and Rhetoric, Creative Writing at Georgia College & State University.

But it does reveal just a bit of this black comedy’s plot, a story told from the perspective of a variety of quirky and engaging characters.

Set in our once and future polygamous state, the book features the rather ditsy main protagonist Helen Motes, who indeed winds up a bigamist after staid husband Larry heads off to Iraq on a contract mission from their Houston home to utilize the Arabic language skills he learned for a Church mission to Egypt. Motes returns to her tiny rural hometown where she is pursued by and ultimately marries a young Eastern Indian poet in a blissfully romantic mountaintop ceremony performed by a ridiculously funny Hindu priest while Helen is clad in a scarlet sari held together by 17 safety pins. Problem is, she hasn’t told the exotic Chakor Desai, who arrives for his wedding on a white steed draped in strands of orange marigolds (and is mistaken by a local for a terrorist), that she already has a husband. The choice Helen faces when Larry returns unexpectedly from Iraq provides edge and drama to this otherwise lighthearted but engrossing tale, beautifully written and filled with arresting imagery.

Helen returned home in hopes of making amends with her ill mother, a lifelong alcoholic who made her childhood a misery but whose love of her daughter shines through the narrative. The continuing friction between the two is a story element in and of itself and plays against the subplot of Chakor’s dying mother in India, where he spends much of the book communicating with his bride by e-mail.

It’s a refreshing and original story, about flawed but relatable characters placed in highly unusual situations that ultimately make a sort of sense. Once you are engaged with them, it’s hard to put this novel novel down.

Miah Arnold’s Sweet Land of Bigamy is a finalist for the 2013 15 Bytes Book Award in Fiction. Arnold is the daughter of Lou Arnold and the late Helen Forsberg, veteran arts writer and dance critic for The Salt Lake Tribune. She studied history at Carleton College, and earned a Ph. D. in writing and literature at the University of Houston. She teaches adults and children throughout Houston in University and nonprofit settings. Read more about the author at miaharnold.com.