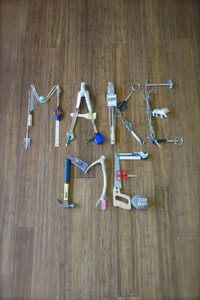 At turns dark, playful, and furiously-paced, Jean Kane’s debut poetry collection, Make Me, exhibits a whimsical defiance towards authority and the expectations of a contemporary reader of poetry. The cover of the collection is a helpful “tell”—the title of the collection is spelled out by tools and household knick-knacks (with a flair not unlike collage) on a plank wood floor. This focus on domestic objects and households is prevalent throughout the collection, and the poet seems to be telling the reader to pay attention to them. This isn’t to say Kane is telegraphing another tired visitation of Williams’ “no ideas but in things,” rather, things are both things and stand-ins for that which is untenable and difficult to pull-off in poetry.

The opening poem, “Craft,” begins with the child-like declaration and question, “let’s make a red house. Okay?” Arts and craft time continues with a sense of youthful role-playing through the naming of items such as “paste,” “manila paper,” and “pearl buttons.” Readers are eased into the violent upshot of a neighbor being beheaded and another being shot, then bleeding on a stoop, by the speaker’s youthful hope: “You say maybe the head can be pasted back. Maybe the neck can be / fastened. It’s only paper.”

As in “Craft,” objects in these poems frequently stand in for people, and vice-versa. Kane “tells it slant,” but she usually gives the reader enough to feel confident about their conclusions and assumptions.

Stylistically, this collection is hard to nail down with poems that alternate between linear narratives, short lyrics, and more cinematic and abstract pieces. A particularly-resonant example of Kane’s cinematic sense occurs in the opening lines of the poem “Shadow Academy”:

When headlights rake my wall
at midnight, part of me
slides away from my feet
and slips under doors, quick
over dark pavement.

This series of images efficiently conveys a sense of motion, a sense of secrecy, as well as the speaker’s internal conflict—not all of her is in agreement with her impulse to sneak out of the house to pursue what the poem later reveals to be shadows. Another resonant example of the poet’s cinematic imagery is in “Purse Girl,” which scathingly yet playfully describes bulimia and internalized victimhood:

Her slouch a kind of asking, the shape of a question,
her arms wrapped around her middle, face flack
ready to be slapped. Against the empty asphalt, killing time
in killing heat, time-killing heat, flip-flop thwack
like lifeguards.

Devices like slant rhyme, assonance, onomatopoeia, and repetition juxtapose a playful tone with serious subject matter. Yet Kane doesn’t lack reverence for what is at stake. Later in the poem, the stakes are raised, and we witness the subject

Dragged by the neck strap
into the heat, what press and choke—
Mouths open as far as they can go
without screaming.

The image of self-induced vomiting is transposed upon the image of a woman being forcefully and violently posed into a position of submission. Ultimately, the playful language we witnessed at the beginning of the poem only amplifies the unsettling imagery. Kane has been reading her Angela Carter, and the carnivalesque is an effective, and frequently-used tool.

This “slant” is a strength of Kane’s: addressing trauma and its causes without calling them out by name. In “Purse Girl,” it’s obvious that some force, or some person, has exerted influence onto the subject, and her sickness is an outcome—not a condition without blame. Kane certainly has chalices, like the sly feminism above, but her poems are not overwrought with them. Her decision to call attention to objects, such as the subject’s purse and neck strap, effectively muffles a reader’s expectation, the sense that they may be diving into something heavy.

Kane is adept at expressing situations of violence, danger, and conflict by dancing around the subject rather than overwhelming the reader with declarations. She typically centers her poems with regular events, regular objects, and regular roles to great effect. There is plenty at stake in these poems, but Kane successfully escapes the trappings of predictable confessionals. A prime example is the poem “One Corner of Your Room” : 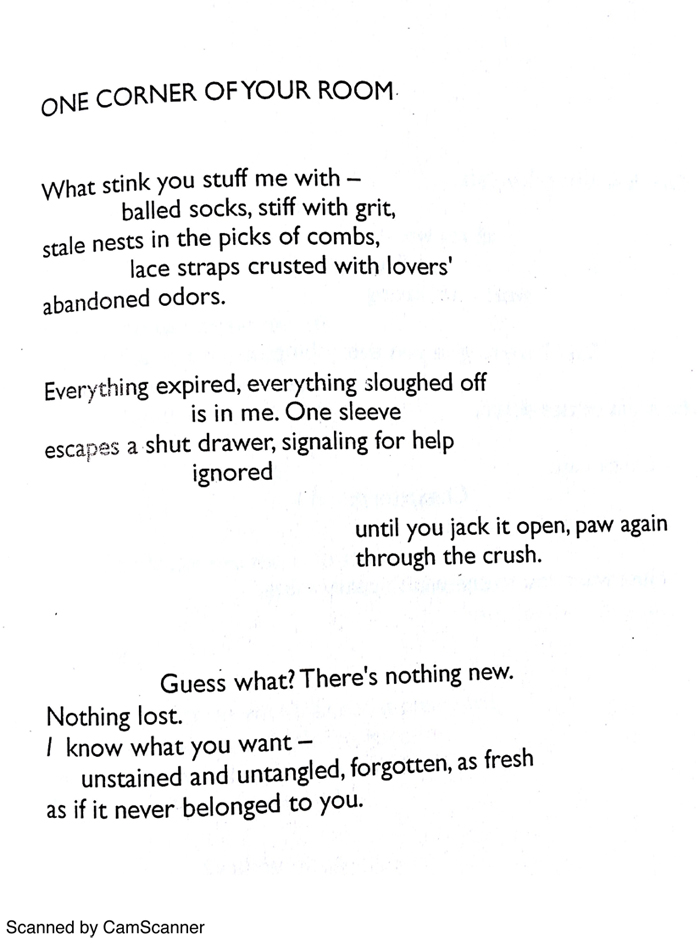 Kane personifies the messy corner of a bedroom, and this room seems to be collecting information, keeping score of the occupant’s frailties and clutter. The poet’s tendency to rely on object/person stand-ins is on full display. Few readers will gaze past the stand-ins for sexual violence, ignored pleas for help, and patriarchal control and arrogance (“I know what you want.”) A mutually-toxic relationship is deftly summoned while the obvious focus is on things like stinky socks and dirty combs.

One challenge contemporary poets face is the expectation to craft manuscripts of poems that are directly interrelated. Whether by topic, tone, craft, setting, or theme, poetry collections are expected to display some sense of intent—some reason these poems belong together, tucked between the same cover. This expectation also informs the judgments of poetry readers and reviewers. The question “what ties these poems together?” seems to be as (or more) prevalent than “are the poems in this book any good?” Kane gives us just enough of several threads to feel that there is a “long con” taking place, but ultimately, the emphasis of the book is on strong poems that stand out from each other. This isn’t a concept manuscript like you might see from poets like Cole Swensen or G.C. Waldrep, but Kane’s use of negative space, abstraction, and juxtaposition certainly shows an awareness of such craft.

The poems in Make Me are, by and large, either good or very good poems. Kane employs varying-degrees of transparency and abstraction that give the reader just enough of a sense of what’s at the heart of these poems. I found myself turning the pages quickly, eager to see and feel where I would be taken next (not necessarily to know what happens next). There is something of a fragmented narrative contained in the book, one that concerns the physical and psychological trauma experienced by a young female speaker. But Kane actively resists training her lens on it. Digesting this thread requires a lot of dancing back and forth in the collection. It would be cheating to break it down for you. This could irk some readers, but I found the varied stylings and subjects rewarding.

The biggest gripe a reader might have with the book that is independent of any preference, and it’s a minor one, is typographical in nature. It’s not clear whether this is done with intent by the poet or publisher, but hyphens, double hyphens, and en dashes seem to take the place for what should probably be em dashes. There are also a handful of missing character spaces after full stops. Kane’s tendency to look at things sideways makes me hesitant to declare these typographical features a mistake, but even if it is with intent, it’s hard to say that anything is gained by such a choice.

Nonetheless, Make Me is a collection worthy of your time. Kane has an expansive tool kit and a strong sense of poetics and affect. I look forward to reading more of her work. 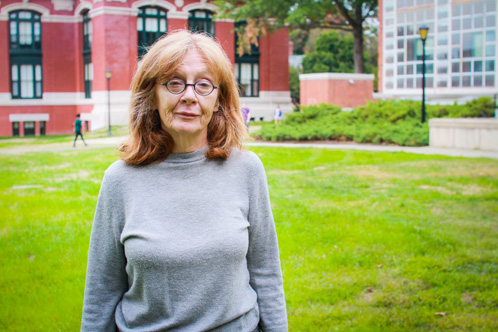 Jean Kane was born in Brooklyn and grew up in the midwest. She now lives in New York, where she teaches literature and writing at Vassar College. She writes poetry, fiction, and critical essays, some of which have appeared in American Short Fiction, the Georgia Review, Hotel Amerika, and Prairie Schooner. Make Me was the winner of the 2014 Otis Nebula Poetry Prize.