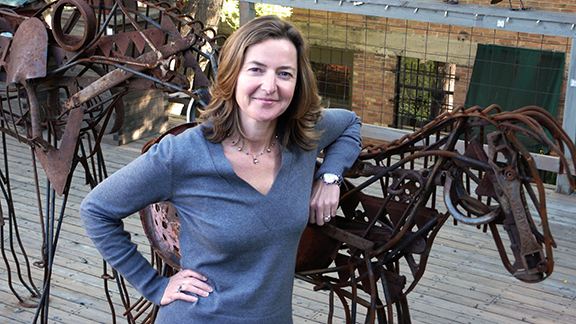 Meri DeCaria on the sculpture deck of Phillips Gallery, photo by Stephen Seko

Meri DeCaria’s art reflects her life — at times whimsical and colorful, other times thoughtful and controlled. People may know her as the professional, somewhat reserved director of Salt Lake’s Phillips Gallery, but beneath the formal surface her life is teeming with energy and vibrancy.

DeCaria grew up in Minnesota with three siblings. Her parents divorced when she was very young and the kids were raised by their dad. “He was a lawyer and a workaholic,” DeCaria says, “so we got to run wild.” When not working, however, her father exposed the kids to lots of culture — music, art, and bee keeping. 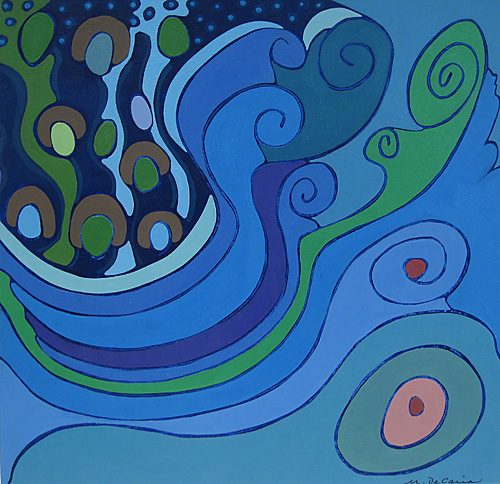 When DeCaria was a young teenager, she was also exposed to art, when her father married the author Mary Higgins Clark. DeCaria says Clark was the one who made her realize that someone could actually make a living as an artist.

DeCaria says she’s always had an eye for color and creativity, and it appears to have its roots in both the “nurture” and “nature sides of her life. In addition to being raised around art, DeCaria discovered the “nature” connection about five years ago. She and her sister were both adopted at birth. Since her sister had experienced a successful search for her birth mother, DeCaria decided to give it a try as well. When she found her birth mother and family, she discovered that art was in her genes for at least three previous generations. “I’ve got aunts, great aunts, and great, great grandfathers who were artists,” DeCaria says.

Because she always loved art classes in school, DeCaria went to college at Pratt Institute in Brooklyn, New York. She had become interested in the fashion industry through a course in high school. “My family lived in New Jersey at the time,” she says, “so taking the train into Grand Central Station once a week was exciting. I experienced independence and got a taste of what it meant to be involved in the fashion business.”

DeCaria continued to pursue her interest in fashion merchandising at the Philadelphia Art Institute. “I wanted to be a buyer,” she says, “but discovered that you have to be really good at numbers, and most buyers end up going to New Jersey to buy men’s socks. Only the really top buyers get to go to Paris, which is what I wanted to do.” She acknowledges, however, that the Art Institute was where she acquired the skills to be a good sales person and shop manager.

Her disillusionment with fashion merchandising led DeCaria to The American College in London where she received her BFA. She studied color theory and design and took painting as an elective. “That’s where I discovered I wanted to be a painter,” DeCaria says. “I painted and painted late into the night.”

London opened DeCaria’s world not only to art but to travel. The city was “life changing,” she says. “I was there for two years and never tired of exploring the maze of streets. I saw tons of incredible art shows at the various museums. I also got to make trips to Paris, Copenhagen, Switzerland, Ibiza, Greece, Madrid and Barcelona.”

After London, DeCaria moved back to Minnesota to help her father run his campaign for a US Congressional seat. “It was my first job out of college,” she says, “and I was the volunteer coordinator.” She also dabbled in the art field by working in galleries, but the siren call of the West arrived in the form of a boyfriend who was a wrangler. “I went West, young woman, to Togwotee Mountain Lodge in Jackson Hole, where I ran the front desk.” She laughs and says, “I really got into the Western lifestyle. I bought cowboy boots, a belt, ate good food and went Western dancing.” She didn’t get much painting done, though. “I lived in the dorms,” she says, “and every time I thought I would paint or read the newspaper, someone across the hall would say, ‘Wanna have a beer?’ I had a whole stack of New York Times that never got read.”

In between the front desk, pack trips with her boyfriend and partying, DeCaria says she moved closer to the art world again by working at the Grand Teton Music Festival. “My dad took us to symphonies when I was a kid,” she says, “so it was great to work at the Festival. I got to go to all the concerts.”

In 1990, DeCaria moved to Salt Lake City when her boyfriend decided to attend the University of Utah. She worked for the former Dooley Gallery in Park City and sold ski tickets on the side. “My claim to fame,” she says, “is that I once sold a ski ticket to Candace Bergen. She had goggles on, so I didn’t know it was her until she gave me her credit card.”

A breakup with her boyfriend eventually ensued, and DeCaria found herself painting vigorously as a cathartic reaction to her broken romance. She bought a sorely neglected house in the Marmalade District of Salt Lake, and spent her time renovating it. During this time she was also working for Bonnie and Denis Phillips at the Dooley and at their Pierpont and Courtyard galleries. In 1993, when the Phillips consolidated their galleries to the current location on 200 South and the previous director, Rene Fitzpatrick, left the position, DeCaria became the gallery director. 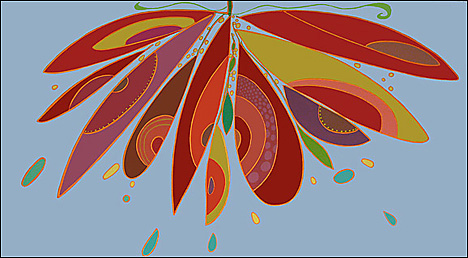 In her early days at Phillips Gallery, DeCaria says she and the Phillips concentrated their efforts on opening the upstairs, expanding the exhibit space and adding the sculpture deck. “My focus was on placing art and building clientele. We had become known for creative shows and innovative ideas, but I was excited about bringing our numbers up and expanding our base.”

Eight years ago DeCaria’s life took another twist when she married Ogden-born-and-bred Mark DeCaria. “I made the ultimate sacrifice for love and moved out of my Marmalade house and up to Ogden,” she says. “I don’t get to see some of my Salt Lake friends as much, but life is good. Mark and I love to travel, golf, hike, bike and ski. The dust never settles lately as we are always keeping up with friends, family and the fun things we do in life.” 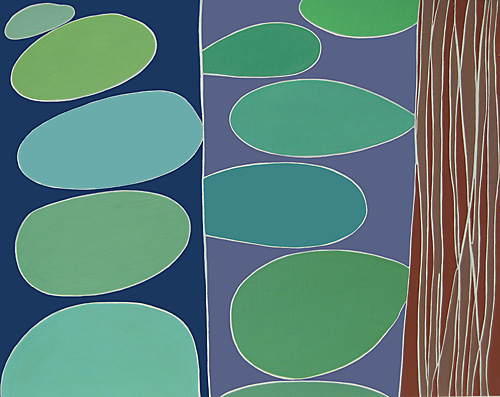 Not unlike her life, DeCaria’s art has also taken some twists and turns over the years. She says that Rene Fizpatrick saw her paintings when she first began working for Phillips and encouraged her to market them. “I had my first show at the Avenues library,” DeCaria says. “I bought frames at the DI, spray painted them black and put them on my paintings. My average price was $60, and I sold several of them.”

DeCaria has continued to show her work at Phillips and elsewhere, but two years ago reached a much wider audience when a painting of hers was selected by the Utah Arts Festival for advertising, banners, and festival guides. Festival visitors were greeted by vibrant blasts of color and a general sense of gaiety as they wandered the grounds. Lisa Sewell, Director of the Arts Festival, cites the use of DeCaria’s art as a turning point in their marketing strategy. “We always hired a graphic designer to advertise the Festival,” says Sewell, “but that got old after a while. We really wanted to reverse the process and start with a piece of art created by a Utah artist. When we used Meri’s art in 2008, we felt like the Festival developed its own personality and we added depth to the whole experience. She really put a face on what we did that year.” 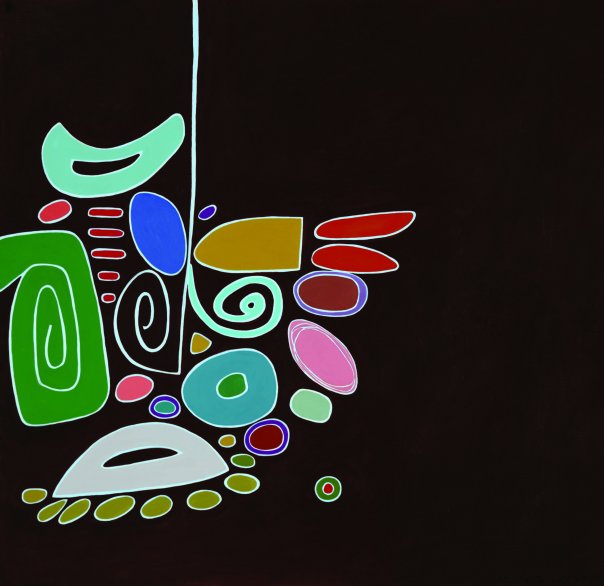 DeCaria’s work is also moving into the mainstream courtesy of Uintah-based Beehive Cheese Co. The two friends who own the business saw DeCaria’s painting “Hive” and purchased it to use as the design for packaging their rusks — twice baked snack breads that mimic the triangular shape and texture of the painting. The rusks have been a gastronomical hit and have expanded beyond local availability to other states and the Williams Sonoma catalog. Plans are in the works to expand internationally as well.

What’s next for DeCaria’s life and art? She is unsure, but says it will probably involve some travel with her husband and more art, of course. She’s looking into the possibility of marketing selected paintings as designs for high-end rugs. “People say my art makes them feel uplifted and happy, and I like that,” she says. “I’ve had kind of a complicated life, but I hope the joy I feel about it translates into my artwork.” 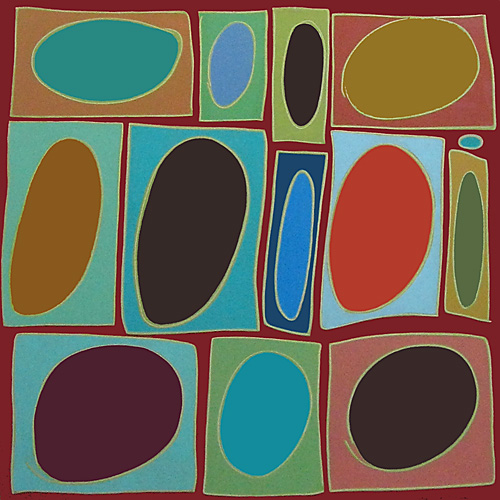 DeCaria’s art is currently on display at Phillips Gallery through October 9 along with abstract paintings by Nel Ivanich. DeCaria was interviewed in our On the Spot feature in our April 2008 edition.