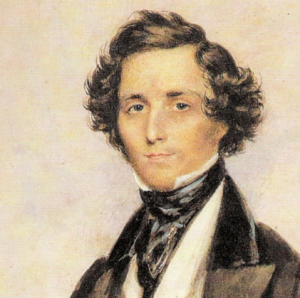 You may not have realized it, but this has been a season of Mendelssohn for the Utah Symphony. Music Director Thierry Fischer programmed Felix Mendelssohn’s five symphonies for the 2012-2013 season and this weekend the Symphony will conclude the performance cycle with a concert featuring the first and last symphonies by the composer. One of the most gifted musicians of all time, Felix Mendelssohn may have a special resonance with Utahns, for several reasons. As Dr. Roger Miller notes: “He was of the same generation as many of our own city’s founding fathers. And after an incredibly productive but very brief life of only 38 years, he died on 4 November, 1847, just as the first Utah pioneers were settling in for their first winter in the Valley of the Great Salt Lake.”

The works on this weekend’s program were written only six years apart but they display Mendelssohn’s gifts as a diverse composer. No. 1 is reminiscent of Mozart and signifies the genius of the Mendelssohn’s abilities, while his Reformation was written for the 300th anniversary of the Lutheran Augsburg Confession. It includes the popular hymn “A Mighty Fortress is our God.”

Fischer and Toby Tolokan, Utah Symphony Vice President of Artistic Planning, will present a free pre-concert chat each night, one hour prior to the start of the performance on the orchestra level of Abravanel Hall.

Single tickets for the performances range from $18 to $53 and can be purchased by calling (801) 355 ARTS (2787), in person at the Abravanel Hall ticket office (123 W. South Temple) or by visiting www.utahsymphony.org. Season ticket holders and those desiring group discounts should call (801) 533- NOTE (6683). Ticket prices will increase $5 when purchased on the day of the performance.

If you have trouble saying goodbye to Mendelssohn, you’re in luck. Utah Chamber Artists will showcase Mendelssohn’s choral writing talent on the evening of Monday, February 25 with the lesser known Psalms 114 and 115.

Mendelssohn is regarded as a star of great potential that never fully formed, and whose music — especially his choral music — never achieved the ultimate measure of its promise.  Dr. Miller clarifies “The problem, according to this view, was not so much that his talent waned or that he peaked too soon, but that his extraordinarily busy life and multiple interests outside of composing left precious little time for developing his inherent skills. Consequently, the musical world — not quite sure what to make of him — periodically mounts efforts to revive his music and resurrect his reputation.” Dr. Miller describes this issue as “mostly academic.” Utah Chamber Artists Artistic Director, Barlow Bradford compares his choral writing to Bach’s — “except prettier”.

Mendelssohn remained a devout Lutheran throughout his life. However, his setting of Psalms 114 and 115 for chorus and orchestra show his respect for his Jewish heritage. They represent a type of choral sound that was the primary model for sacred music and hymnody, especially in England and America, for more than a century after his death. These two psalms, along with four others — Psalms 113, 116, 117, and 118 — are part of the Jewish “Hallel” (“Praise”) — a sequence of six Psalms commemorating Israel’s deliverance from Egypt that is chanted at important festivals or holy days associated with leaving Egypt, such as Passover, Shavuot (receiving the Torah at Mt. Sinai), and Sukkot (Feast of the Tabernacles) and, recently, other events celebrating divine intervention in the salvation of the Jewish people.

Also on the program is the celebrated and spirited “Hebrides Overture” performed by the Utah Chamber Artists orchestra.

Single tickets for this concert ($15 Adult / $10 Student) are on sale at the Kingsbury Box Office:  801.581.7100 or kingtix.com. Ticket prices will increase $5 when purchased on the day of the performance. For more information on this concert and to purchase tickets please visit:
http://www.utahchamberartists.org/concerts/winter-concert/