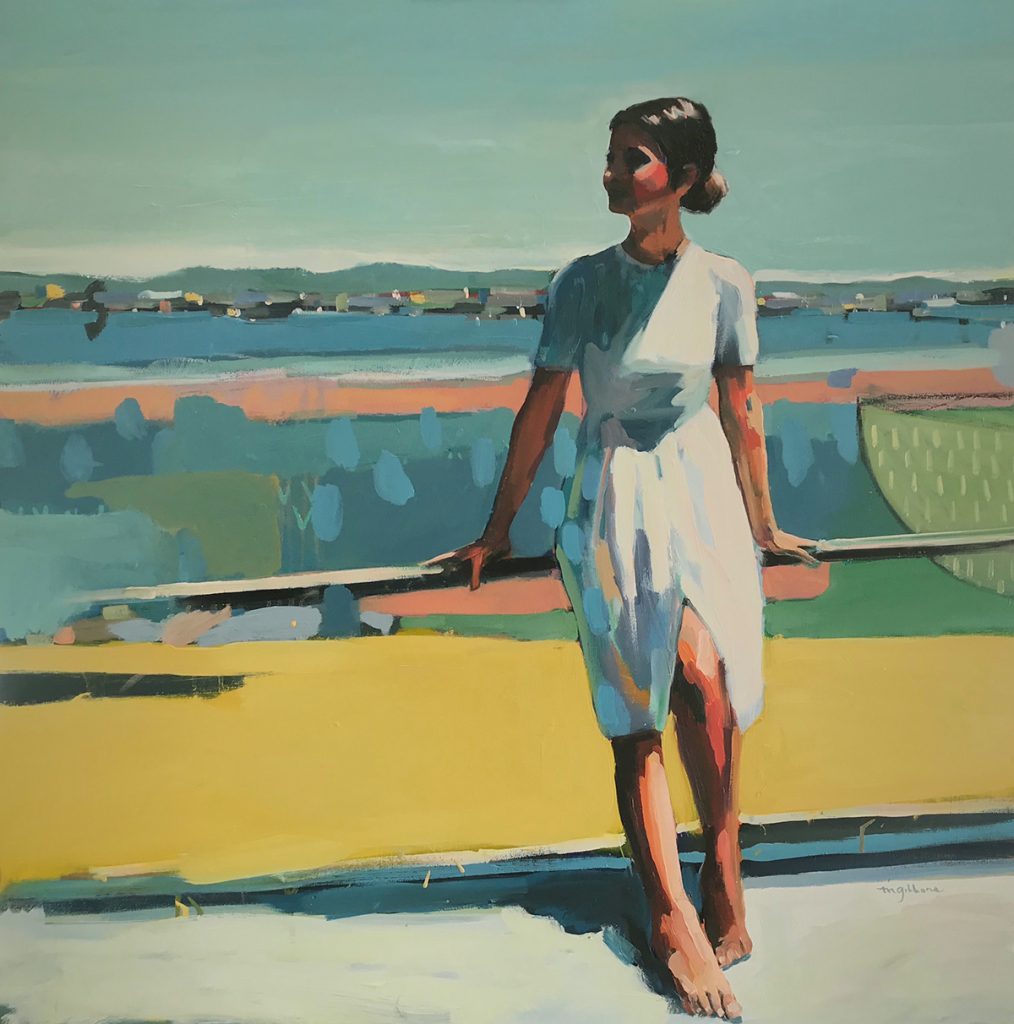 A jewelry display by Kristie Krumbach (bracelets, earrings) glowing center-stage beneath the halogen at Phillips Gallery is a perfect counterpoint to the paintings of women by Megan Gibbons: not a one of the several lone women in the latter’s large oils on canvas is wearing a ring. Or a bracelet. Or necklace. Or earrings. One, possibly, holds on to a seaside hat.

Each woman painted by the former Californian has a classic Now, Voyager look, as if, like Bette Davis in her broad, beribboned hat, contemplating a life-changing cruise. Unburdened by handbags, friends, dining companions, children — even without jewelry – they each have reached the self-declarative-goddess look of fashion illustrations of old — sketches of tall thin women wearing dramatic, expensive, elegant garments in large-city newspaper ads; women who looked brim-full or Bette Davis-full of what is now called agency (new code word for self-determination, self-power: the sea-goer cool).

Contributing to this seagoing look are Gibbons’ long painted horizontal strands in some paintings’ backgrounds: cool blues and greens suggesting islands, harbors, piers. Even when her figures are in chairs, somehow they still look outdoors, on deck. Simple garments and no adornment may also definitely be this agile painter’s way of expressing human figure with as little interruption as possible; and to avoid nudity — historically a male artist’s invasive and almost harem-claiming territory (also a warning statement from men, through the centuries, that art is, and would be kept, a men’ club.)

An ability to draw or paint feet and hands well is what separates, as they used to say, the men from the boys among sketchers, painters. But Megan Gibbons has no lack of adeptness; she paints and draws feet and hands and the whole body inventively, fearlessly, using abstracted shapes which most artists might never guess would work to convey muscles or bones beneath skin, but expertly do. Hands, crossed in “Celeste,” leaning onto a railing in “Hoop and Arrow,” or supporting a model as naturally as if on sand in “Retire,” are worth paying attention to in these paintings. Feet, also, in Gibbons’ paintings, are particular wonders: insteps so languorously extended they become beautifully stretched outsteps; toe boxes, ankles, calves, shinbones rendered so expressively you know why her models are lucky to be shoeless. 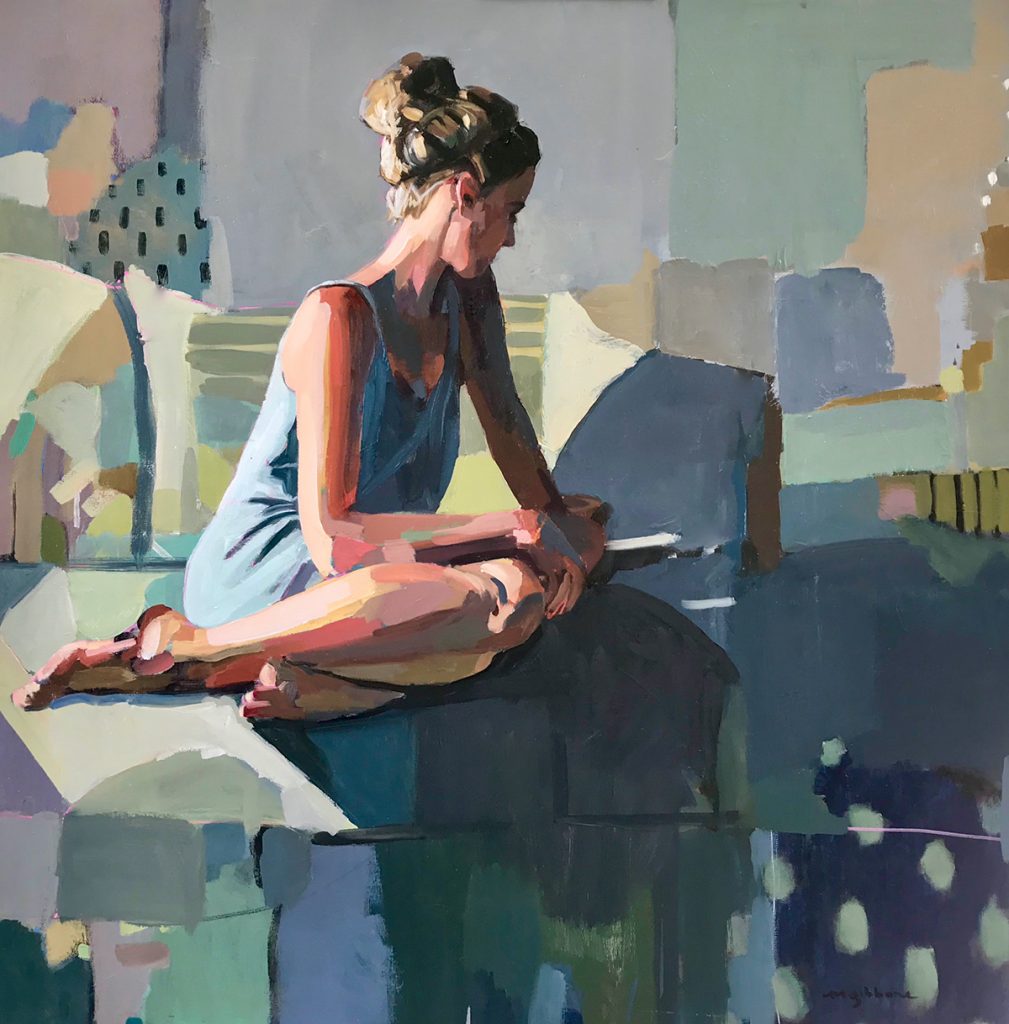 Her models’ clothes are plain, almost childish, exuding a ballet-practice simplicity, necklines gently or deeply rounded, scooped. (Simplicity, they say, is elegance.) Each model’s hair is upswept or held tautly in a bun, classic ballerina style to expose line of neck and shoulders, the whole body’s gestural line. This simplicity allows the focus to be on the body. But your impression toe to head is these models/women look like authors, actresses, artists: thinking, brooding women. These women look at least as intellectual as sexual. (If only some of these models could be beyond child-bearing years; that would be fine to see.)

But especially because these women are young, Emily Fox King’s huge floral paintings surrounding them are a harmonious, supportive accord of where women this age are in life, that high-flowering stage, settled into romances, and, possibly, mothering more than a mate. King’s paintings of flowers are painterly riots; her titles, like “Fruits of Labor” and “Practice Makes Better” and “All the Beauty You Will Ever Need” and “Time Immemorial,” are reminders of fertility, beauty, and biological clock. The bright, modern, stylistic flowers, pale-brilliant and shadowless, are throwing themselves at the viewer or at space, and are contrasting with deep shadowing of figures of Gibbons’ paintings.

Each woman, really, seems to be in conversation — with shadow. Shadow darkens to blackness almost half of the painted women’s figures. Shadow, not just their downcast or blinking-into-distance eyes, convinces you each woman is deep in thought, thinking of something much bigger than herself, in the dark and light of meditation, introspection, arrangement of thought. 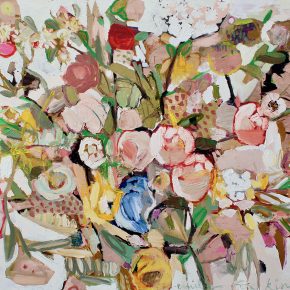 “Going All In” by Emily Fox King 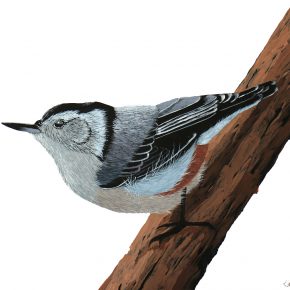 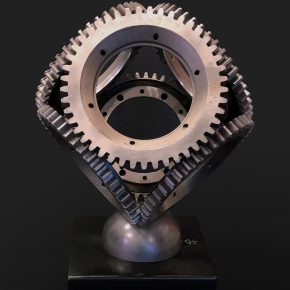 “Geared Up” by Dan Toone

Mark Knudsen’s framed series of smallish, but not too small, acrylic-on-paper, plump and vital, brown-and-white birds perched on branches, with simple species titles (“Titmouse,” “Mountain Chickadee” and “Black-Throated Sparrow”) echo the theme of lone creatures making their way in the natural world: each in his drawings is as lone as each woman in the paintings.

Dan Toone’s small to huge metal sculptures — with titles like “Squared II,” suggesting mating and childbirth, “Confined” suggesting being owned and overcrowded, and an abstract metal bouquet called “Let’s Talk About It” looking like the definition of monogamy, a “forever bouquet” — are fine ironic co-points here, too.

In summary and question: Gibbons’ women, surrounded by bouquets, sculptures, jewelry, darling birds are posing. Yet, are they? Gibbons says in her artist statement many are hired models; others are drawn from old family photographs. But in their simplicity and their gracefulness they’re in the poses people naturally and beautifully always fall into oceanside. Look at any photograph of anyone by the ocean: they’re always unbelievably graceful and in repose. Faces may squint away from the sun, as one or two of Gibbons’ models do, but bodies are as if wave-and-light-and-breeze-hypnotized by the sea and in a reverie of relaxation and introspection. 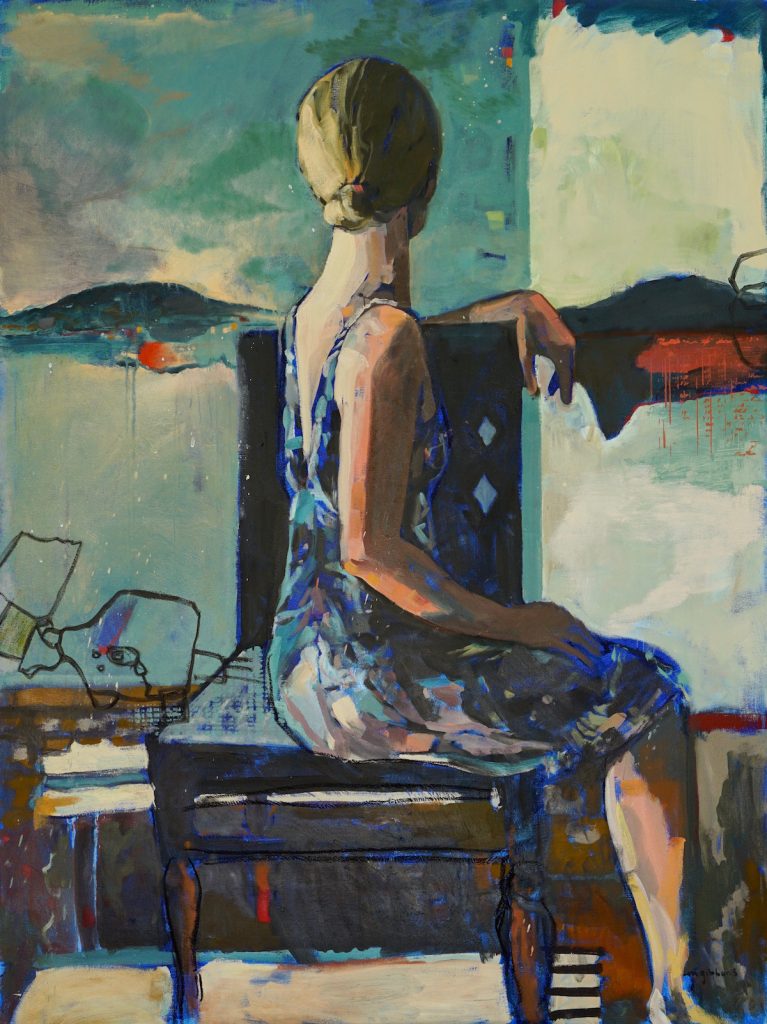 We’re more than ourselves by the ocean, and Gibbons, from California, is drawn to and remembers, certainly, that oceanic pose. Though her figures are in dresses of almost severe Chanel-like simplicity, that simplicity also means they — and Chanel’s women — are almost in bathing suits, similar in many ways to ballet costumes, too, which need simplicity and purity of line to show off the body and ensure few restrictions to movement, as a dancer or sea-goer or the liberated-from-fussiness modern woman would either demand or need. A request not to be equal to men, in their comfort of clothing, but even to exceed theirs.

Key to the Chanel look, embodied perhaps best by Audrey Hepburn, were layers and layers of eye-riveting jewelry, some from Tiffany’s but also playful, lovely or even slightly ridiculous layers of “costume jewelry” — these effectively distracting you from noticing that the little basic black dresses were, minus ornament, daringly like utilitarian bathing suits or dancers’ practice clothes. Almost sci-fi modern, letting the figure comfortably shine. Jewelry dressed them up: jewelry distracted viewer and even the wearer, making her feel braver, more playful. Jewelry made these clothes acceptable, allowed you to layer status symbols and symbols of artistic, symbolic thought — modern art in themselves — over plain and mostly practical attire, which said to men “me, too” — and let them at the same time declare they were not dull peahens, but birds of audacious and daring plumage. As Frank Lloyd Wright’s houses and buildings let the human figure shine inside them, against strict, spare, straight lines, so did Chanel’s daring new clothing, not much different from the plainness of garments seen here. But here, no jewelry: only one possibly seaside hat.

We, viewers of Gibbons’ paintings, have the privilege of being at the sea-stage-theater with her models, all young women in the luxury of being young. All ready at some point, for adornments. Here at Phillips Gallery their retinue is the adornments of birds, flowers, metal sculptures (many of Toone’s look a great deal like large jewelry), and small jewelries displayed to be chosen, center-ship, from an illuminated glass case. 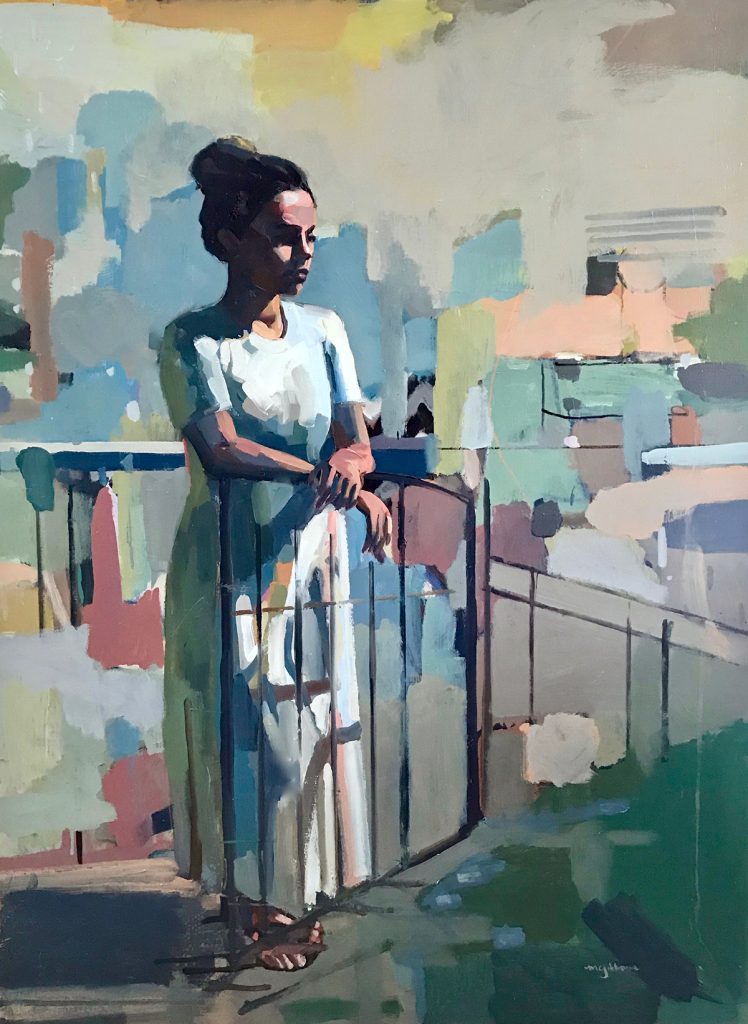