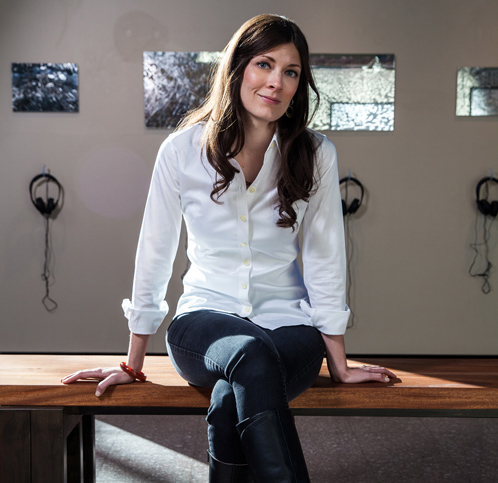 Felicia Baca at the Rio Gallery, photo by Simon Blundell.

Felicia Baca, who has succeeded Laura Durham as manager of the Visual Arts Program of Utah’s Museum and Arts division, is happy and excited to be a public servant. In fact, that’s one of the things she finds most intriguing and challenging about the position she’s held since October 2012.

Prior to assuming the manager position, Baca had worked in the department since April 2012. This new job is the perfect confluence of art, culture, and social science for Baca, who earned her bachelor degree in social sciences from Westminster College, with a minor in art and art history. Wanting to explore further the ways that contemporary society interacts with the arts, she found an ideal graduate program at the University of London’s Goldsmith College. She earned a master degree in education with an emphasis on visual culture and contemporary art, then returned to the U.S. and Utah to settle down and start a family.

She’s just a bit hesitant to talk about her vision for the Visual Arts Program under her leadership because she is so determined to see it evolve through a democratic process involving input from artists and the art-loving public. She likes nothing more than to sit and brainstorm with artists ideas for the Rio or Alice galleries, which are part of her portfolio of responsibilities. Though both galleries may show some of the more than 1,400 works in the state’s art collection, their success and relevance to the community really depend on community input and participation.

When Baca went off to college, she considered studying biology or neuroscience, but a few classes in social science, anthropology, and art convinced her to explore arts and society. “Artists ask important questions about what’s happening in society. I was really drawn to that idea,” says Baca. And she believes those artists who engage in social activism or interact with society in other ways are really important to contemporary art making. Studio classes in documentary photography reinforced her interest in art as social commentary.

While in graduate school, Baca worked in Tate Britain’s interpretation and education department where she was primarily responsible for “peer-led youth groups whose mission was to engage other youth and prepare them for careers in museums.”

When she returned to Utah, Baca got involved with Youth City Artways, eventually becoming the director. She managed a team of 40 teaching artists. Much of their work was curriculum development and teacher training. It served all the arts, including dance, visual art, theatre, and new media.

She has also worked with museums and educators on curriculum development. And she worked as curator of education and public programs at the Utah Museum of Contemporary Art before joining the Visual Arts Program two years ago.

“I’ve done a lot of work in the museum context, and the work that is really exciting and relevant to my position now is that there is now a close overlap between curatorial and education departments. That role of interpretation, along with high level coordination, is valuable to me here,” says Baca.

Indeed, curriculum development for the department’s traveling art exhibits is part of her job. When the exhibits travel to schools and libraries, teachers can download curriculum plans to use with students.

The biggest part of Baca’s job is managing the gallery and exhibitions programs for both the Rio and Alice galleries. She works with artists from start to finish, from concept to presentation and welcoming guests on opening night. She particularly enjoys playing matchmaker between artists whose work would show well together. “We get a lot of proposals where we don’t just select one artist, but introduce them to other artists and encourage them to develop a concept together,” she says. “We can help artists with their concept and proposal writing, as well as connections with other artists.” A selection committee made up of Museum and Arts employees reviews the proposals and selects those for exhibition. Calls for entry are announced twice a year. February 4 is the next deadline; the next will be in October.

Baca also manages the annual statewide competition which alternates among three categories: painting and sculpture (to be held in November 2014); mixed media and works on paper; and photography and craft. An out-of-state juror selects the show from all the entries submitted.
The current exhibition at the Rio Gallery is a prime example of another part of Baca’s job: curating special exhibitions. This exhibit, titled Only Light, is a collaboration with the Office of Multicultural Affairs, which asked for help coming up with a special way to commemorate this year’s 85th anniversary of Dr. Martin Luther King, Jr.’s birth. Planning began more than a year ago. A small committee met to consider some of the issues past and present, in the U.S. and abroad, that relate to the spirit and civil rights accomplishments of Dr. King.  From there, Baca and the team reached into the state collection, reached out to Utah artists, and asked for recommendations from organizations dealing with social justice and diversity issues.

The resulting exhibit includes two-dimensional oil paintings, sculpture, installations, digital, and other media. Works were drawn from the state collection, from artists whose existing work could be recontextualized for this exhibit, and from artists who proposed to create new work specifically for this show. The works focus on such issues as class and race inequities revealed in the aftermath of Hurricane Katrina; communities galvanizing for peaceful protests, such as activist Tim de Christopher’s trial in Salt Lake City; and art-making facilitated by Utah artist Trent Alvey with women and children in Rwanda. There’s even an installation by Beth Krensky that celebrates the bridges built by matriarchs of biblical times: each woman’s name is inscribed on wooden balls made of olive wood cut down to make the wall between Israel and Palestine; each ball rests on a pile of salt from the Dead Sea.  The exhibition runs through February 14 (see our right hand column for a commentary on one of the works).

The visual art division and the Office of Multicultural affairs also collaborated on promoting the exhibit. Baca noted that the opening reception during January Gallery Stroll attracted a larger and much more diverse audience than most shows at the Rio. She was delighted. “It’s important to me to make this a space that’s not only accessible to artists but to the community at large.” She calls the show a “successful collaboration” and looks forward to more.

Baca considers her greatest opportunity and greatest challenge to be the same thing: reaching a diversity of artists who will participate in visual arts programs. “It’s an opportunity to be defined by the public and by some of the most exciting artists working in Utah,” says Baca. “I’d really like it if artists in the community would email and tell me what they’d like us to do differently. We want to be a resource to them, so it’s really important to get that kind of feedback. We have a lot of artists who are a constant resource for us and there are others who don’t engage with us for some reason. I’m still learning about those reasons.”

Baca wonders how to cast the widest possible net to reach the diverse artists who would benefit from her department’s services and who would also help define what the department needs to do to better serve them. She invites anyone – artist or audience – to call, send an email, and set up a time to sit down and chat.  Her current priorities are to offer “greater accessibility and relevance to artists and the community, to create an exciting space where artists can collaborate and where we can engage in important conversations with the community, and to be known as innovative.”

Like former New York Mayor Koch, she wants to ask you, “How are we doing?”

Only Light, a collaboration between the Office of Multicultural Affairs and Utah’s Division of Arts & Museums is on exhibit at Salt Lake City’s Rio Gallery through February 14.