Meaning to the Abstract, Beauty to the Literal: The Life and Art of John Hughes 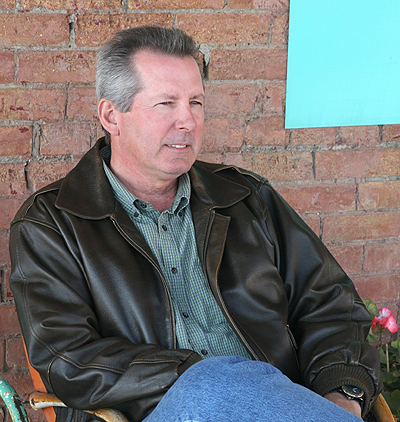 JohWhen I sat down to interview John Hughes recently, I didn’t know much about him. I’d been asked to write an artists profile; to highlight his work as an artist and a teacher. His warmth and kindness were evident from our introduction and by the time our midday October interview was finished, I was a fan.

Hughes, who teaches painting classes at Salt Lake Community College and sells his work in galleries in Utah and Wyoming, has been painting since he was twelve years old. He used to watch how-to shows on television and remembers John Naggie’s drawing lessons. His mother paid close attention to his childhood tendencies, and drawing was a favorite pastime. Encouraging his natural abilities, she gave him a John Naggie Painting Set for Christmas; the next year it was an oil painting set accompanied by three Walter Foster how-to books. These proved to be a great springboard for his life-long quest of artistic expression.

Like most teenagers attempting to eek out a place in society, Hughes’ interests shifted and he eventually became frustrated with painting before starting high school. It was Ossining, New York in the 1960’s. He had spent a lot of time down on the Croton River painting en plein air, but lacked the type of technical instruction for which he yearned. He continued art classes in high school but ended up majoring in Special Education in college. During his college years he began to cultivate his interest in painting again and usually was able to finish at least one large acrylic painting each summer. 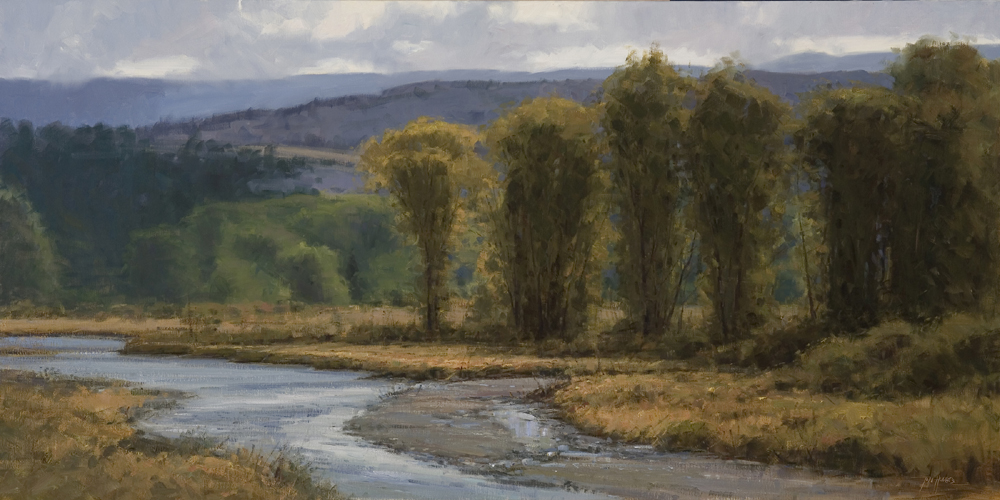 Then, in 1983, Hughes found himself strolling down a street past an Aaron Brother’s Art store. It was the whiff of linseed oil that drew him through the doors; like stumbling into a long-lost love. The mix of linseed oil and turpentine that wafted through the store, beckoned him back, drew him to the tubes of color like a pied piper of art. That was it for John. Painting with oils had found him again and he wasn’t letting go this time.

Of course there are always complications. Hughes had married a few years earlier and now had two children. The garage called to him nightly, inviting him to fulfill his creative angst. He began spending several nights a week in his makeshift studio and never dreamed that this could be a concern to his wife Teresa. One day, almost playfully he asked her if the time he spent in the studio ever made her jealous and, to his surprise, she replied that at times it did. It wasn’t a large problem, but just enough to make him think that he might not be spending enough time with the family. But, one day, after selling his first painting in a local gallery, Teresa said “Don’t you have something to do in the garage!” They both laughed and it was the beginning of a great career in art. 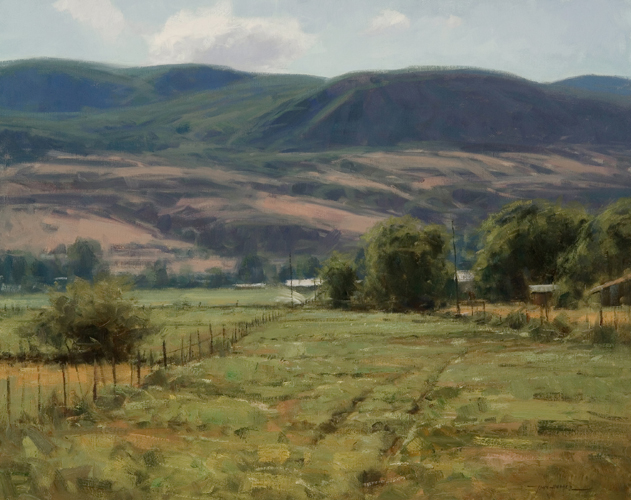 In those early days, the car had become a familiar place for Hughes. He found that his own innate shyness prevented him from leaving the comfort of a Naugahyde safety net to stand in the open and paint. His back and shoulders would ache from painting a canvas in the passenger seat while he stayed seated behind the wheel. It took some time for him to develop the confidence to get out of the car with his easel and paint in the open air. Over time, Hughes’ reservations eventually subsided and his fear of painting en plein airdwindled away.

At the time, Hughes was working for Ventura College in California, instructing adults with disabilities. Hughes ended up taking a six-year hiatus from teaching when he and his wife took on the management of a ski lodge in Big Bear California that catered to weekend guests. The job left Hughes plenty of time for painting. The location was ideal and the environment inspiring. After joining the Bear Valley Art Association, Hughes was able to build relationships with other artists and establish his professionalism. That first year he won the Big Bear Artist of the Year Award, an honor he still cherishes today. 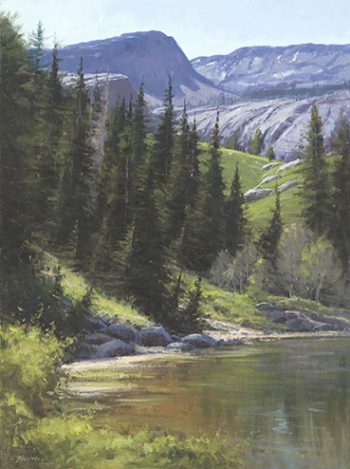 Hughes and his family moved to Utah in 1991. He re-accredited as a teacher and started teaching special education in a classroom of students with intellectual disabilities at Bennion Junior High. He also teaches art for Salt Lake Community College’s Continuing Education program and continues to pursue both occupations today.

Over the years, Hughes has been able to gain real insights into teaching adult students as a result of working with teens with disabilities. He even uses similar teaching tools in both settings. In special education, a teacher is required to break everything down into short tasks or bits of information. If a primary idea is broken up, it allows students to evaluate each individual element of a larger concept. Hughes tries to isolate things for his adult students. Like breaking down painting into five essential focuses; drawing, color, values, edges and texture. Beginning a painting is less about the subject and more about its colors, values, shapes, etc. After establishing those elements, then the piece can be adjusted to become the subject of focus.

In art the literal gives meaning to the abstract, but the abstract gives beauty to the literal; together the two transcend what could not be accomplished alone. 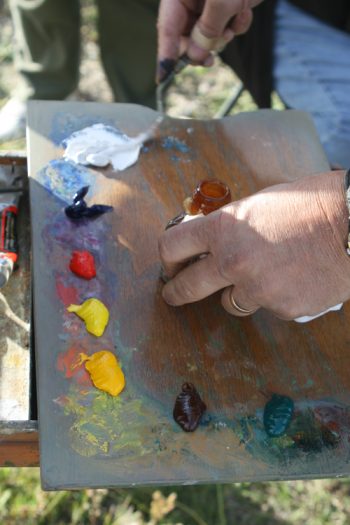 Once Hughes’ students are in the field, painting en plein air, he is able to analyze their individual needs. The biggest problem with adults, according to Hughes, is that they carry a set of preconceived ideas about painting and art in general. Adults hold a fear of failure that is not usually fully developed in the youths he teaches. Working with adults is not only dealing with nature at a given moment, but also dealing with individual psychologies and, occasional quirks that make the learning process difficult. An example of this would be the student who won’t allow a teacher to take hold of his or her brush to demonstrate a technique directly on the student’s canvas. This always puzzles Hughes, who feels that this type of fearfulness only hinders the progression of the student. It’s difficult for a teacher to verbally explain a painting principle, which is more easily demonstrated visually, through example. Hughes always tells his students not to let their paintings become so precious that they are afraid to make changes. The class setting is the perfect time to experiment and loosen up and no work should be regarded as sacred. A field study is just that, a study. Plein air is about reporting from the field. If the end result is fantastic it’s an added bonus. If not, the piece becomes a learning experience, something to examine. 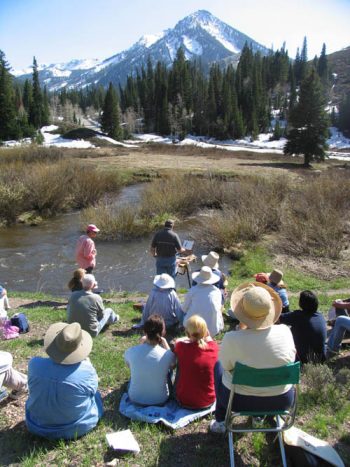 Hughes does this himself on a personal level by keeping many of his past field studies in his studio. He literally has produced hundreds of location paintings and keeps many of these works to pinpoint key steps in his personal progress. With each painting he remembers where he was and what the air and environment felt like. They are each points in his own progress as an artist and some represent pivotal steps in his journey. As he explains, “learning doesn’t just take place in schools.”

One of Hughes’ students and his classroom assistant, Laurie Warner, describes the artist as a calming presence in the field. She appreciates that he is a good teacher and that he doesn’t overload students with too much information at once when they are in the field — a place where they are already being bombarded with stimuli. He encourages students to study values wherever they might be, whether at a stoplight or accomplishing daily chores. The phrase Hughes uses that his students love most is “come away with a sense of place, painting is really more about a feeling than a visual actuality.”

Hughes’ students from Salt Lake Community College rendezvous all over the Salt Lake Valley, and beyond, in order to paint. Finding a plein air spot for twelve or more adults is far more difficult than for an individual. Physical capabilities must be taken into account; bathrooms, parking availability, comfort and of course a location must have an artistically compelling view. Every group is different based on age, experience, and physical prowess. 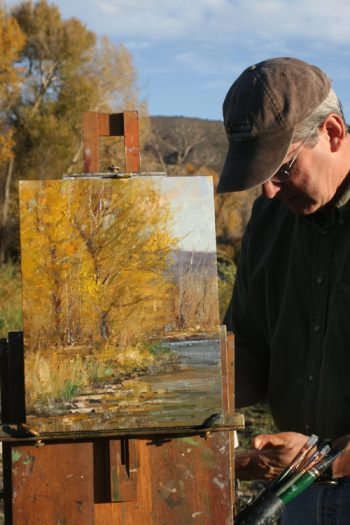 Hughes with a finished work after his class in Wanship.

Most of Hughes’ paintings are landscapes, although he does produce the periodic cityscape or still life. His large works are created in the studio, but his preference is plein air. Despite his passion for fly-fishing, guitar and hiking, once he’s out of doors and milling around in the wild, he finds it difficult to do anything besides paint. If the light is right and the landscape is appealing, Hughes will venture into an oil wilderness for as long as the environment allows. Painting usually wins out.

Hughes finds that his career as a special education teacher helps to balance him and his life. He worries that if he only taught painting, he would become “burned out” and give up creation of his own work. Teaching special education has proved to be a complement to his desires as an artist and as a human being. Painting renews him. And, with summers off, he finds he has all the time he needs to pursue his greatest passion without becoming overindulgent.

Crediting his wife, Teresa, with her support and patience over the years, Hughes admits it would all be futile without her. He has carefully learned to balance his career as a teacher and as an artist; but has also included family in that balance. With four children, he has had to cope with their growing pains, their developments, and their interest or disinterest in art.

Today, you might still find Hughes painting in his car. Only now it’s due to inclement weather and cold, rather than timidity. His friend, Doug Braithwaite, gave him an idea that saves his back and shoulders from the agony of twisting his frame towards the passenger side. By rigging a wire on the back of a special masonite easel, John is able to hang his work-in-progress on the steering wheel and paint straight on, comfortably. He admits that this only works for fairly small pieces, but it saves a plein air painter from exposure to the most hostile elements. 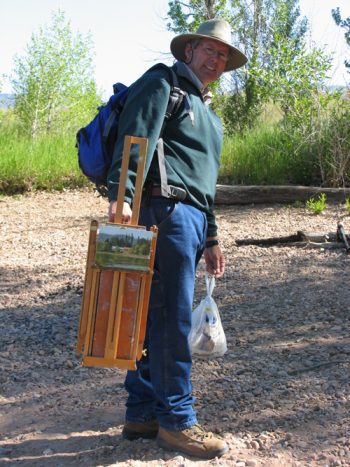 Hughes painting in the field in Hunstville.

John Hughes is an absolute pleasure. I wouldn’t mind packing an easel and some oil paints into the wilderness in order to produce a quick study painting under his tutelage. To begin with the chaos of color and shape and end with a depiction of the natural world in which I am painting would be a truly satisfying way to spend any afternoon. Perhaps a walk past Utrecht Art Supply will draw me into a life of painting . . . . But, then again, I’m not a painter like John Hughes. As they say in the theatre, he’s got “The Bug.”