I entered Phillips Gallery last week with a little shiver of anticipation: there’s a solo show by Maureen O’Hara Ure, one of the most original and interesting artists working in Utah today. And I was going to get to talk to her about it.

Art, for O’Hara Ure, “is more malleable than language.” She does do some writing but likes “the privacy of visual art because people either don’t get it or get it wrong. I can say in a painting what … I’m not ready to say out loud and clearly in sentences.”

Elsewhere, running until April 8, is a challenging, witty, exhilarating exhibition whose works can (but really should not) be viewed online. The imaginative creatures and birds featured in most of the paintings seem to breathe when you are with them, taking on a life of their own. O’Hara Ure says that she is willing to be misinterpreted: whether from someone talking about “those cute little animals” or finding a piece, “so dark it creeps me out.” But the scenic “Memento,“ featured on the gallery announcement card, is illustrative of what she truly does: “It is influenced by a Roman era fresco a hundred years before Pompeii,” explains the artist. 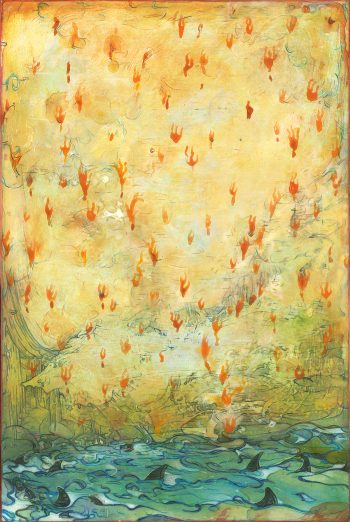 Elsewhere picks up where O’Hara Ure’s 2019 show at Phillips left off. Some of the influences from art history and the ways she manipulates surfaces will be recognized by those familiar with her work. For example, she does a lot of sanding on her paintings on sturdy panel, sometimes revising over years. Nothing is considered finished until it is sold. “I slowly build up an image, obsessively laying down marks in thin, sanded layers of paint, ink, and pencil. When a work returns to my studio from a show, I set it aside, but eventually I may begin to tinker with the piece, first sanding out, painting over just a section. Often as not, I keep going and start all over, erasing any memory I have of the image.“

“Elsewhere,” the titular (and stellar) 24 x 86-inch mural, was first worked on in 2007 but fell off the guest-room wall last year, “signaling the need for further work.” (The lambs in that piece, shown in detail on the gallery website, come from a mosaic in Ravenna, Italy.) “My process is as reductive as it is additive. So, I’m taking off as much as I’m putting on,” she says. (Her layers also show up well on “Trouble in Mind” and “Surrender” — the fetching painting of a standing bear that she describes as a self-portrait, as are the numerous other bear images in this exhibit. The artist identifies with the whale in “In Plain Sight” as self-portraiture, too.) 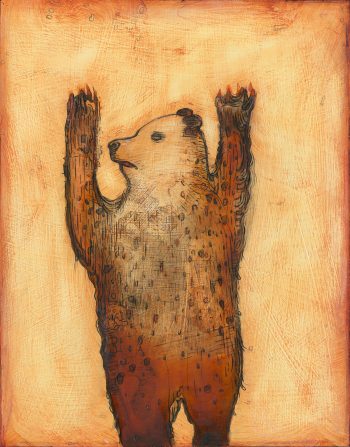 “These paintings, all developed within the past two years, represent my attempt to make sense of — to give some shape to — these new and very confusing times,” she writes. For a couple of decades, all of O’Hara Ure’s major projects began with travel (restricted during the pandemic era) “with my drawing in museums and at historical sites overseas. In each case, my travel sketchbooks focused on pre-Renaissance art and architecture. I returned to the studio and set about using the raw ideas in the sketchbooks to begin developing new work, feeling free to take liberties with the historical material I collected,” she told me a few years ago.

In most instances, O’Hara Ure now barely recalls the precise images she started with, though she usually seems to know their source. She says that “Inside, Looking Outside” is “almost a Covid piece — I worked until the last second on it.” She discusses the central lioness, and sources all the dozen or so different birds in the work. With the disturbing “Hurt,” however, where a catlike creature appears to gnaw on its own leg in pouring rain, the artist only recalls the source as “medieval.”

“Trouble in Mind” is described by O’Hara Ure as “a vertical landscape” that was prompted by an old email. Recalling, she says, “all the stuff that had happened [in Salt Lake City]: a windstorm .,, an earthquake and making it all manageable and safe again by making a painting about it.” 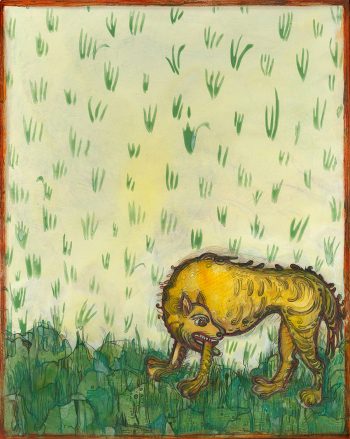 She starts out with layers of gesso and works a lot of things all at once, “so if you go into the studio there will be eight things stretched out — I may touch down on eight or 10 surfaces and most things don’t work and then I put stuff away – I find it again.”

Her studio is at the University of Utah, where O’Hara Ure is a Professor Lecturer. Since 1990, she has taught such courses as Art for First-Year Studio Majors, Drawing I, and Senior Seminar. She has received numerous grants in support of her work.

About “The Art of Conversation,” a delightful work featuring two large birds seeming to chat in a garden setting, though one has its bill in a knot — the artist says her point is that “we need to listen.”

Something I have done avidly now for an hour or so, learning about this richly rewarding show from its creator, keeping the gallery’s Meri De Caria and Hadley Rampton long past closing.