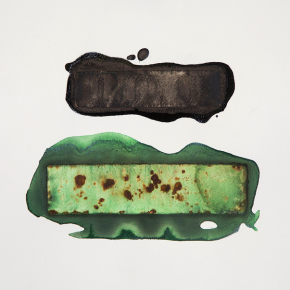 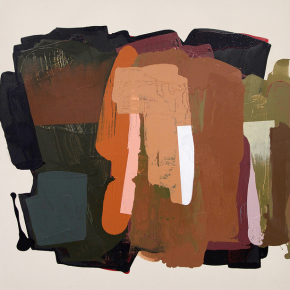 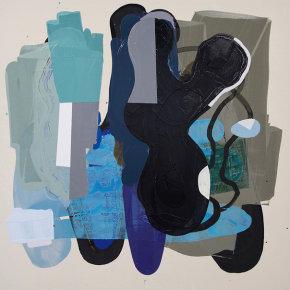 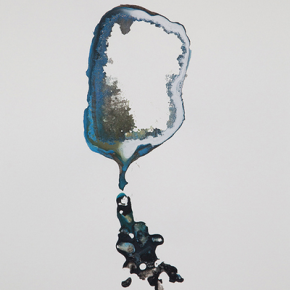 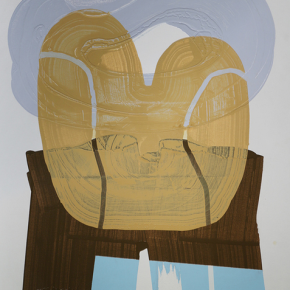 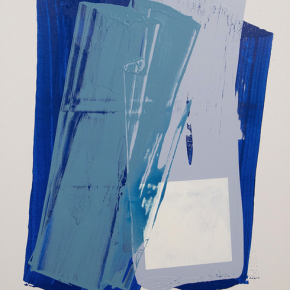 When Dave Malone exhibited at Salt Lake’s Phillips Gallery two years ago, his two-dimensional works were small to midsize, abstract pieces that measured anywhere from a foot square to a standard 26” x 40” sheet of watercolor paper. At his current show, most of the works are twice that size. One barely fit into the gallery.

Awe tends to be a matter of scale, and in our anthropocentric world, man becomes the measure of most things: take the emperor penguin, which though the largest of its species, is still only the size of a grade-schooler, and in our culture remains a cute if intriguing animal; but imagine its ancestors from 37 million years ago— which stood over 6 feet tall—and mating season in Antarctica takes on an entirely new perspective. Something similar happens with Malone’s new works.

The gallery’s south wall features a number of the artist’s mid-size works, 22” x 30” each, hung in a grid. They are similar to the works shown in 2014, watercolors that exploit the medium’s unique properties to form strange combinations of fluid and dry effects, teeming with the sort of granular textures the medium is known for. Smaller works in the same vein are sprinkled throughout the gallery. It’s not that these works are cute, though some are, but executed at the scale where one steps forward to peer at the details of images that resemble odd worlds beneath a microscope, they are intriguing.

Step back, though, to take in the large canvases, which measure anywhere from 40” x 60” to 72” x 120,” and the effect is altogether different. In the art-world kingdom these works are by no means huge (we’re not talking woolly mammoths or giant sloths here), but most exceed the length and breadth of the average patron, a size at which art begins to whelm a viewer. It is an effect intensified by what is going on within the canvases.

The bumping and interlacing forms, dramatic strokes of color and Cubist-inspired designs all resemble what the artist might do with brushes or collage, experimenting on a worktable with a standard sheet of paper. But here these actions are writ large, requiring more shoulder work than wrist work. It’s a scale at which watercolor becomes difficult, and in trading these in for acrylics and enamels, Malone has lost some of the textured, earthy quality of his smaller works; but he compensates for these effects with these big and bold brushstrokes— some of which are wiped thin to create a textured quality of their own— that seem to diminish the viewer and evoke a sense of awe. We have been reduced to the size of a toddler, standing before a world that is perpetually larger than life.