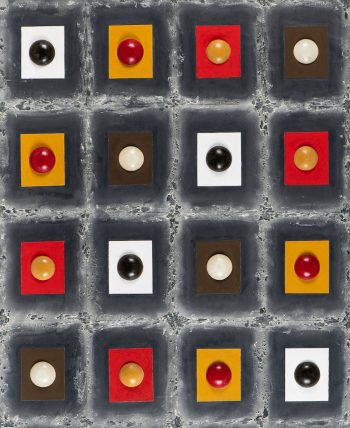 Material Witness is a mid-career retrospective of Jorge Rojas’s abstract work drawing on over fifteen years of experimentation with materials and media. This exhibition presents an overview of 2D and 3D works from 2003 to the present, highlighting two periods of time when he lived in New York City—from 1993-1997 and again from 2002-2009. Importantly, these periods reflect the artist’s engagement with Minimalism, post-Minimalism, Color Field painting, Process Art, and Concrete Art—while infusing these influences with his Mexican roots and understanding of Mesoamerican art, materials, and cosmovision.

Rojas first left his native Mexico with his family when he was six, and his frequent wandering since has shaped his universal visual language as well as his experimental approach to materials and art. The Zen emphasis on purity of form plays a significant role in his work and results in patterns and grids that involve color, geometry, and through repetition generate rhythms, harmonies, and vibrations.

Working fluidly between painting and sculpture, Rojas uses tactile and sensory elements—including wax, layers of paint, sound, and found materials—to deconstruct materiality and discover new meanings. Every-day objects and materials like sandpaper, record sleeves, and sink strainers are transformed into sculptural objects as he uses techniques of assemblage to create new forms. Rojas says, “I begin a piece with a feeling rather than an idea. It is in the act of making that meaning is revealed.”

Jorge Rojas (b. 1968, Cuautla, Morelos, Mexico; lives and works in Salt Lake City, UT) is a multidisciplinary artist, independent curator, and art educator. Rojas studied Art at the University of Utah and at Bellas Artes in San Miguel de Allende, Mexico. His work and curatorial projects have been exhibited nationally and internationally in galleries and museums including White Box, Museo del Barrio, and Queens Museum of Art in New York; New World Museum and Project Row Houses in Houston; Diaspora Vibe Gallery in Miami; MACLA in San Jose; Utah Museum of Fine Arts, Utah Museum of Contemporary Art, and Woodbury Art Museum in Salt Lake City; Ex Convento del Carmen, Guadalajara; and FOFA Gallery at Concordia University, Montreal. His work is included in numerous private and public collections including The Mexican Museum, San Francisco; Museum of Latin American Art, Long Beach; New Jersey State Museum, Trenton; and Salt Lake County. He has received grants and fellowships from National Performance Network, Experimental Television Center, West Chicago City Museum, Vermont Studio Center, Project Row Houses, Salt Lake Arts Council, and the Taft Nicholson Center. Rojas was named one of Utah’s Most Influential Artists in 2019 by Artists of Utah /15 Bytes and his art is included in the 2020 Immigrant Artist Biennial out of NYC. From 2015 to 2021, Rojas served as director of learning and engagement at Utah Museum of Fine Arts, where he oversaw education, community engagement, and adult programming initiatives for the Museum. Rojas is actively involved in the Salt Lake community as an artist, educator, curator, and is a passionate advocate for advancing racial and cultural justice through the arts.