Mary Sinner’s Mementos at A Gallery

In the century and a half since photography rose up to challenge painting as an image source, artists have invented countless strategies for incorporating photos into their working methods. Some use snapshots to replace the traditional sketch book. Others primarily paint things they could never see in person, either because they are remote, rare, no longer exist, or never did. Some painters mimic artifacts of photography: blurring or stopping motion or shattering a subject. At one extreme, the actual photo can be collaged onto a canvas. At the other, far more subtle extreme, the camera can help capture the subjective qualities of personal vision that entrap individual consciousness within so many separate bodies. This is the approach Mary Sinner takes in Memento, more than 30 large and small panels, including some studies of larger works, on view at A Gallery through Sept.11.

Twentieth-century theoreticians, from Saussure down to Sontag, have had much to say about how photographs work, but the content—both of their theories and of the photographs themselves—depend on completely external systems like language and memory. Separation from such texts impoverishes photographs, and the misplaced snapshots collected by Mary Sinner and used as models for her art have lost their identities, probably irreplaceably. Instead of writing an essay in a speculative effort to introduce each of them, she sets herself the task of re-presenting each one in its own, visual language, seeking to turn each into an icon, with all the generic specificity that may achieve. By stripping them of inexplicable, misleading detail, she focuses on the one question she might be able to answer: Why did someone take this picture? A treasured car, a hotel associated with a vacation or a road trip, a trophy, even a favorite toy assume universal significance without quite completely surrendering their individual identities. The final question—how such treasured mementos can come to be lost—remains an unspoken drama, at least elevated in meaning if not answered, because unanswerable. 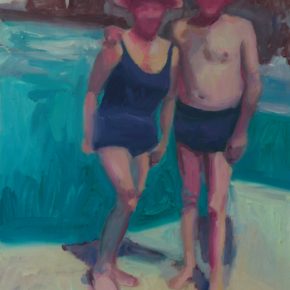 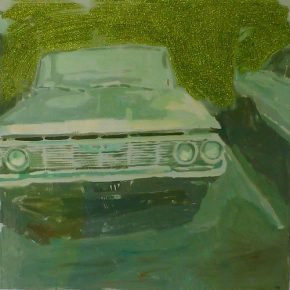 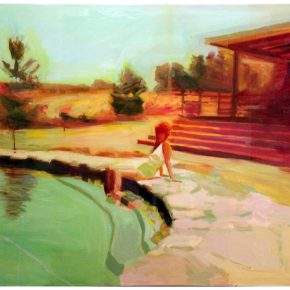 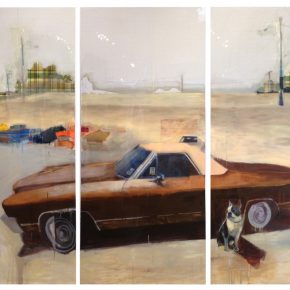 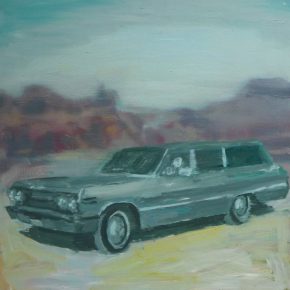 Apparently, Mary Sinner is never content to explore just one direction at a time in her art. When 15 Bytes looked in on her exhibit at Art Access in 2012, she was seen juxtaposing intricate interior scenes, collages built from vintage magazine illustrations, against brush-painted figures of costumed and posed models rendered in flat blocks of primarily undifferentiated color, sometimes nothing more than a silhouette, alternating with areas of arbitrary texture that rarely modeled space. In Memento, she alternates panels surfaced in form-following brushwork with those over which she’s poured a clear resin that leaves them as smooth as glass. This finish, which cannot be seen, let alone appreciated in photos of the works, lends them sharp focus and a crystalline luminosity, the former a paradox given her general disregard for surface detail. It’s not that she lacks verisimilitude; standing before scrubbed-in backgrounds are passages that pop so vividly into space that they can leave a viewer breathless. But clearly, there is much she does not know, feels she must not be seen pretending knowledge of, about what appears in these lost and found images. To paint the faces, for example, as sharply as they no doubt appear in their photos would be to imply she knows their identities in ways she does not. In “August 1975,” such a faceless couple, dressed in hats and bathing suits, stands before a swimming pool, into which their shadows disappear like drowning voyagers. The water, which in the background reflects the building behind them, opens beneath them in the foreground like a chasm, the yawning threat of which belies the cheerful grins that are all that can be seen of their faces. A few body parts—his chest and knees, her leg and upper arm—penetrate the generic data enough to create a psychic, rather an emotional sense of presence sufficient for a feeling of empathy. We know this couple’s experience; we have posed for this picture.

Several quite large triptychs call on all of Sinner’s gifts. “Somewhere in Heaven,” which stands 7 feet tall and 9 long, mixes all her media in a bleak landscape, littered with collaged trash and centered on a brown two-door model and a dog who poses patiently beside it. Exploiting the actual three dimensions made available by the resin glazing, she floats suggestive shapes of plaid fabric over wallpaper in the background, pencils in details that hover between suggestions and gestures, and inserts a photograph in the wind wing that harkens all the way back to Raphael, if not to Giotto. She omits the glaze from “Station Wagon Blur,” but blends the background instead, capturing the panning photographers ability to freeze the moving car while blurring the background. Returning to the resin surface in “Red Ride in the Hood” and “Ford Grille,” glitter floating in the glaze says sun-struck stucco but suggests something more akin to dreams, and perhaps their shortcomings.

If working from these photographs had done nothing more for Sinner than to direct her attention in a direction it might not otherwise have gone and to provide her with subjects that manifestly predate her arrival on the scene, that would be enough. But on the basis of the evidence, they have done something more: something important. By engaging her in a visual dialogue in which tropes in one medium, like soft focus in a photo, are matched with techniques native to paint, rather than just mimicked in oil, and native techniques like drawing and collage replace their analogues in silver emulsion and chemical dyes, she enriches the understanding of both techniques and calls attention to the degree to which images try and fail, or try and succeed in replacing human vision, which in its own way is already a compromise with the world out there, but which is also, for well over a million years, our primary entry point to reality.

You can see more of the artist’s work at her website: http://marysinner.blogspot.com/

Tagged as: "A" Gallery, Mary Sinner