Martin Blundell’s Big Themes, Big Ideas Were Worth the Wait 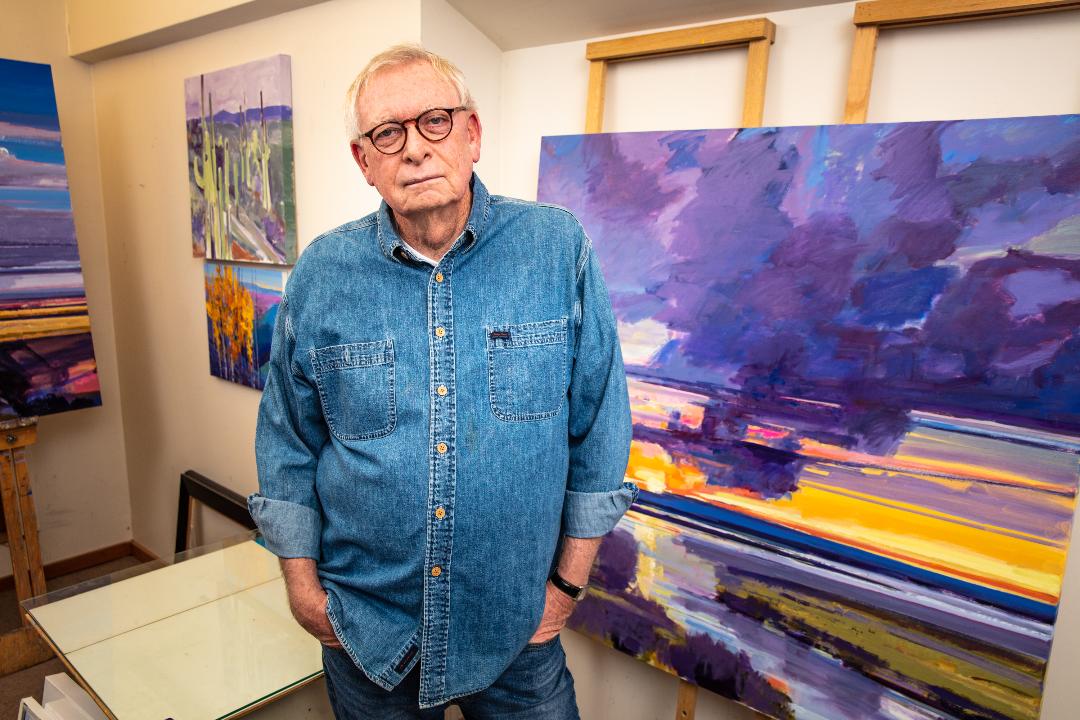 What silent desert landscapes and mirific skyscapes have we missed in the years Martin Blundell spent at his business — at work in the real world — while his artwork lay fallow?

Martin Blundell is a tall, quiet man who can please a small crowd with a deep, baritone belly-laugh and, at the right moment in a good joke, a well-placed pun, or even —among close male friends— a slightly scurrilous and scatological story.

In middle school he was almost six feet tall, and thin; but mature and temperamentally stable.  He seemed to have had early growth spurts, physically and emotionally. While he was athletic, he by-passed the need for attention and the narcissist’s adrenaline rush of high school team sports. He preferred more solitary athletics like golf and tennis, when he wasn’t home listening to Dave Brubek, Bob Dylan and doing his homework. A good student and a good boy. He was on the yearbook staff of Viewmont High School and in his senior year was the school’s Sterling Scholar for Art. 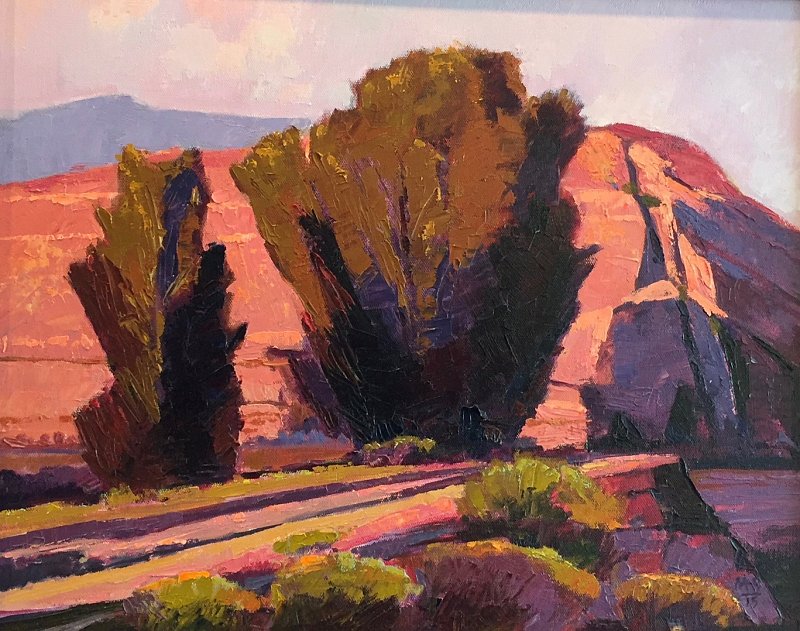 After high school, he chose to enter the existentially important lottery called an LDS Mission and was assigned 22 months in South Korea, preceded by two months in Hawaii learning Korean. A successful mission behind him and in his early 20s, Blundell married his high school girlfriend and moved to Salt Lake City’s Capitol Hill area. The family soon expanded with the birth of a son (who would die of childhood leukemia at about five years of age). Blundell studied art at the University of Utah, but also had to feed his family and, still in his 20s, was called to be the bishop of his LDS ward. With more babies, and church duties and mouths to feed, Marty became an owner in Screenprint Design, Inc. (SDI).  And so it was for almost 40 years, painting and sketching and reading and thinking about art was something to do during his off hours from work.

Four years ago the business sold and Blundell unleashed his creative Kraken. We are just now getting glimpses of the creative impulses and craftsmanship of a gifted colorist, who calls his style contemporary realism. 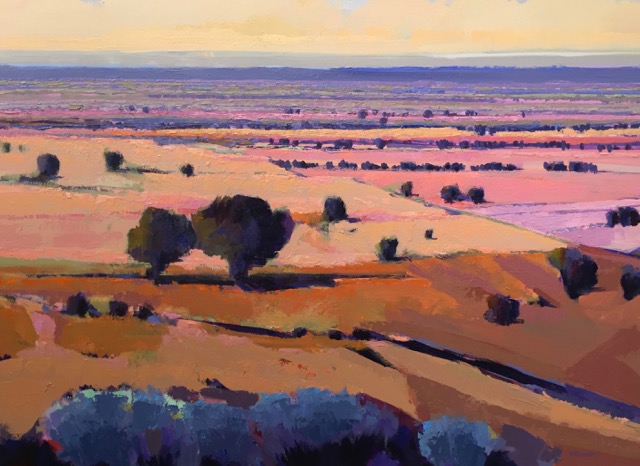 “Above the Valley Floor”

Perhaps his travels in the high desert valleys of the intermountain west through the years of business — meeting customers and wearers of SDI clothing — informed his eyes and hands and fingers and brain, and those perceptible and imperceptible forces — combined with his natural and sensitive self-reflection — all help him now create color with oil and on the virgin canvas-fabric planes he buys from Petersen Art Center in Sugar House.

Blundell starts with a road trip that is sometimes created by a family or business matter, or often just the voices whispering in his head, “Go this way.”  On the road, a view or impulse may stop him and the panoramas of the landscape draw him to stop and look outward, then inward.  Next, a Canon SX camera or a smart phone with a camera captures the view from various angles. When in the studio, Blundell approaches the canvas with the photos and a preliminary sketch appears and the creative duel between canvas and artist begins. 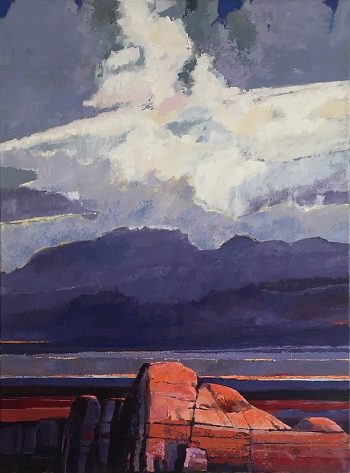 Neuroscience research suggests our neural networks are rhizomatic and memories are not stored complete in some section of our brain waiting for us to call up the complete file like we would select a DVD from the shelf of the library. Rather, because our senses (mostly sight — but also auditory, olfactory, touch, taste, presentiments of spatial orientation, etc.) are so massive they overwhelm us. Hence our brains are equipped with gates and filters that prioritize and direct the incoming data. In its wisdom, the neural system chooses what is not necessary for immediate and life preserving action and divides “less life critical” data into chunks and sends them to various and different sections of the brain. Our experiences and memories are no longer of one kind, but are now fragmented and stored and rhizome-like connected in different parts and hemispheres of the brain. When we want to recall something the theory suggests our neural network system retrieves these stored fragments and then brings them back, but re-assembled. Hence, each memory of a moment is a “memory of a memory,” new and different.

When Blundell sits alone in his studio with the photographs and his memories of the memories, the brain reassembles the experiences, but these experiences now come back via another network and carry with them the new experiences, impressions, images since he first pulled off the road. Marty then engages in the creative duel between canvas and artist when the first marks are made.  He will continue his work after the magic of mixing the oil-based paints while referring to the photographs and his memories of memories, but at a moment based on mood or intuition or the whispers from his muse or chance, he will abandon the photographs, and a new connection is made with the canvas as the work with oil and brush goes in a new direction. A third movement and unfolding or chance happens as brushes are abandoned and Marty picks up a pallet knife,  which becomes the extension of his hands, arms, eyes, images, memory and creativity. 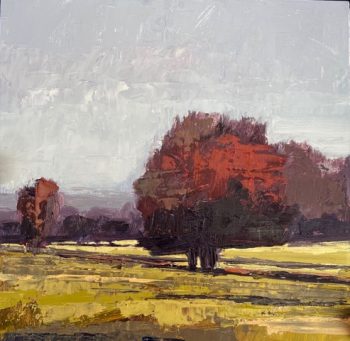 Consider Blundell’s “Red Tree.” The bold red and browns are applied by the pallet knives after the juniper trees have been painted and Blundell combines chance and an informed and creative intuition with technique and anticipation to make this image magical.

Most of Blundells’ works are landscapes with big themes and big images: big skies, big clouds, big storms, expansive valley floors, massive rock faces, deep and steep canyons — all iconic of the high desert canyons and valleys of the Colorado Plateau of southern Utah and northern Arizona. His “Above the Valley,” a 36 x 48 in. oil on canvas of the Grand Staircase National Park near Escalante, UT, has these notes: “One of the longest breathtaking views of slickrock, juniper, cedar and pinyon.”

Blundell nicely swerves the intensities of his landscapes from stones to skies and back. Colors explode from the canyon walls and atmosphere; and colors vibrate with the juxtaposition of violets complimenting and  complemented with yellows and oranges. If Bob Dylan were to write a song about Blundell, he might title it: “Bandana in Violets and Yellow.”

Visitors to Blundell’s landscape can see the twins of Form and Color at work. In “High Above the Valley” there are triangles and parallelograms — Platonic, universal, transcendent “forms” —  in brown and pink and light purple; and in tension with the eternal forms is the chaos of the storm clouds above. Few can match Blundell’s clouds for subtle, though in-your-face impact. Look at a painting like “Thunder Cloud Rising,” a 40 x 30 in. oil on canvas — understated forms in the sere sandstone are pulled into view by the towering clouds that are emergent and unfolding, complex and chaotic. 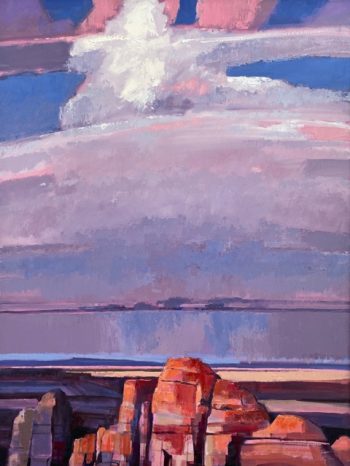 Blundell’s paintings can be viewed as almost origami-like, where the landscapes and canyons and mesas unfold and refold, emerge and submerge and with no difference between the inside and the outside, a Joycean “chaosmos.”

One wonders whether a younger Blundell would have achieved this level of solid skill and towering temperament years earlier and today we would be looking at wholly different Blundells.  Yeats posits that we will never know, that we cannot know what goes on in any person’s mind, what he calls the “eternal virginity of the soul;” but we are glad Blundell is now painting even after such a late start.

Martin Blundell’s works are featured in Celebration of Fine Art, Scottsdale, AZ, Jan. 16 to the end of March. His work also appears in the Sears Invitational, St. George, Feb. 18 – April 3.  You can follow him at martinblundell.com and  instagram.com/martinblundellfineart.