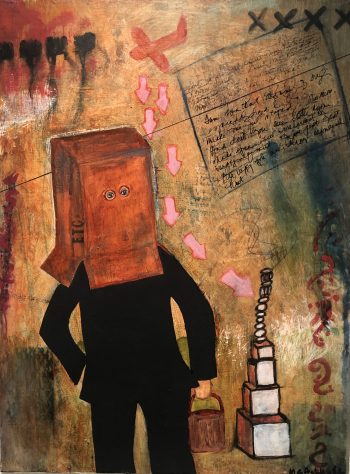 “I want to make the art that ends up in the history books. “With that remark, a local artist — who had gone to the Coast to polish some skills, only to return when it turned out that impressing the Big Pond is harder than it had looked from the smaller pond — launched into a career of ever-greater disappointments. Meanwhile, many of the locals who remained here had found their way into one or another community of Utah artists, where they worked for themselves, as they should, but also for the joy of sharing with each other. And so we come to see galleries and related spaces full of the most delightful art — art that may never be in the history books, but not for lack of character or quality — rather, for want of unhealthy ambition.

Marti Grace Ashby shares a gallery at Bountiful Davis Art Center with her fellow artist, Kristina Lenzi. 15 Bytes looked at Lenzi’s The Self-Important Artist already, and found the two bodies of work call attention to each other’s concerns even as their approaches differ. Lenzi is well known to 15 Bytes and her self-portraits share a specific approach, which may have diluted appreciation of Ashby’s more polymorphous portraits on first encounter. On the second visit, however, there was no question how much Ashby’s people felt like old friends, the pleasure of the encounter rising to delights unanticipated while out of touch. Ashby has written that her self-portraits don’t look all that much like her, which is her right even as she moves between different times in her life and changing self-images. That should also mean the audience is not limited to seeing these as portraits of her. This or that Marti Grace Ashby could be your friend. Or you. 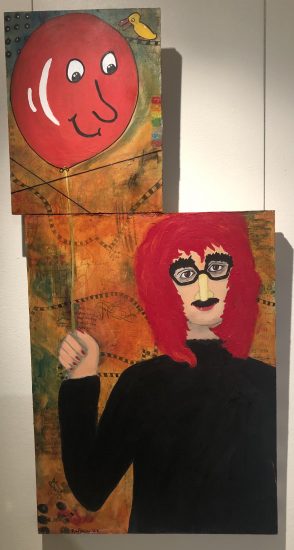 Setting the pace, “Remembering Sam” encapsulates an entire friendship into two panels, the second patched onto the first in order to enclose Sam’s fire-engine red balloon, which sports a playful face. On the other end of the balloon string, Sam rocks an equally red head of hair and what is almost certainly a disguise: a mask that has come to be known as “Groucho Marx glasses.” The miss-match between the mask’s black eyebrows and mustache, and the red lipstick peeking out from behind the latter, assisted by Sam’s somber expression, sets off a warning bell in the viewer’s mind. A richly textured array of patterned paths, color swatches, correspondence, scribbles, and even musical notes quickly raises the tension. Who is (was?) Sam and why the remembrance — or impersonation? This initially goofy portrait raises an almost unbearable ache in the viewer — not unlike Lenzi’s observation that comedy in art can lead to serious reflection. This is a good time to recall that the true subject of a self-portrait is often an internal state or event, something external in the ordinary sense, even as it has been internalized. Ashby mixes up who and what she wants us to see: something she labels “magical realism in both thought and execution.”

As happened with “Sam,” Ashby has a thing — and a knack — for filling the ground or open space against which her self-portraits stand with a universe of reference that feels anything but trivial. Some of these symbolic ciphers are icons, like the yellow duck who appears on the subject’s shoulder in “My Life as a Bunny,” but in “Tangled Up In Blooms” has scaled a ladder to the rooftop of a house-shaped clock. 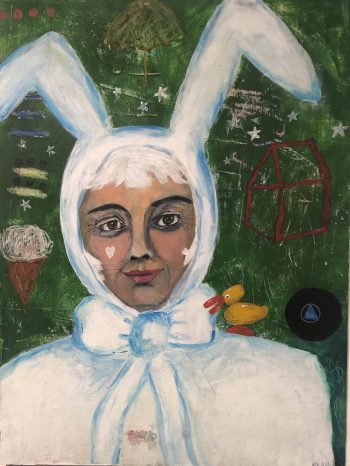 “My Life as a Bunny”

That house, an umbrella, a self-defeating hourglass with no bottom so the sand just pours through, and too many plangent memories to count, each a story in itself that seems at least as compelling as the main feature, fill the space with invention that implies how much more there is to the story than we can ever know. Ashby’s choice to include large bites of nature, but nature of a most domestic kind, like garden flowers and pet-like animals, creates a third layer of being adjacent to the subjects, but thematically related to the symbolic environments. In other words, Marti Grace Ashby manages to fill her painting with the most sophisticated matter without destroying the accessibility and appeal of her initial low-pressure imagery. A viewer fortunate enough to regularly be exposed to one of these playfully serious portraits could expect to discover something new and refreshing fairly often.