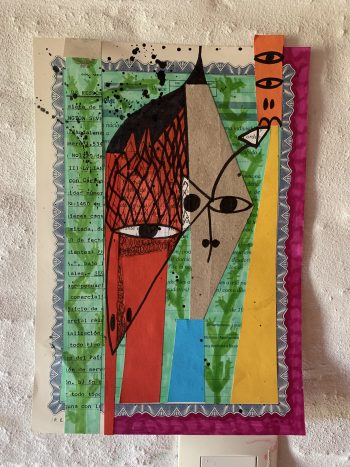 Office Space is excited to exhibit the first part of an epic series of experimental and playful works on paper by Uruguayan artist Marisa Bernotti. In her debut solo show here inside the extensive gallery area at the Chettinad House location, the artist probes the anthropological complexity of the office cubicle lifestyle against the background of subversive, illustrative figuration that deconstructs the spiritual emptiness of financial data and visual accounting centered within leftover scraps. The element of play contrasted with neo-liberal concepts of work add to the overall tension bubbling underneath the seemingly happy-go-lucky approach of the artist’s styles, media, and compositions within these multiple series as a deadpan satire of commercial graphic design tropes. Much of the draftsmanship and mixed media have overtones from a hybrid of Dieter Roth and Paul Klee. The gallery will be featuring the second portion of the show during early 2022.

Marisa Bernotti’s use of materials inspired by an office workspace brings together paperwork such as bank notes and statements and office supplies such as markers, pen, ink, (even the occasional paper clip or two) together into beautiful works of art. The documents bring the viewer in closer with their bright colors and layering of marker, pen, and collage work with different types of papers. The large collage papers float off the wall, making it feel loose. The arrangement of the work and show has a DIY feel, with things placed on the wall in grids. The larger collages crested with multiple Bank papers adhered together hang unevenly off the wall, much like sticky notes, photos, and other documents hang loosely in office cubicles.

The works use anthropomorphic figures, that are animalistic and humanistic reference a Mesoamerican influence of symbology and representation, mixed with today’s symbology though the use of numbers and business transactions, along with modern written language.  The Guaraní people lived in a large region including Uruguay and the country’s name comes from their language Guaraní and means “Río de los pájaros pintados’’  or  “river of painted birds”.  Bernottis work is inspired by a rich amount of history from indeigenous peoples and culture, to today’s issues with societies and capitalism. The art uses colors that are bright and unique helping to bring in the colors of the land and region of South America, the tones are very uniquely created to catch the eye and the beauty of the landscape Bernotti is influenced by.

La Oficina comprises a multitude of representations from the past and the present, and literally combines them through the use of stacking and layering in the collages. Banco 1-6, done in marker, allows for the viewer to experience the history and symbolism of animal like figures such as snakes, birds, lizards, insects, and the like which have an association with the type of climate that South America is known for. These are all drawn over the bank statements which you can see beneath the marker. The production of the artwork fuses today with the past, showing the importance and connection between history and present day. She connects jobs with the past with jobs in the present in a very anthropological way, though the use of plant like representations on the Conforme collages in which leafy green plants, and orange plants rise in a whimsical manner referencing the hunter gatherer societies from the past, while putting those symbols directly on documents that bank workers, accountants and other business people in offices work with. Bernotti shows us a whole human history here.

Bernotti plays with the idea in the Conforme set in which seven paper and marker documents allude to the challenges that today’s world presents to us. What is being covered up by capitalism and politics? In Conforme 5 the words Game Over are printed over top of the document along with geometric style colored boxes. Today money is a language as well, and it speaks, big financial companies are profit makers because they know how to play the game that is capitalism, but for many people capitalism is a losing battle. The amount of people able to play the capitalist game and win, have incredible amounts of money, but the number of people who have done that is very slim, this creates a lot of inequality in the world. The criticism of this system and way of life is challenged by the art and it’s presentation. When societies were most equal was when humans lived as hunter-gatherers, and food and work were shared by everyone in the group. La oficina brings this juxtaposition of past and present in regards to many topics.

Ultimately, Bernotti creates a body of work in which the past and present must face one another. The technique of collaging and layering materials and drawings over documents forces the viewer to confront what is on top before continuing on to the next layer, and in this way, requires thought of the past and the present. Bernotti shows thought symbology that has mesoamerican roots, and indigenous roots from Uruguay how much humanity and our systems of life have changed. La oficina puts viewers into an office workspace that displays the creation of the society we know today, confronting us with these new challenges that we must face together as a complex society in the present.

Marisa Bernotti (1978), Uruguay. Graphic design (1999) and Bachelor ś Degree in Economics (2005). Bernotti is a multi – disciplinary artist. In 2013 the Board of Soriano in Uruguay, granted her public recognition for her fundamental contribution to the development of the land in artistic activity. In the same year, she was selected as an artist of Mercosur for her exhibition “Eyes that speak, mouths that remain silent”, a show for women’s rights. She was a finalist for the Poster of the 19th Montevideo Children’s and Youth Book Fair in 2019. In 2020 she participated in the SVA Residencies in Art Practice. Their work was exhibited in many countries such as Uruguay, Argentina, Italy and the United States. Bernotti bases her work on feelings, the news, the frivolity of the moment, excess, disease and injustice, which she recreates with her own imagination. Her practice asks and imagines what we feel uncertain about. She expresses this with an excess of color and a vivid palette in unimaginable combinations. She works on canvas, papers, books, textile, objects, builds puppets, and does performance. Bernotti is also involved with the I found U global collective of interdisciplinary artists.