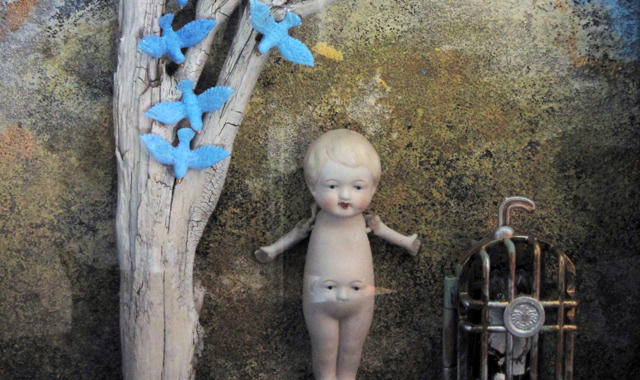 It’s often said that fans confuse the characters in movies with the personalities of the celebrities who play them. Something similar must happen with art and artists. Surely no one was surprised to learn that Picasso, bawdiest of artists, was a shameless womanizer, but how many of Thomas Kinkaid’s admirers were taken aback when the pious painter drank himself into an early grave? One local artist whose work appears, at least initially, completely contrary to her personality is Marcee Blackerby, the impishly playful, demonstrative and delightful woman who appears as a cowgirl in her husband Rick’s imagery, and in her own self-mythologizing as a Harley-riding Hippy Mama, yet whose objets-d’artpositively revel in the macabre.

No chance to once again encounter Blackerby’s evocative and arresting art should be casually missed. It’s not that she rarely shows, or that her work is hard to find. Rather, in spite of the challenge of finding material for her talismans, which partake of collage, mixed-media, and objet trouvé—the big three techniques of watershed movements like Dada and Surrealism—without really belonging in any one of them, she manages to be so prolific, as well as eager to share the discoveries that so clearly delight her, that her exhibitions tend to overwhelm audiences. The viewer unravels a few compound objects, takes in a handful of more straightforward ones, and totters off like that Monty Python character who begs to be excused, moaning “My brain is full.”

No doubt assemblage is the right term for Blackerby’s art, though care must be taken not to confuse it with artworks whose makers merely insert found objects in among new materials. Their goal is nostalgia, a sentiment totally missing from authentic assemblage. Artworks by Ed Kienholtz or Marcee Blackerby don’t just include authentic, surviving cultural wreckage: they exist to reanimate and critique those who made and used those artefacts, were shaped by them in turn, and then passed on, leaving them behind. Like those dancing skeletons that entertained and disconcerted medieval audiences, Blackerby’s ultimate subject is mortality, and the role it should play in everyday consciousness. Less heavy-handed than the skeleton with the motto, “As I am now, so you will be”—in fact, a lot less heavy-handed, more captivating instead—her art employs a seemingly endless supply of worn and damaged goods to stand in for ourselves. Paused on the downward spiral from pristine manufacture to inevitable annihilation, they create a resonance in us: an empathetic sense that we, too, are still interesting, still have some potential.

There are no doubt those in her audience who will argue that we already think enough about our mortality. Consider the current rage for post-apocalyptic fables, for vampires and zombies. Yet a few moments reflection will show that, while the anxieties that underlie these narratives has much to do with our fear and knowledge of death’s certainty, in fact their purpose is to allay those feelings and weaken that knowledge. The ‘Undead’ that used to frighten us do so no longer. In fact, with their warm, sparkling skin and irresistible romantic virtues, they argue for the same immortality that religion promises, but in a dare-we-say more attractive version than the one that has the faithful spending eternity in church. And those stories of how the world almost ends? Isn’t their point that we, the audience, and the protagonists we identify with, all survive into the new millennium?  Zadie Smith writes: “The post-apocalyptic scenario—the future in which everyone’s a corpse (except you)—must  be, at this point, one of the most thoroughly imagined fictions of the age. » But that’s entertainment, diversion, distraction. Marcee Blackerby, like Smith herself, seeks something more genuine.

To a humanist, art is here to help, even if that help entails some medicinal discomfort. It’s impossible to live life aware, at every moment, that I must one day die. My own death is now, and will always be, inconceivable to me. An art that maneuvers me closer to the facts, only to disappear like the bogey man, or that frightens me like a jack-in-the-box, only to let me off the hook, that art takes my time and money under false pretenses. For an alternative, for an image that can be borne, and that, like a good joke, makes the truth both more present and more palatable, I recommend those courageous artists who see the future not in some imaginary departure, but reliably predicted by past and present reality.