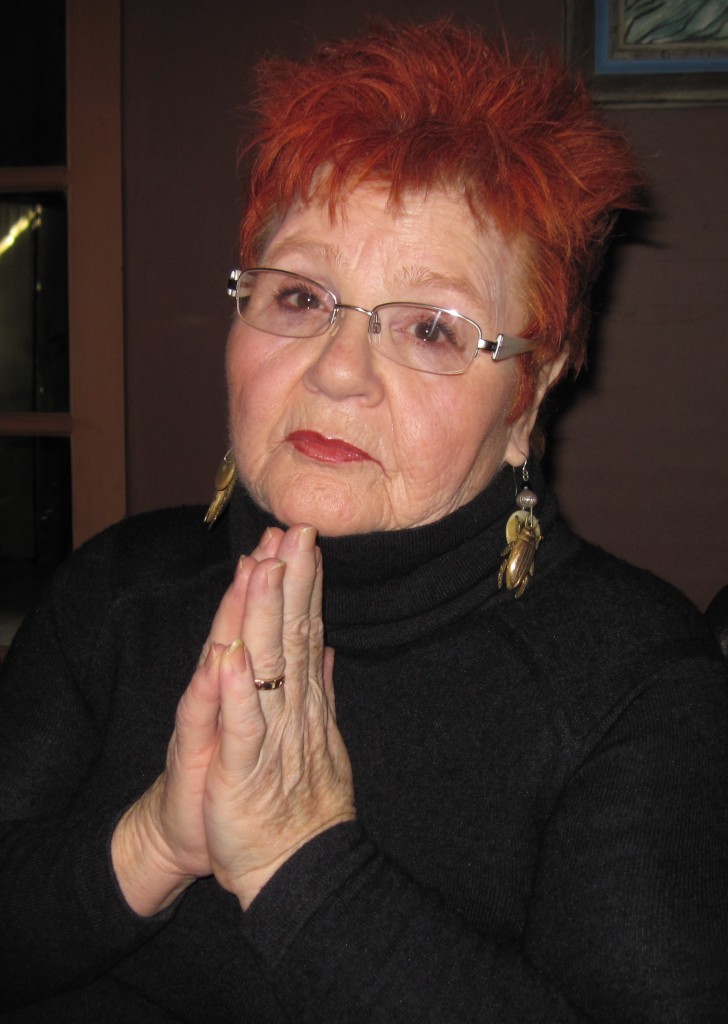 “The strange and disconnected are the stuff of my creations.”
– Marcee Blackerby

Like Saint-Exupery’s The Little Prince, Salt Lake City author and artist Marcee Blackerby, born in Castle Dale 75 years ago, followed her star and left this planet around 1:15 a.m. on Dec. 30, 2019. She simply didn’t wake from her dreams following a lengthy battle with a blood infection. A celebration of her life is planned in February with details to appear on Blackerby’s Facebook page.

Marcee had to leave behind people she cherished: her husband, artist Ric Blackerby; two daughters, Heidi and Lisa; several siblings; grandchildren and great-grandchildren; a wide variety of friends and colleagues. 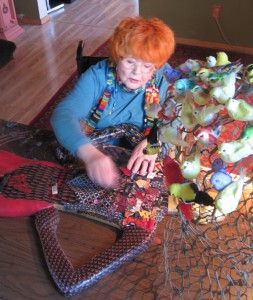 Blackerby at work in her wheelchair, 2015.

If you didn’t know her personally (and she was widely known and loved), you’ve perhaps seen her about town — in a gallery, a grocery or thrift store, a shopping mall (she did love to shop — and to read, and watch PBS, and view foreign films, or documentaries on any subject) — a tiny, artfully dressed “natural” redhead wearing distinctive glasses and ensconced in a big, black wheelchair.

Blackerby was adamant about the rights of the disabled. One Christmas season maybe 18 years ago, she sat patiently enough on the lower level of Crossroads Mall while shoppers with armfuls of packages crowded repeatedly into the glass elevator going UP.  After 15 minutes or so, she pronounced, loudly: “People with LEGS should TAKE the STAIRS!” The elevator rapidly emptied of startled, pink-faced passengers and, as the buzzer went off madly, Marcee wheeled on regally, nodded her assent to board toward mothers with strollers, and the doors closed gently on those who truly belonged on the assistive device.  And in 2014, she co-curated, with her husband, what she called Freak Show at Art Access (the board, to her chagrin, changed the title to Differences – A Dialogue). Marcee showed a small box of “Mixed Freaks” containing conjoined twins, a turtle boy, a girl with four arms, and others along with a handy mirror so viewers could place themselves in the cast of characters. She was an excellent instructor in the art of disability. 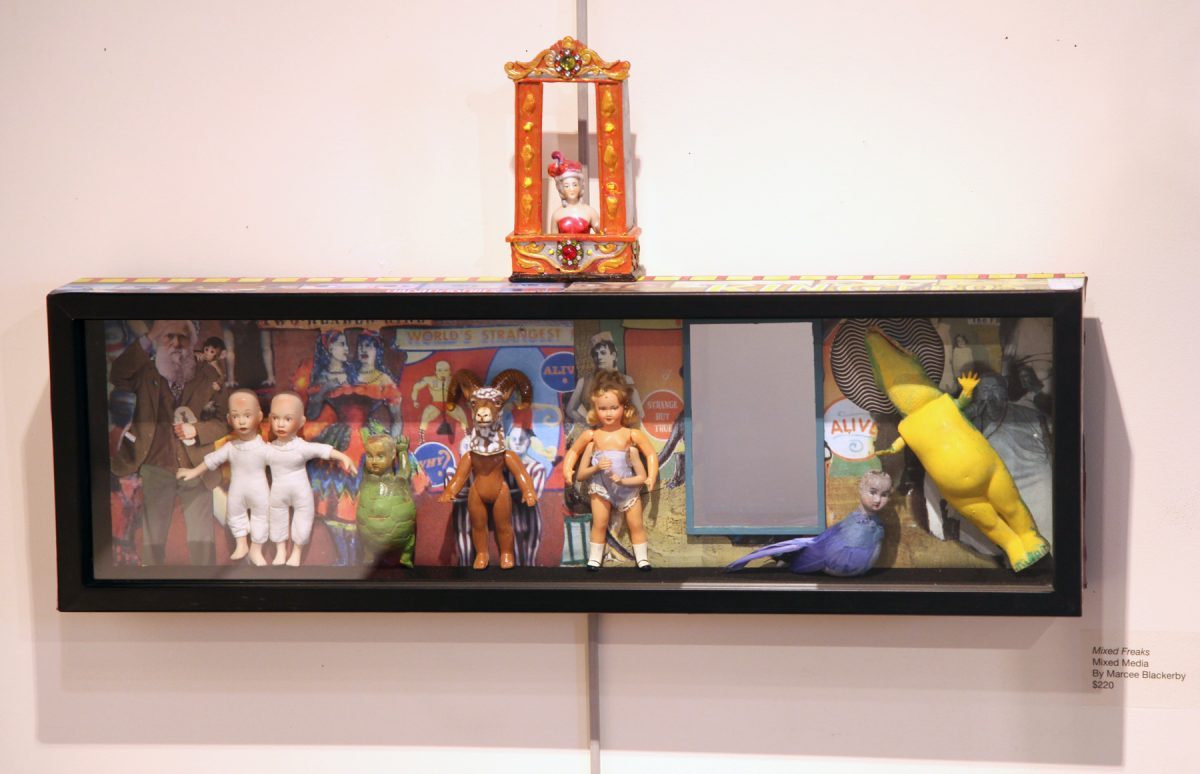 Sheryl Gillilan, executive director of the Holladay Arts Council who served in the same capacity at Art Access when Marcee was on the board there, recalls Blackerby as “a no-nonsense person who called it like she saw it. She was a vital component of the Art Access board because she openly talked about her use of a wheelchair and how hard it was to get around sometimes. She was very clear that she had solved her mobility issue with the chair, but the rest of the world was really good at throwing obstacles in her way like curbs, lack of ramps, cramped aisles, paintings hung way above her head, and what have you. She made me and the rest of the board see disability in a whole new light — as a problem that able-bodied people had created.

“She was an amazingly creative artist,” continues Gillilan, “who took other people’s junk and made art out of it — almost as if she were saying, ‘You think this (and I, because of my disability) might be junk, but honey, we’re art!’ With her flaming red unnaturally colored hair and wildly patterned clothes, she shouted her presence and told your fortune on the side. And when she wasn’t doing those things, she sang with Ric [a talented musician and vocalist] or wrote like a fiend about her crazy exploits as a consummate rule breaker, Motorcycle Mama, carnie, and online-certificate preacher. Much to my dismay, the world lost gallons of color and much-needed wackiness when she died,” Gillilan says. 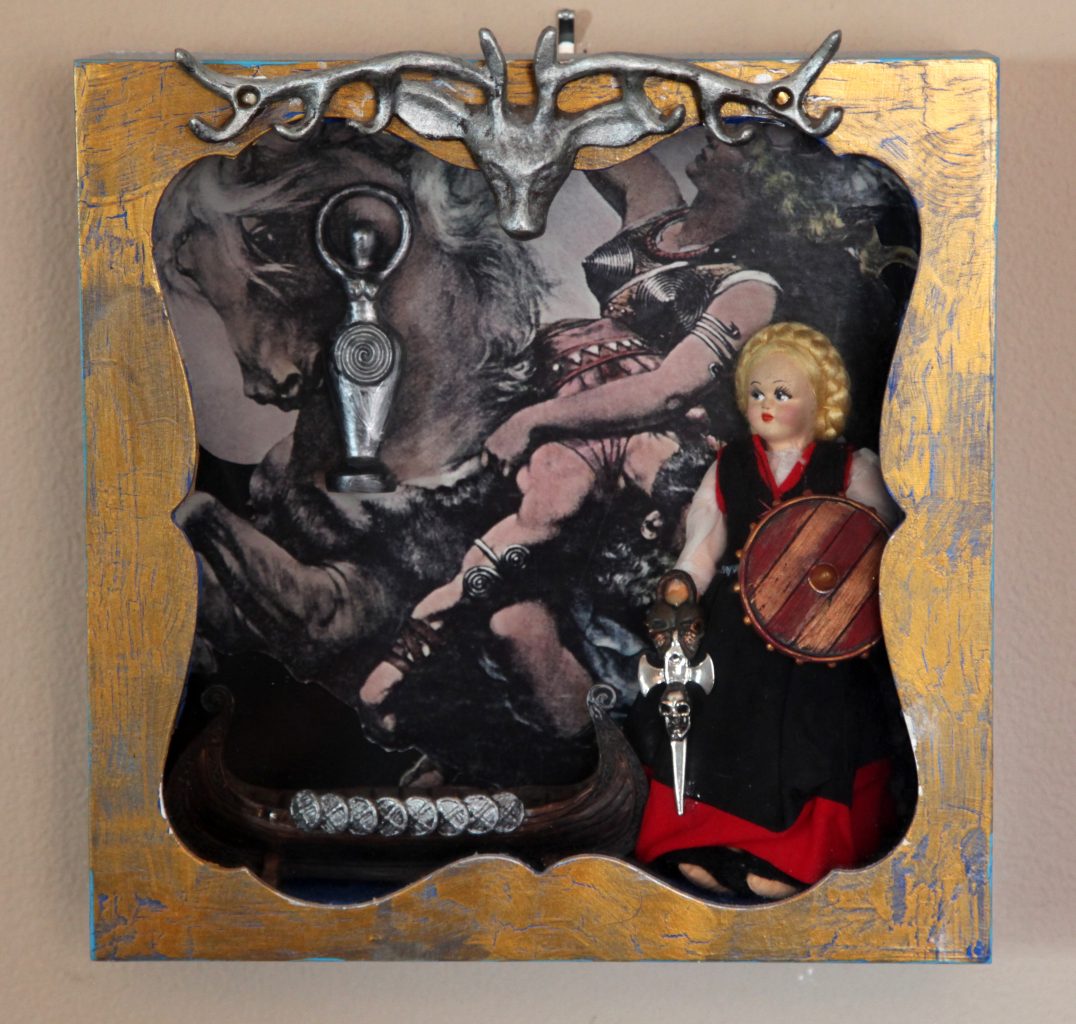 Blackerby worked toward a teaching certificate at the U of U but discovered while doing practice teaching at West High that she was “too short” in her chair to control a classroom of unruly teens. She studied other things instead, including philosophy with Tena Holbrook (who became a lifelong friend and admired “the passion, pain, joy, and life evident in each piece” of Blackerby’s work), writing (playwright David Kranes being a favorite professor), earning her bachelor’s in English and creative writing with a certificate in political science after six years on campus. She went on to publish short stories, essays and poems in magazines, complete a wicked-good, as-yet-unpublished novel set in turn-of-the-century Russia that has all the elements of a bestseller (IMHO) and write a memoir under the yearlong tutelage of Salt Lake City author Josh Hanagarne (The World’s Strongest Librarian). It’s about growing up in the ‘50s with polio (Blackerby spent a harrowing time in an iron lung) in a small Utah town that forced a child to experience birthday parties as a supposedly contagious “pariah” eating cake alone in the upstairs kitchen while her little friends celebrated in the basement; and to find the Sunday School classroom of her LDS ward moved after she had hauled herself in her metal leg braces to where class was supposed to be held. “My grandmother left the church over that,” she said. She wrote several books published by Llewellyn on subjects like dreams and numerology. (Blackerby was a gifted intuitive Tarot reader and fascinated by Chinese astrology.)

Melissa Rasmussen and Blackerby were co-leaders of the Speculative Fiction writing group that started in 2012. “Through many writers and many locations, she stuck with it,” says Rasmussen.  “Marcee always participated with her own writing as well as helped to critique and give positive, encouraging input to the work of others.  Where writing was concerned, Marcee was never afraid to learn something new, try something new, and was willing to teach as well. 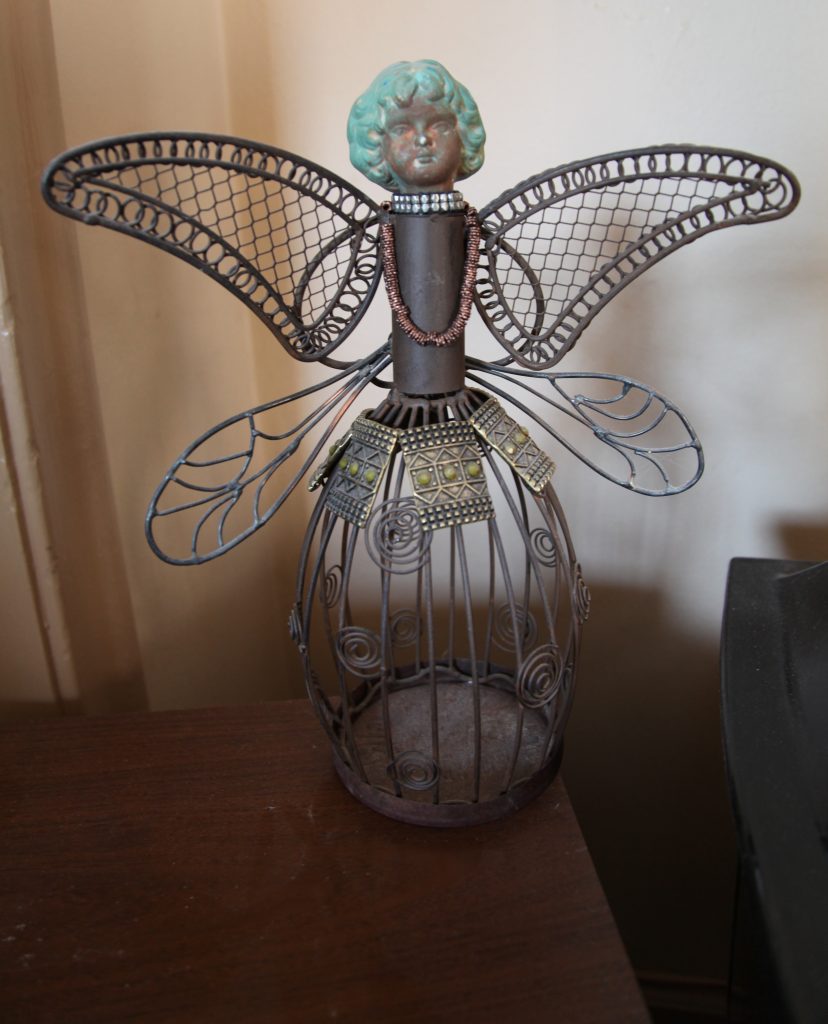 “She wrote with a strong, clear voice that quickly created distinct atmospheres in her work. She wrote with humor and cutting perception. But she also wrote with compassion and understanding.  Her writing covered a vast array of topics while always warmly highlighting the human condition.

“And like she made her art, she wrote her tales in a natural, authentic voice that pulled you right in,” Rasmussen writes. “Most of her works of art tell a visual story.  So I guess what Marcee really was, whatever she did, was a teller of tales.  Tales that made you think and inspired you.  She participated in public readings and writing workshops and read a sampling of her work on the stage at the Utah Arts Festival this past summer.  Recently she started pairing her words with her art in gift cards and was planning more of these kinds of pairings (primarily her poetry) in an art book.” 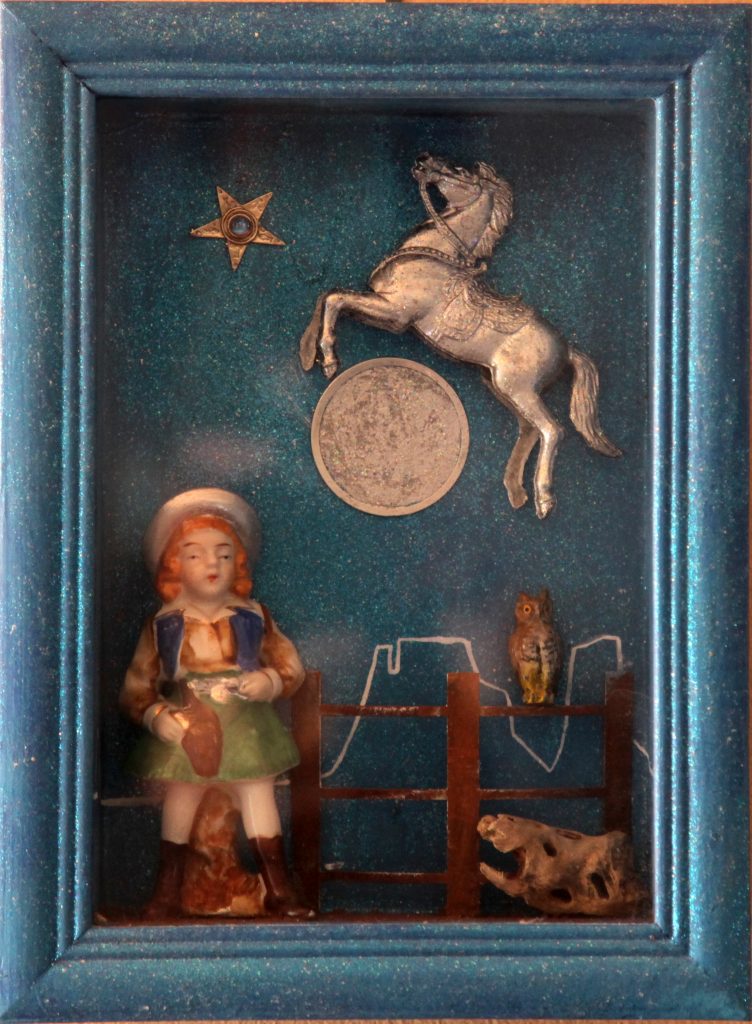 Blackerby had planned to spend 2020 almost entirely on her writing. She wanted to see her memoir and novel published.

“I choose things that have memory and spark — sometimes humorous, sometimes dark,” she wrote about her multidimensional mixed-media work, objects frequently contained within a box, a subject she once lectured about to The Jung Society of Utah. Yes, it was all that: Meaningful narrative work with an added element of mystery. This was art Blackerby didn’t pursue until the final third of her life, with the help and encouragement of her artist husband and reliance on her own distinctive imagination and flair. She created entire city skylines with neckties from Deseret Industries and worked with dolls’ heads dug up from pre-war mounds of earth in Germany. And she always returned to her fascination with what she could put inside of a box – those windows into the little worlds she invented. “In placement,” she said, “I attempt to explore secrets connected to objects, and present or create mystery behind social and human icons.” She added that she saw the box as a universal symbol of humanity. “We box up our dreams and our remains, our treasures and secrets. There is magic in the unopened box, the fabled chest, and the ancient tomb.”

For Salt Lake City artist and art instructor Toni Youngblood, “Marcee created unique fantasy worlds of disparate parts in her art and writing — colorful worlds I couldn’t have imagined or dreamed of in which I marveled and often laughed. Her vivid visual and written stories were plucky, surreal, but somehow strung along on a human Earthy cord. She was spirited, full of soul, spit, vigor … and she was kind and generous of her own self.” 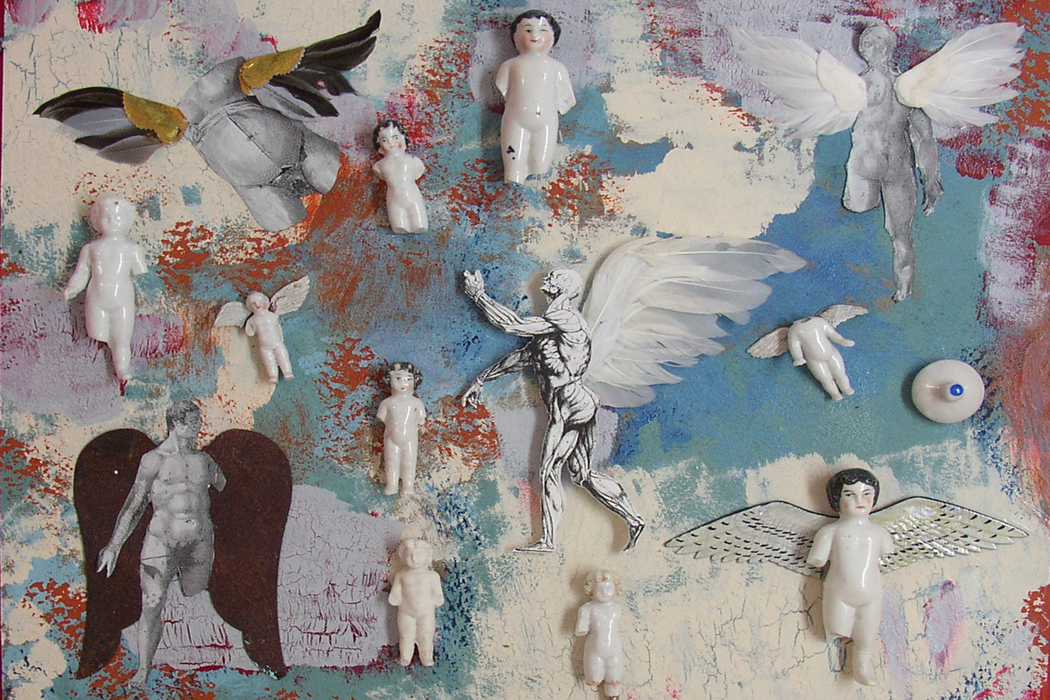 She showed her work everywhere, it seemed: Art Access, of course, where she also mentored emerging artists as part of their PARTNERS program; Finch Lane Gallery; the Wine Store in 2007; the Utah Arts Festival (even once or twice as a Featured Artist); Rio Gallery; Ken Sanders Rare Books; Craft Lake City; Tin Angel; Pioneer Theatre during a 2015 production of “Fiddler On the Roof.” She was selected as one of 12 International Fellows from 118 entrants to show at the Kennedy Center and Smithsonian in 2004 as part of a juried festival for artists with disabilities.

“Marcee Blackerby brought so much imagination to her art,” writes Utah artist Downy Doxey-Marshall, speaking for herself and her husband, artist Todd Marshall. “We visited her home a few years ago and we were so excited by her extensive collection of found objects, thoughtfully displayed works of art throughout. It made us smile as we remembered how it felt when we were young, thinking the world was full of possibilities. Her work so eloquently combines innocent curiosity with profound truth. In such a beautiful way she gave a voice to the discarded. She spoke of uplifting the human spirit and finding hope in the struggle. We will miss her bright spirit.”

Blackerby was widely collected, avidly so by her peers. William Littig and Pamela Grubaugh-Littig, close friends of the Blackerbys put it well: “We have the joy of living with Marcee’s art and it refreshes the memory of years of friendship, humor, and imagination left behind. Gone but not forgotten.” 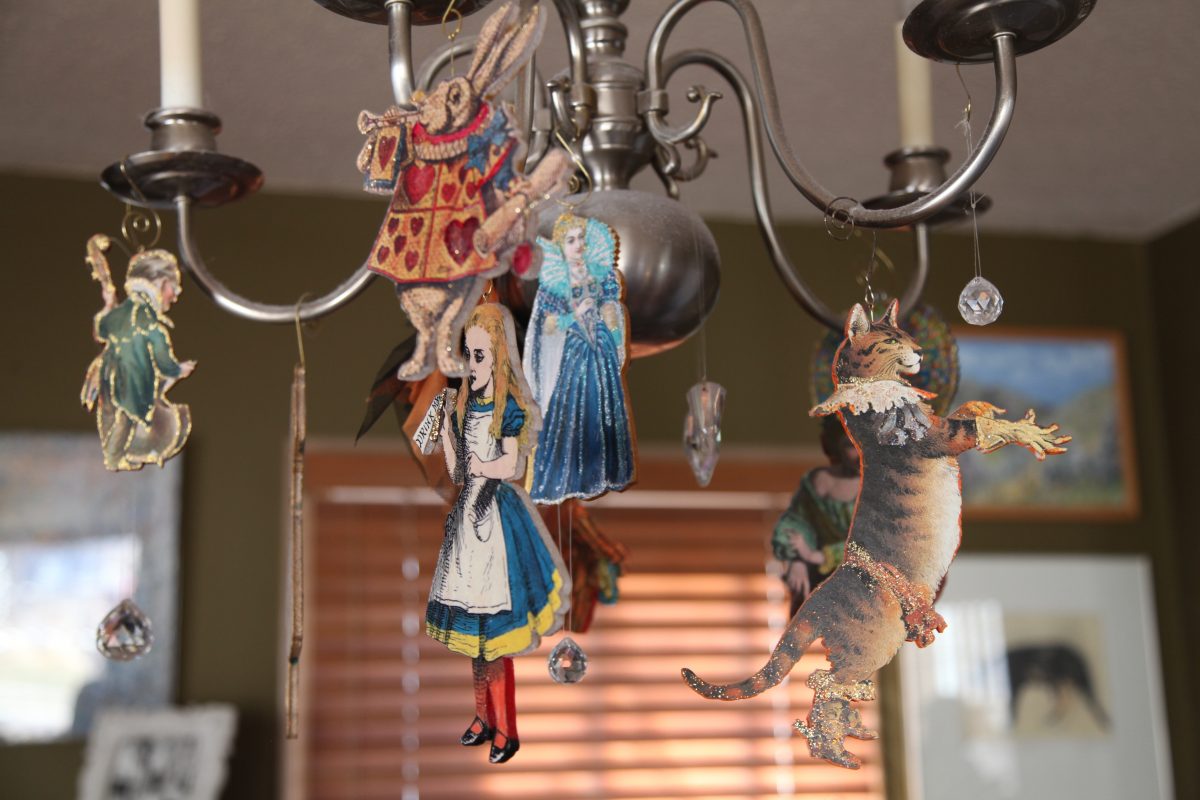 Ornaments by Blackerby inspired by Alice’s Adventures in Wonderland