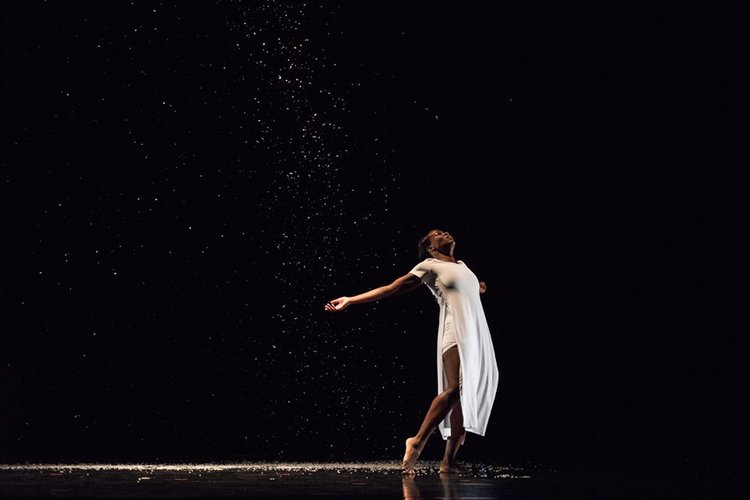 RDT’s season opening “Spirit” presented the company’s mission of “manifest diversity,” a play on the problematic ideology that led white Americans westward. Manifest diversity suggests that what was perhaps more inevitable than white settlement was voices of racially diverse Americans contributing to a broad national culture, including the advent of modern dance as an American form.

To engage in these ideas, “Spirit” presented works by two historical choreographers (Michio Ito and Donald McKayle) as well as by two working in the contemporary moment (Natosha Washington and Tiffany Rea-Fisher). In introductory videos, each choreographer addresses their work and Rea-Fisher’s comments lend themselves to this interpretation of manifest diversity as she describes modern dance as a form created by and for people, unlike ballet and other concert forms, which stem from royalty, religion, or both. This reality validates the concert’s aims but also troubles its premise. Because the works presented are made by people as varied as their ideas, their concepts are frequently at intellectual odds.

The concert opens with an array of short dances by Ito, whose work is representative of so many artists whose choreography was integral to the development of modern dance, but who were left out of a singularly Western canon of dance history. In “Time and the Dancing Image,” dance critic Deborah Jowitt links Ito to choreographers such as Martha Graham and states that he was known for combining Japanese sensibilities with more “contemporary formality,” an observation that is particularly resonant while watching “En Bateau (Blue Wave),” made a decade prior to another proverbial blue wave (“Serenade” by Balanchine). Watching the quintet of RDT’s women perform subtle and evocative gestural phrases in complex spatial patterns makes me wonder how many other dances of this type I haven’t had the privilege of seeing onstage.  This feeling also has consequences.

Knowing that later, Natosha Washington’s “say their names (part 1)” will address police brutality, I cringe to see Ito’s “Cake Walk” included in the program. While adeptly performed by Tyler Orcutt, “Cake Walk” draws on minstrelsy with no sense of irony (not to mention the Debussy score’s reference to the racist caricature Golliwog). The inclusion of the dance asks questions about how dance companies can best curate racially and culturally diverse programming. I suspect it’s not about the range of the material offered to audiences but instead, the material’s sufficient historical unpacking.

While “Cake Walk” did not wholly detract from the more compelling moments in “say their names” it does undercut them. “Say their names” has multiple and cumulative beginnings and a strong moment of assertive partnering between Ursula Perry and Megan O’Brien. The dance ends with the full cast clad in white and surrounded by snow; they gaze over their shoulders toward the audience, demanding our complicity or our action.

This complex interaction of ideologies persists into the second half of the evening. Tiffany Rea-Fisher addresses the role of female friendships and, at first, I had the same feelings of excitement and longing as I did while viewing “En Bateau.” How many dances about women have I been denied while watching heterosexual partnering? What would it be like to watch more of this absorbing musical material in which Jaclyn Brown excels? And could Elle Johansen please collapse so readily into the arms of another friend and continue her skitter backwards to the audience’s comedic delight?

At the conclusion of Rea-Fisher’s “her joy,” the inimitable Donald McKayle comes to the screen. While I’m (truly) delighted to hear about “Rainbow Round My Shoulder,” a seminal work about men on a chain gang, I become hung up on his verbal reminder that the woman in “Rainbow” is not really a woman at all, but instead serves as an archetype of a sweetheart, a mother and a wife. Her mythology buoys the men through their crisis without addressing her own. “Rainbow” both paves the way for Rea-Fisher’s future work and necessitates it, by framing a view that women are anchors for male experiences.

Despite this reckoning, “Rainbow,” is performed beautifully and does all of the things previous critics have lauded. As Gia Kourlas described in The New York Times during a 2016 re-staging, “The exhaustive, angular swinging movement for the men came from the idea of forced labor,” and RDT does not shirk the exhaustive portion of the responsibility. Dancing to traditional chain-gang songs, the company’s men, and guest performers, are both precise and passionate. When Efren Corado Garcia carries Tyler Orcutt away at the conclusion of the dance (“another man done gone…they killed another man”) the physical line of the dancers is a spatial metaphor for the passage of time. As the chain gang exits the stage, the dance should feel dated but the concept is, regrettably, still an American present.