“He could have been almost anything he wanted, but he chose to be a bad artist. Nobody will ever know why.” 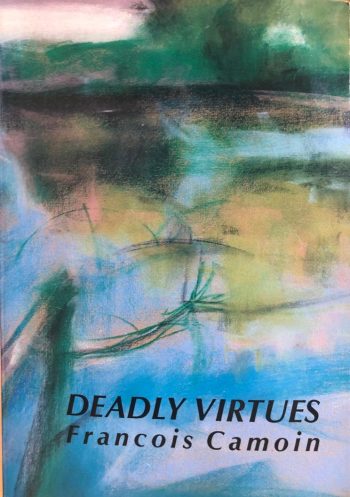 The “bad artist” that Buckdancer Skinner refers to here was his father, Adam Skinner, whose disappearance and possible demise reunites his three sons, 33 year-old Jacob, 27 year-old Buck, and 19 year-old Carlo, who was the only one still living at home when Adam disappeared. These men are actually half-brothers, each having emerged from one of Adam’s three successive marriages, but they feel strongly the conflicting attractions and constraints of family ties. These loyalties, and the accompanying desire to make something of oneself, form the paradoxically “deadly” virtues of the work’s title.

Cinema and TV have accustomed us to having conflicts presented and resolved in an hour or two, so the slow progress the Skinners make as they unravel their past and present dilemmas feels more like real life. Initially, per Elizabeth Kübler-Ross, they refuse to accept their father’s death, but invent reasons not to return home while he remains missing. Adam has consigned his competent, but underpowered art to the many small galleries boasted by tourist towns up and down the Oregon coast, which the brothers visit to sample the mood of the market. Then a body turns up and they begin to cope with possible loss, followed by new opportunities and the responsibilities that come with them. Talk of a tragic accident is replaced by a more emotional discussion of suicide, but becomes complicated when events raise the specter of murder. There are tragic revelations, and then there are tragic events. Deadly Virtues indulges in the one before veering unexpectedly into the other.

Deadly Virtues offers readers a welcome antidote to a widespread cultural cliché that says, “Do what you love and the money will follow.” While Jacob settled for a career in law, something that earned him a living but little respect from others or even from himself, both Adam and Buck followed their zeitgeist, the spirit of their moment in history, which led to Adam’s disappointment and Buck’s bohemian, hard-scrabble life, to which he now realizes he’s in no hurry to return. Students and survivors of the counter-culture of the  ’60s also know it wasn’t an enlightened time for women’s rights, in fact eventually producing the Women’s Movement; Camoin’s stories, and especially his dialog, capture the hostility of men towards women vividly.

Camoin is conventionally described as an American writer, though he was born in Nice, France, in 1939. His mother later married a G.I., and, when Francois was 13, they moved to America. He earned a Ph.D. in 1967 and taught briefly, then caught that spirit of the ’60s and spent the next decade working as a carpenter, organic farmer, and a door-to-door encyclopedia salesman. But it as a teacher that he excelled, and from 1978 until his retirement in 2011 he taught writing at the U of U. In spite of his eight books and eighty short stories, he said he was a teacher who writes rather than a writer who teaches. Nevertheless, he founded the U’s prestigious MFA in Creative Writing program, and was credited by students for having been one of their most influential professors. On the other hand, fans of Mark Twain’s use of “French” as the ultimate epithet may smile at how often French family backgrounds and the French passion for Reason appears in Deadly Virtues.

There isn’t supposed to be any accounting for talent, but Camoin’s accomplishments make an argument not unlike the one that says a mutt will perform better than a pure- bred animal. An adolescent forced to change cultures and languages may grow up to be a better observer and to express himself more clearly, just as a variety of vocational experiences may pay off in unexpected ways. Here’s Buck in Adam’s studio:

All around the walls, bolted steel shelves held my father’s tools; the floor was scarred where he had dragged stones and heavy timbers over it; deep burns marked spots where casting metal had spilled over.  He’d uncovered and reinforced some of the ceiling beams to support chain hoists and intricate collections of ropes and pulleys. It was, I saw for the first time, a room where a man of character has wrestled with life for a long time.

Of course Buck could have just mumbled something along the lines of “craft builds character,” but his reverie reveals so much more, and more convincingly. Or maybe it’s not the verbal picture: Camoin taught that it wasn’t so much description that makes good writing, but the persuasive music of the words. And he also wrote this about sanity and insanity:

If a man could see things that other people didn’t, and dodged around them, everybody would think he was crazy, but it wouldn’t be the case at all . . . . After a while that man would have to pretend he didn’t see any more than anybody else. Then he would be crazy but nobody would know.

In Deadly Virtues, published in 1988, Francois Camoin writes beautifully, evocatively, successfully about people who struggle to connect and master the means of living, and who experience ugliness, narrow-mindedness, and failure in the effort. But because his characters do possess virtues, whether we agree they are deadly or not, and because they keep faith with their ideals and values, their stories engage us and argue persuasively that losing the struggle is not the same thing as failure.

Sadly, Camoin died in 2019, so new works are unlikely to be published. Some of his stories are available on subscription websites, but perhaps it’s time some of his books were republished and discovered by a new audience.