Making and Unmaking Monuments in Ogden’s The Monarch 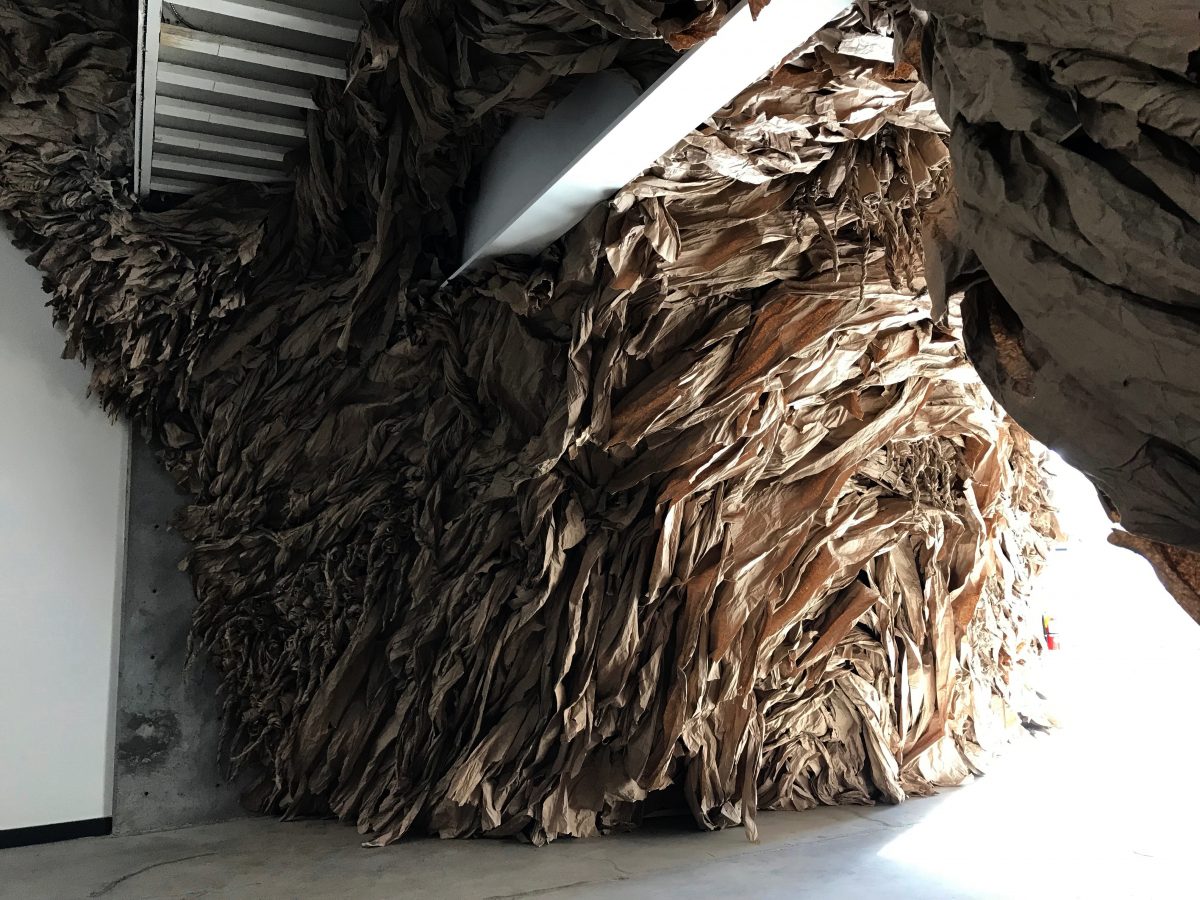 “Unmaking Monuments” at The Monarch in Ogden

In the lobby of The Monarch, a multistory building in Ogden’s Nine Rails Creative District, brown craft paper hugs the wall in undulating rolls and reefs, forming an archway between two sections of the building. The work of Maine-based collaborative duo Wade Kavanaugh and Stephen B. Nguyen, “Unmaking Monuments” was completed over a two-week period in late September by Kavanaugh and a team of community volunteers. As it was slated to be opened on Friday, October 4, rumors circulated that the Fire Marshall was going to have it torn down.

“I was pissed when I found out about it this morning,” said Kavanaugh on the night of the opening, as he was reunited with the community members who helped build the project. “But I’ve decided to embrace it.” During the installation process, an operable sprinkler head was accidentally covered, prompting the intervention of the fire marshal (who for the evening of the opening agreed to a compromise: one of his officers was on hand, fire extinguisher nearby). The work, Kavanaugh says, was as much about “preamble” — about the process of working with the community, of transforming the space, of the dances performed and the poetry and music commissioned in conjunction with the installation — as the final project; so if it had to come down, he could live with it. 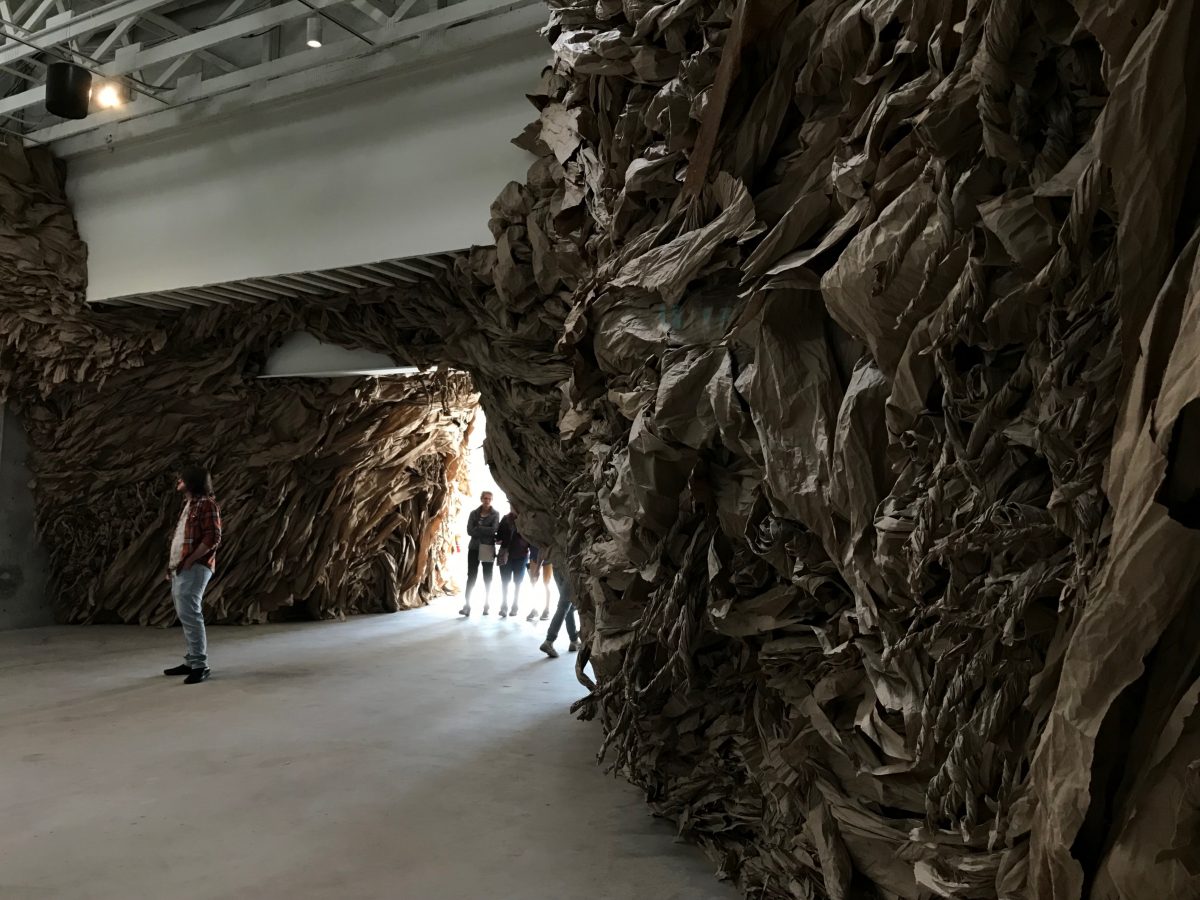 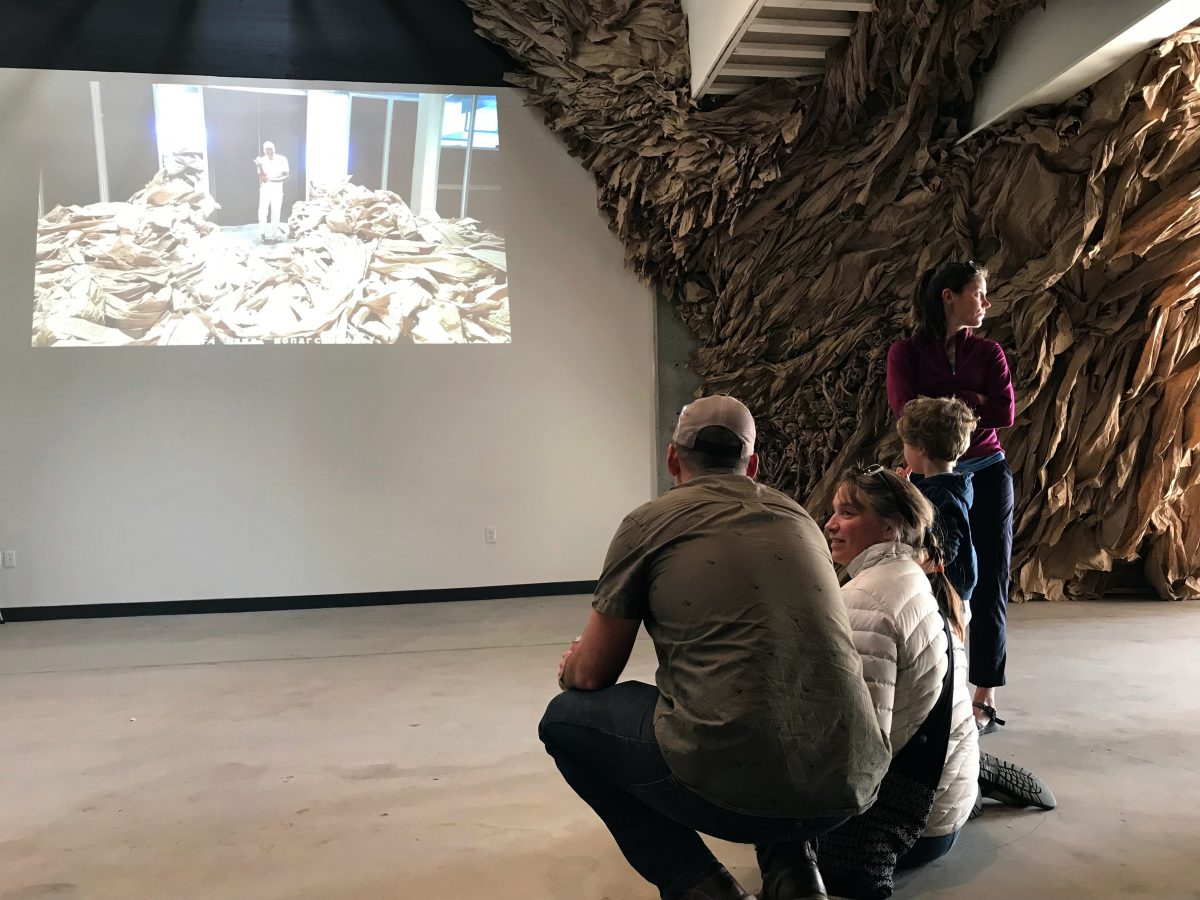 Wade Kavanaugh, in front of his stop-action video for “Unmaking Monuments,” talking with one of his collaborators.

At the night of the opening, Kavanaugh screened a stop-action video that documented this process. It shows the paper washing in and out of the space, building up and falling down. Against this backdrop, Jo Blake, formerly of Ririe-Woodbury Dance Company and now a faculty member at Weber State University, and Ashleigh Richardson, a dancer at Ballet West, responded to the piece. O1 ARTS, the Ogden arts nonprofit headed by Scott Patria that brought Kavanaugh to town as its first Visiting Artist-in-Residence, also commissioned poetry and music in response to the installation.

That emphasis on process comes directly from the piece’s inspiration — the geology of southern Utah, a place where ancient sand dunes-turned-rock were sculpted by wind and water over millenia. If a piece has to be cut out from “Unmaking Monuments,” if it is to be diminished from its original conception, it won’t be unlike the national parks and monuments Kavanaugh visited for its inspiration. 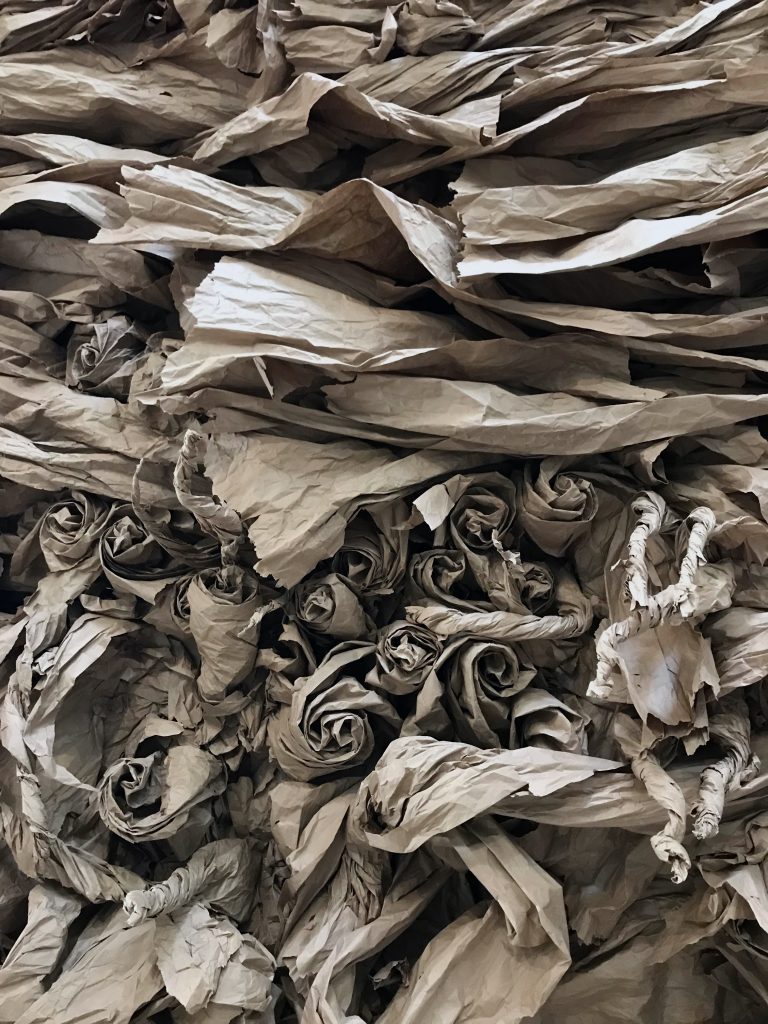 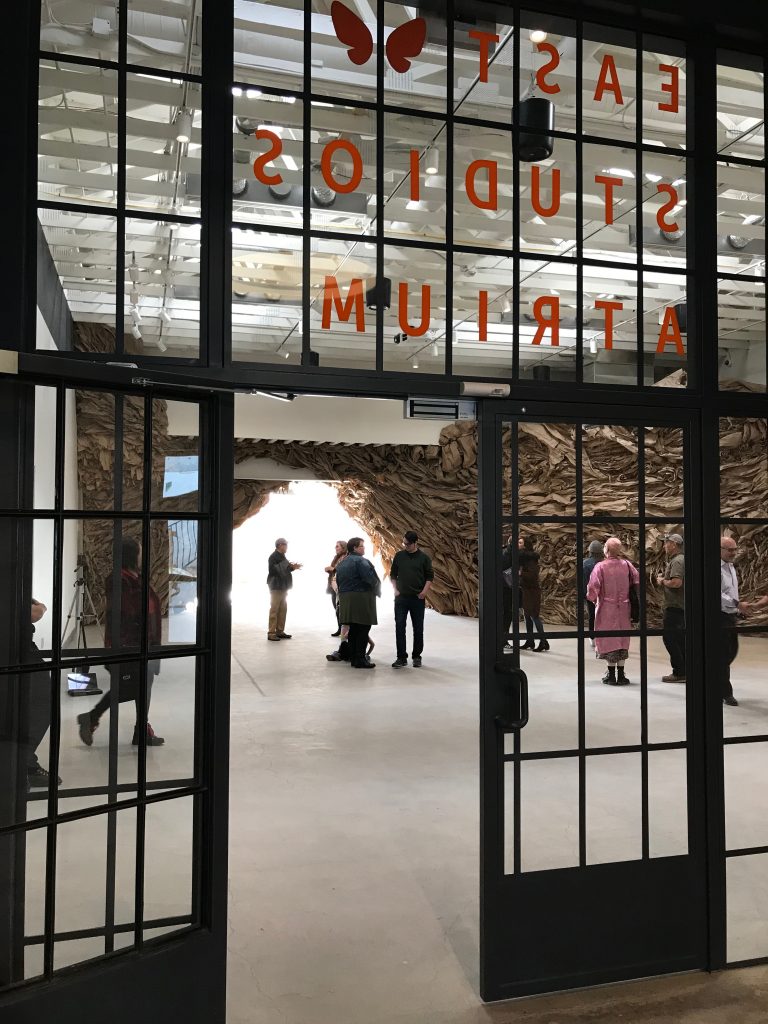 The Monarch itself has gone through a long transformation. The former hotel garage is being built into an event venue and creative workspace that will include indoor and outdoor reception spaces, restaurants and studios. Many of the latter, measuring 200 to 300 square feet, are finished and were open for the unveiling of “Unmaking Monuments.” They will be open again on Nov. 1, when The Monarch celebrates its Grand Opening with a ribbon-cutting ceremony, studio stroll and live music performances by Mojave Nomads, Lovely Noughts and Sam Brue.

O1 ARTS has signed a lease for a large exhibition space in the building, slated to open in Spring of 2020. The organization has already initiated a number of art projects in the neighborhood: PLATFORMS, which has transformed the vacant lot across the street from The Monarch into an outdoor performance and exhibition venue; WALLS, a mural project which has included work executed in everything from old school graffiti to 21st-century technologies by local, national and international artists; and PANES, which converts vacant storefronts into temporary exhibition spaces. XIBIT, on the northwest corner of The Monarch, will become their “flagship ‘flexhibition’ space for contemporary visual and performing art.”

In the meantime, in this second week of October, Kavanaugh is at work re-sculpting his piece according to a Fire Marshall-approved design.

For more information on The Monarch visit themonarchogden.com. O1 ARTS can be found at ogdenfirst.org. 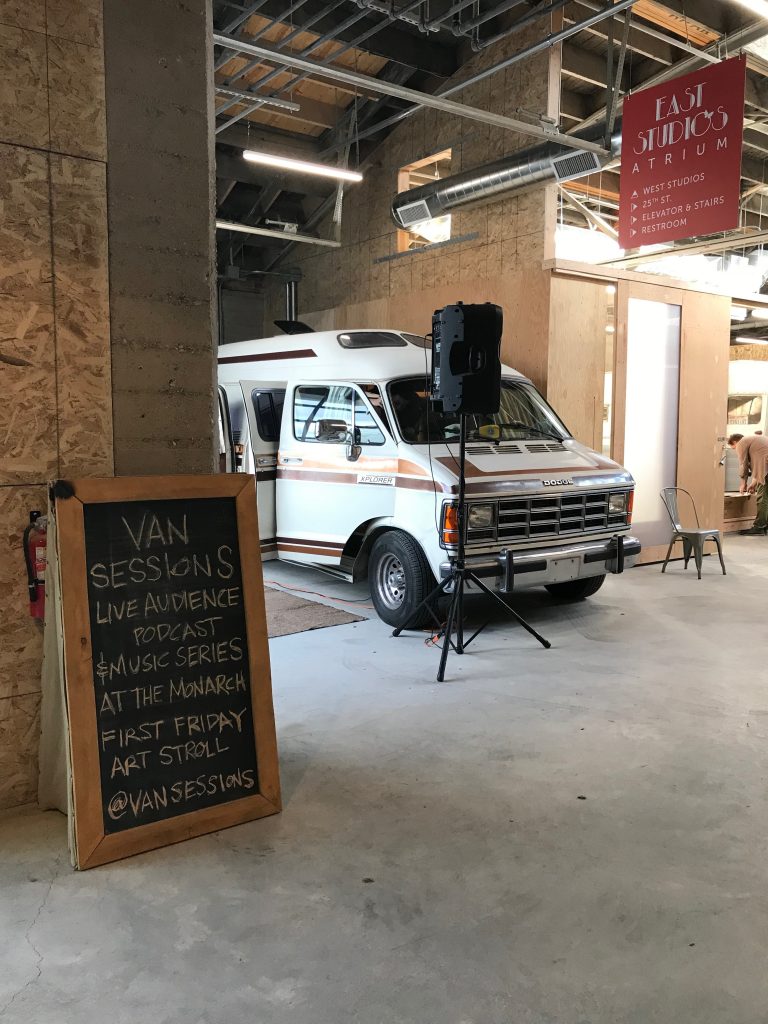 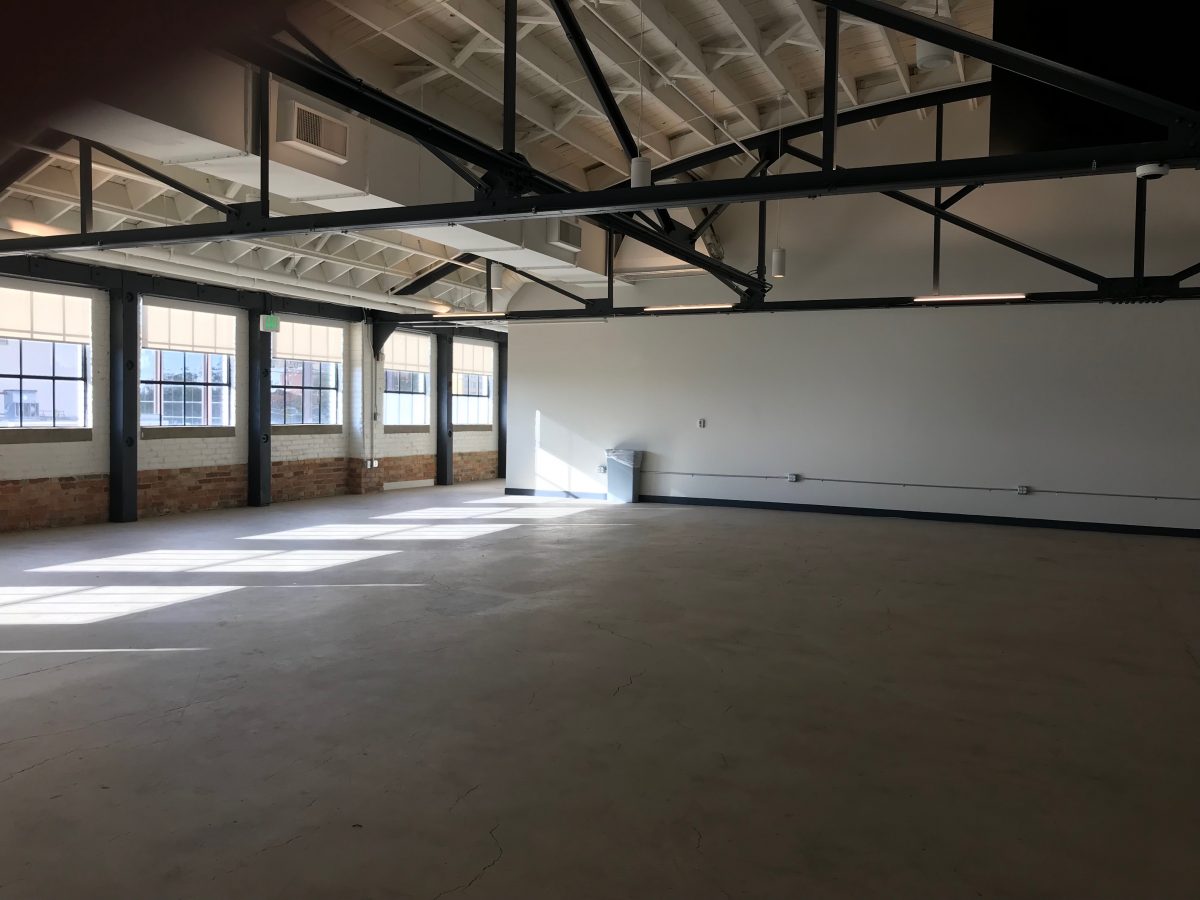 Reception area on the top floor of The Monarch 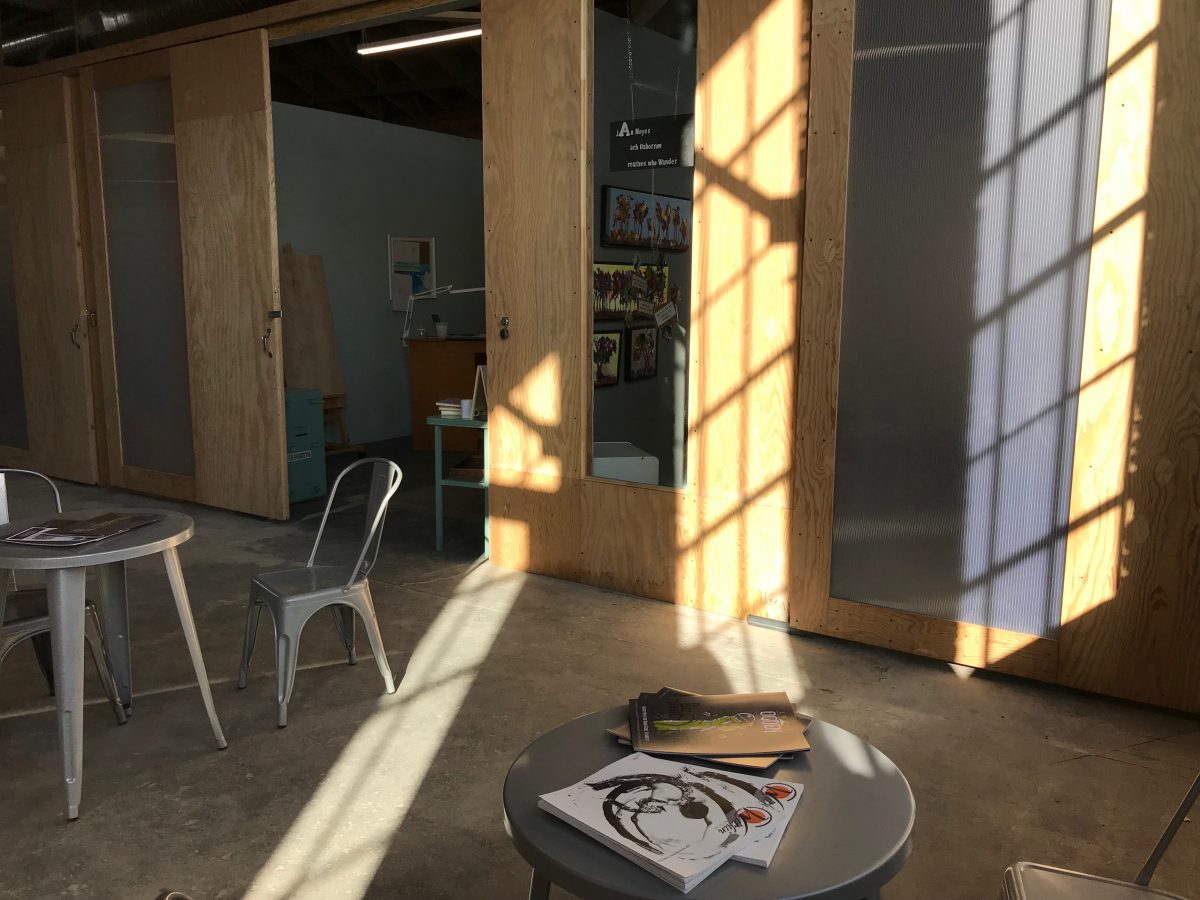 Studios at The Monarch