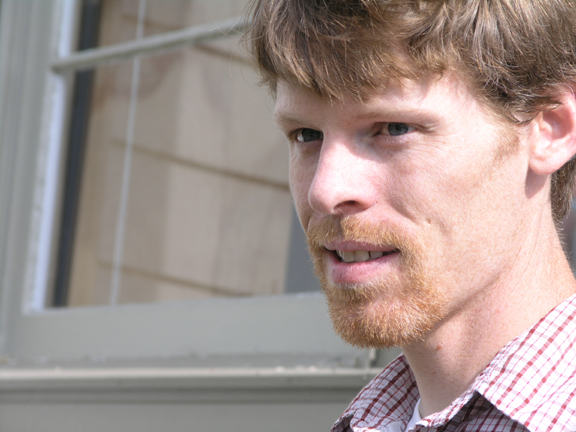 Dangerously conservative. That is a criticism Utah artist Madison Smith received in graduate school from a professor on his final review committee at the San Francisco Art Institute. Although he doesn’t seem phased by it, it is a comment he will never forget.

Smith is now a full-time artist working out of his home in Holladay. He is also an award-winning artist. The Utah Arts Council granted him one of two 2005 Fellowship awards and a juror’s award at the 2005 Statewide Competition earlier this year. In 2003, New American Paintings honored him by publishing his piece on the cover of their Open Studios Pacific Coast Competition. His work has matured substantially since Graduate School, but he still laughs at his professor’s “dangerously conservative” critique. 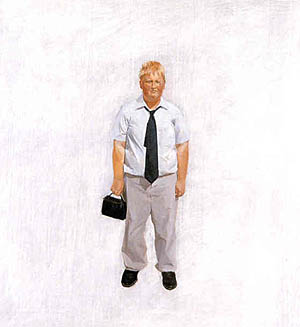 Smith’s professors also felt his artwork was too enigmatic. “I agree with that to some extent, although the paintings did say what I wanted to say at the time.” The paintings were of isolated figures, all strangers, communicating only through body language and the spaces between them. His advisors pushed him to reveal more about his subject matter and paint a more specific point of view.

“I wasn’t sure if I wanted to. And they always felt I was withholding information. I think they thought it was some secret belief system.” Smith does have a belief system, but it’s no secret. He was born and raised in Salt Lake City, and before he ventured out to San Francisco he received a BFA from Brigham Young University. He was surrounded by LDS artists his whole life including his uncle, portraitist and BYU professor Bruce Smith, who encouraged him to pursue art as a major and a career.

“It’s kind of different coming from a church school. If it’s not discussed, it’s implied that you’re trying to express a certain spirit in your work or you have a role as an LDS artist. It doesn’t always come up directly, but it’s an underlying theme. That’s a pretty difficult thing to come to terms with for BYU students and then when you leave, you take this extra baggage to reconcile when you’re among other students who have a different background. It’s a difficult thing to figure out because you have to explain why you do the things you do.” 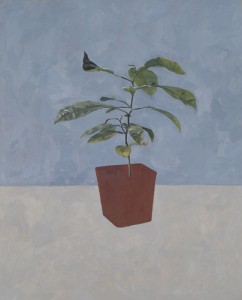 Explaining his artwork verbally is something Smith feels he never had a knack for. “Sometimes it’s so personal, that I have difficulty explaining myself.” This lack of verbal explanation adds to the enigmatic nature his professors once accused him of, but discussing his work verbally, and in writing has become easier for him.

During his second year in San Francisco, Smith’s professors understood a little more what he was trying to do, but he chose to maintain an ambiguous element. In 2002, Smith began a series of figure paintings inspired by the teenagers he taught in Sunday School. These portraits are simple in composition. They depict a lone figure standing in a blank space, dressed in Sunday School attire and carrying a scripture bag. Smith hesitated to reveal what it was exactly that each student carried. “A lot of people thought it was a little lunch bag or a small briefcase and this boy was pretending to be an older man going to work, or it was a mother’s purse that he was asked to carry. Some people thought it was a boy confused about his sexuality. I liked that because as a young LDS boy or girl, growing up in a place like the Bay Area where there aren’t very many Mormons, you see their awkwardness all the time as they come to terms with their own beliefs and how they root them in their environment.”

Smith didn’t want to reveal too much in his pieces because he liked the peculiarities that people observed. When he did explain how they were painted from a photograph he took at church, some viewers related to the figure immediately and told him stories about how they were forced to go to church with their parents, and how once they were old enough to rebel, they stopped going. 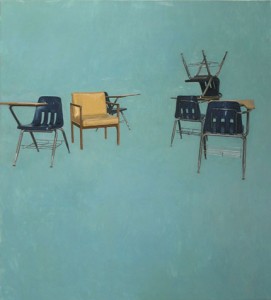 These figure paintings encouraged Smith to further explore a theme in his work concerning the relationship between growth and restraint and nature vs. nurture. From that body of work grew a new series of potted plant paintings as a metaphor on the same theme. He painted each plant first in 2002 and then again in 2003. The paintings display a calculated and careful record of these plants as they matured. It has become somewhat of a journal for him. Smith keeps the plants in his yard and plans to paint them again. He grafted one of them, some have died, and the others continue to grow.

“Just watching them in these different stages I started to think more about making paintings that were a record of my experiences as opposed to my more impersonal work in graduate school.” By creating more personal work, Smith’s message narrowed and he did find a more specific point of view – just as his professors advised. He began to make models of the things around him and painted from those. He constructed a scale model layout of his apartment in California. And then he made models of furniture from his past (as well as his memory would allow), arranged in different ways. He described it as “reconstructing the past and making it more material.” 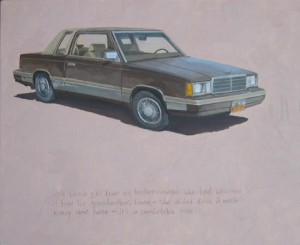 Some of the furniture in these paintings are unfinished or broken. “I like that as a metaphor for memory. A lot of times we can’t figure out how to put things together or make sense of them because they’re not whole anymore.” He also stacked some of the furniture as a representation of stacked rocks or “cairns” that serve as markers on trails. This is a powerful symbol concerning memory and markers in one’s own life.

Smith’s furniture paintings prompted a new series in which he painted cars from his past. “Immediate memories come to mind when I think of each car and I like the way that cars have the power to do that. I think everyone remembers the cars they have or had, and they have memories that are specifically tied to them or that are recalled from the image. All those memories are intermingled somehow.”

Obviously, this idea of memory and its characteristics is something Smith has been thinking about for awhile. He says these more personal paintings are recreated memory from the fragments that remain in his mind. “They become a new memory or an updated memory; part of the present. Because of the way that we gain more experience and memory, our memories of the past are constantly changing – or the way that we think about them changes.”

The whole notion of the past and fragmented memories allows for an ambiguous quality that is clearly a consistent thread in Smith’s work. He recognizes that these themes relate to nostalgia, which often has a negative connotation in art along with sentimentality, but it’s an idea that he’s been thinking and studying about.

Smith prefers to flesh out an idea and spend time with it before he puts it on canvas. There is an emphasis on craft and technique that most BYU students absorb beautifully. Smith’s work is no exception to this tradition: he prepares his surfaces carefully and knows his medium well.

While BYU taught Madison Smith technique, The San Francisco Art Institute taught him how to communicate content and subject matter more effectively. Obviously, it is the ambiguous that continues to motivate him as he paints with a more personal perspective. Smith plans to continue exploring memory, making connections between past and present and ultimately creating a new historical narrative in what he chooses to reveal. 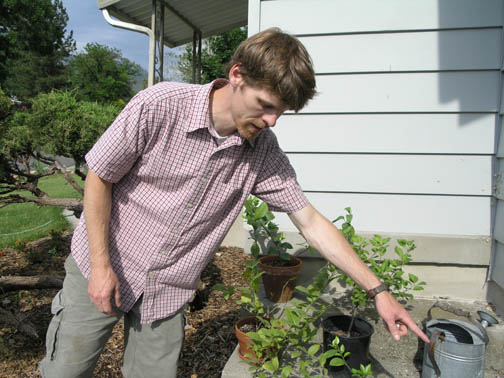 This September, Madison Smith will exhibit at the Rio Gallery along with Utah Fellowship Award winners Paul Stout, Karen Horne, and Steven Larsen.

Madison Smith is represented by the Hespe Gallery.