Madeline Rupard and James Castle: It’s Never Too Late to Fall in Love 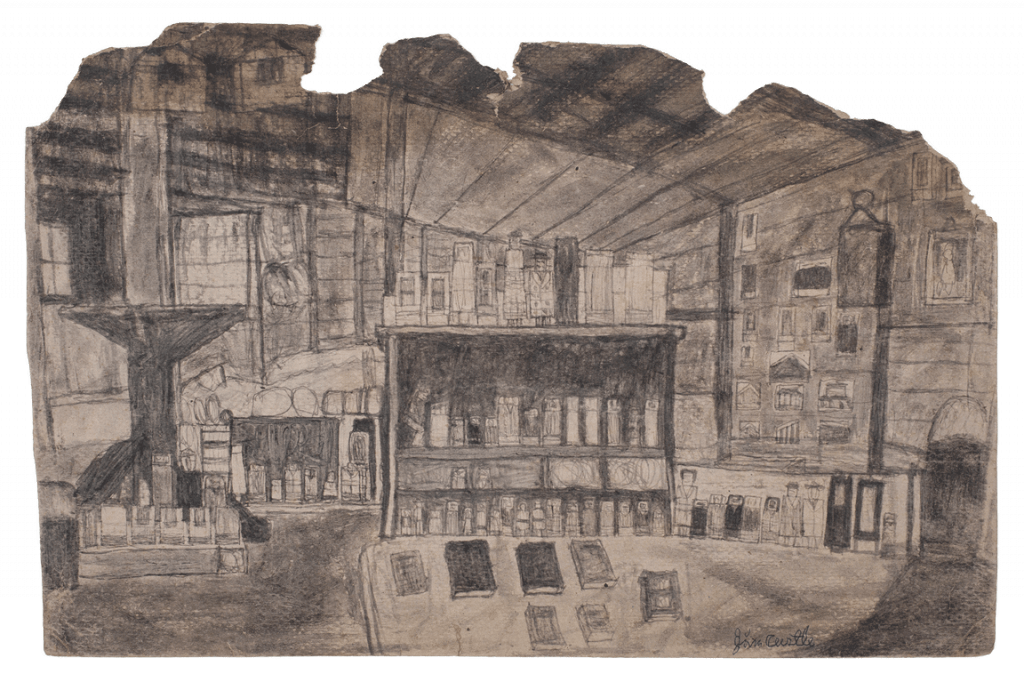 Untitled work by James Castle on found paper made using soot and the artist’s spit, The James Castle Collection And Archive

Those of a certain age may remember the 1997 exhibition of James Castle at the Salt Lake Art Center, back when Ric Collier was the director:  small works on cardboard, depicting interior settings and rural scenes, made using the Idaho artist’s spit mixed with soot from the fireplace.

That was before Madeline Rupard’s time, and she regrets not learning about Castle sooner. “Sometimes you find artists who you are so moved by that you’re almost upset no one told you about them sooner. That’s how I felt when a painting professor a few years ago casually mentioned the artist James Castle … A quick google search of his name yields hundreds of drawings and sculptures he made throughout his 20th-century life (1899-1977) in a humble grisaille. The artist [born deaf-mute] rarely left his small mountain town of Garden Valley, Idaho. He worked in isolation from the modern art world and its various movements, yet today his work is eagerly acquired by institutions such as the Whitney Musem of Art, David Zwirner, MoMA, and private collectors.” 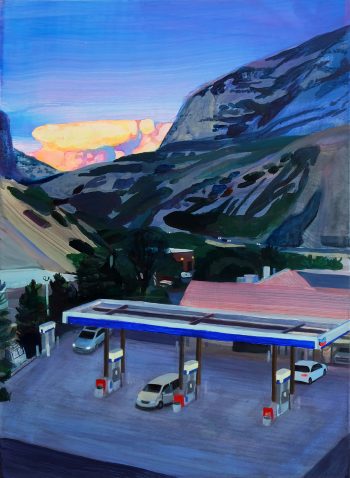 Madeline Rupard, “Right Before Therapy,” acrylic and urethane on panel, 18 x 24 in

By contrast to Castle’s geographically restricted life, Rupard was born in Utah and raised on the East Coast, moving frequently and often traveling long distances. “A sense of wonder at the modern world, and transient, lonely observation is instilled in my work,” she says. “I am always passing through. I paint pictures to describe the overwhelming sensory effect of the American landscape: the suburban in conjunction with the sublime, the mysterious in the mundane, and the ancient and man-made running up against each other.”

“Beyond his collectability, what stirs me in the work of James Castle is the sensation I get that I am looking at the world for the first time —again and again,” Rupard says. “His subjects were his daily reality; from friends, family members, and farm animals to the landscapes he moved through and rooms he lived in.  There’s some quality of his line that is tender, curious, and feeling. While he attended a school for the deaf and blind, he never fully learned how to read and write and turned to image-making as language. The writer Annie Dillard once said ‘For the newly sighted, vision is pure sensation unencumbered by meaning,’ describing those who were born blind and who’s vision was restored to them later in life. James Castle was not blind, yet something in his work feels untethered to language, closer to a recalled image from a dream or memory.”

Rupard says artists can be divided into two camps: “those that embellish and those that reveal. By embellish, I mean to exaggerate and hyperbolize —I think of the trend of ‘wacky figuration’ that has emerged recently in Manhattan galleries in the late ‘10s, early ‘20s of this century, which seems to have nickelodeon as its guiding light. Then there are those that cut right to the core of things; who stare deeply into the ordinary world as it stares back at them. While I think all artwork is valid, I confess I long to be the latter but fear I am too often the former. From their quiet observation and urgency to get it down on paper, this second group manages to disclose hidden familiarities. I feel this particularly strongly in Castle’s drawings of barns and houses. When I spend time with James Castle’s work, it grounds me and reminds me why I am an artist; to record this strange earth and to offer one more way of seeing it. When I look at James Castle’s drawings, I feel as if I’ve lived every day of his life.” 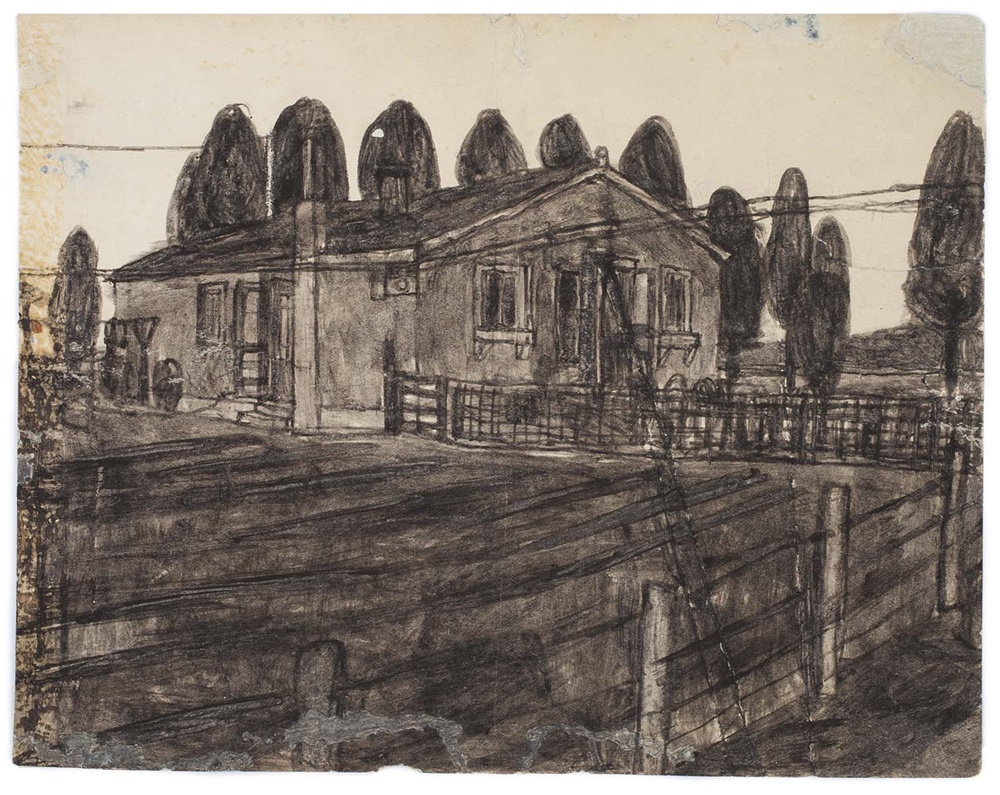 This untitled work shows the artist’s house on Eugene Street in Boise, Idaho, The James Castle Collection And Archive

Rupard began her art studies at Brigham Young University (BFA, 2016) and earned an MFA from Pratt Institute in 2019. After a year-long visiting professor appointment at BYU, she recently returned to New York as a working artist. Her work appeared in Salt Lake City’s Alice Gallery (see our review) and will appear in the forthcoming summer issue of New American Paintings Juried-In-Print Exhibition #156, West edition. 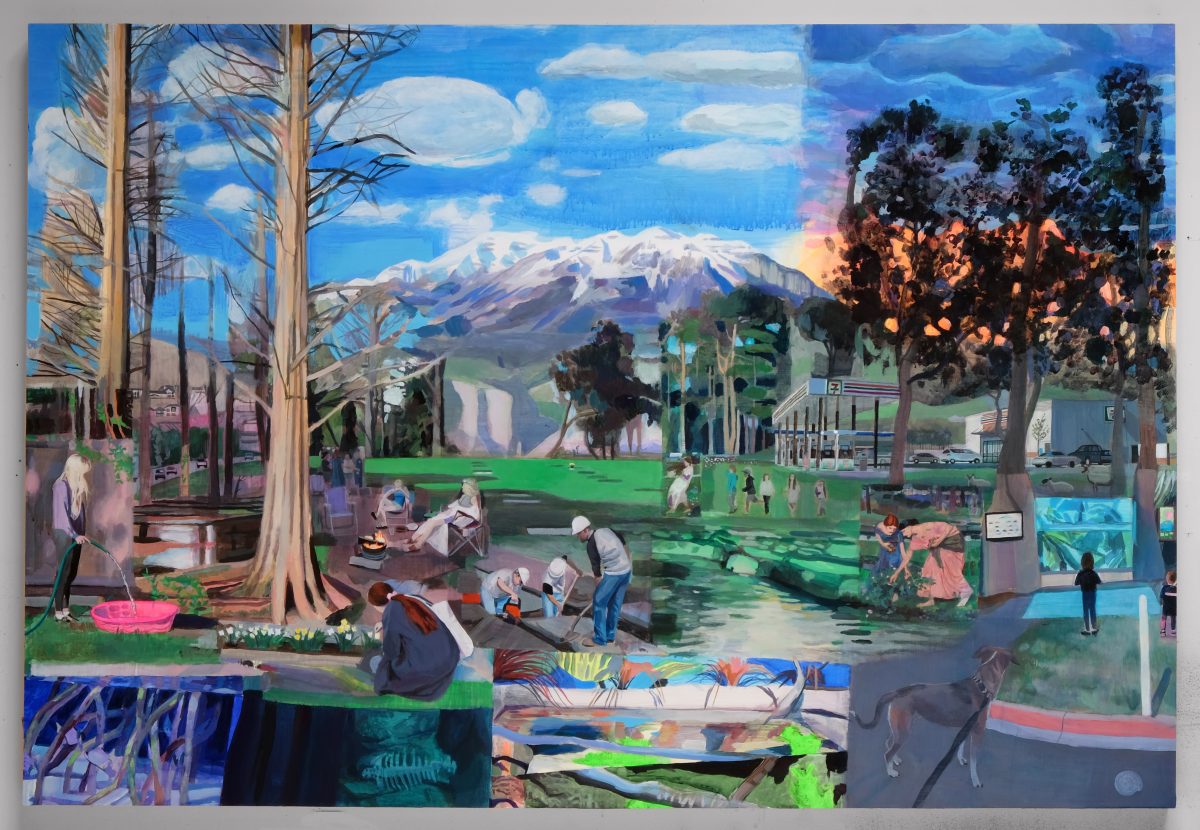 You can learn more about James Castle here: https://jamescastle.com. Castle is also the subject of a new book. There is a residency for visual artists held at the James Castle House every year in Boise, Idaho. More info on applications here: https://www.jamescastlehouse.org/residencies. You’ll find more of Madeline Rupard’s work at http://madelinerupard.com.