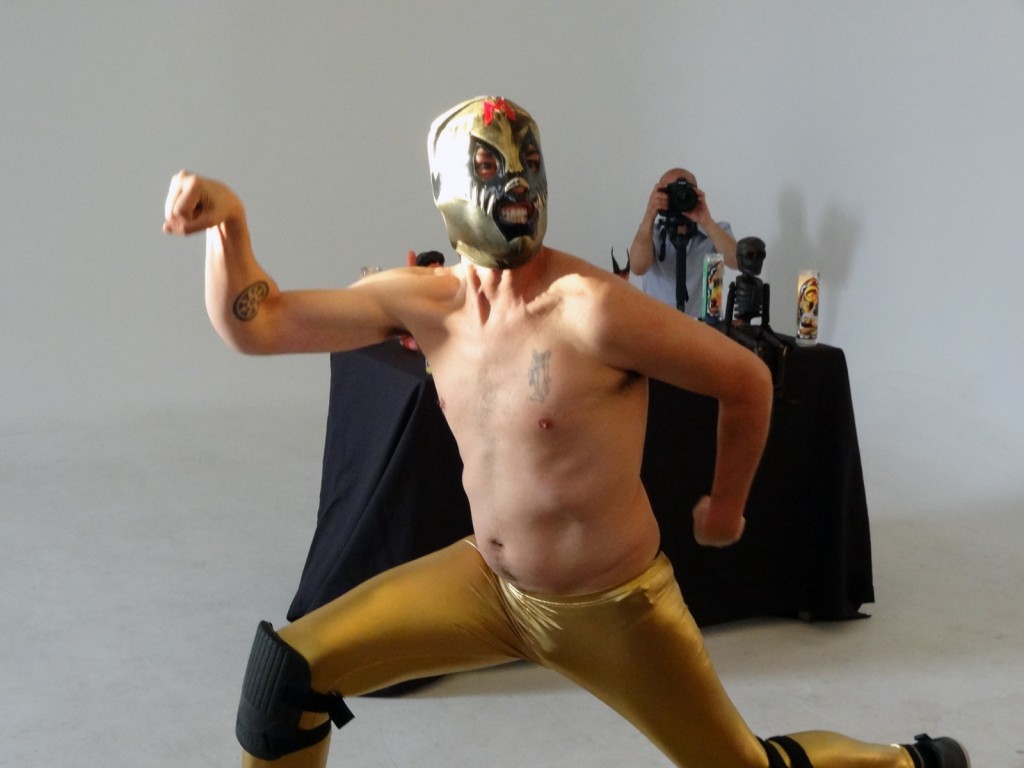 Mil Mascaras prowls the large alcove at the corner of the gallery like a trapped, feral animal: circling, pacing, as though seeking a way out? Or a way in? His lithe, wrestler’s body is tense as he speaks earnestly, then suddenly strikes an aggressive pose, resumes pacing, then pounces again. His movements strike a familiar, visual chord the listener eventually connects through the story he tells, recognizing in it the child’s practice-for-life called ‘play.’ He earnestly pretends to be his childhood hero, exactly as he explains he and his playmates would do. Where elsewhere little girls might play house, or boys play gangstas or Spiderman, Jorge Rojas and his childhood playmates eagerly followed Lucha Libre, or Free Wrestling—the Mexican equivalent of the World Wresting Federation, in which masked and caped, larger than life figures embody the ethos of Good and Evil—and celebrated them by showing each other their own moves.

Mil Mascaras means A Thousand Masks, a depth of anonymity that could lead one to wonder if even the hero himself knows who he really is. Yet this anonymous, cultural hero, not unlike the Lone Ranger, while he remains mysterious to foe and friend alike, knows himself and his chosen task as most of us can only wish we knew ourselves. They carry that secret virtue with them in the ring, but also—in films and television—they carry it into daily life, appearing in street clothes while still, incongruously, wearing their masks, to carry the battle against evil into the street, the workplace, wherever evil lurks. 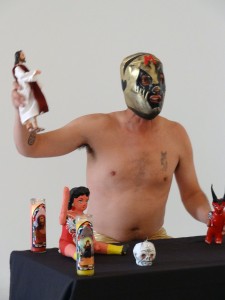 As he invokes this universal cultural epic—this could be Marvel, or the Bhagavad Gita, and of course the coincidence of numbers brings to mind Joseph Campbell’s Hero With a Thousand Faces—Jorge Rojas, from behind his colorful mask, embroiders his memoir with a second skein of personal recollection. Contemporary with this child’s rite of passage, he explains, he learned the stories of his people’s religion, and now reveals how the figures of the Savior, his nemesis Satan, and their eternal struggle became confused in his mind with the plots of Lucha Libre. Now he proposes to stage the confrontation of Jesus Christ and El Diablo as he might have witnessed it in the theater of his imagination: as a wrestling match, wherein the two narrative figures will battle in the ring, complete with the signature flying attacks identified with Lucha Libre. The prize, he announces, will be the hand of Mary Magdalene, while a skeletal Death awaits the loser.

Performance Art, as distinct from the timeless, direct performance of music, dance, theater, and so forth, came about in the twentieth century in response to observations originally made by the French artist Marcel Duchamp, the inventor of the Found Object and Installation, appropriator of other artists’ work, and the perpetrator of numerous Provocations. Central to his ideas about art was the argument that art objects like paintings and sculpture are merely artifacts of more essential events, that the real art gets lost when we enshrine residual objects in museums, and that in 50 years antique works of art have lost their power. Duchamp wanted to return our attention to the artistic act, such as the selection of the Ready Made, or acts like drawing and painting.

By the 1970s, art forms called Actions and Performances had become staples in galleries, where they were often staged during openings. Never universally popular, they often struggled to coexist with whatever else was taking place simultaneously. That, of course, became part of the theory: art should be enchanted parts of the real world, not alienated objects of reverence. Rojas, in his determination to bring Performance to his home state of Utah, revived this quality of the art by staging “Lucha Libre” during the opening party for Gods, Heroes, and Monsters, held at Elevn Gallery on Saturday, May 17th. That those attending the opening were unprepared, not to say unwilling, to have their festivities interrupted for 15 minutes of participatory theatrics in which they were cast in the role of ringside audience, added another level of meaning to Lucha Libre. Rojas, a seasoned artist, worked the crowd skillfully, first strutting and posing like a hero, then encouraging them to play along, his gestures smoothly morphing between in-character boast and the artist’s incitement to play along. The eventual outcome of the wresting match was decided by the audience’s cheers, and may change in future performances to reflect different circumstances. Whatever happens, Mil Mascaras and Lucha Libre have arrived. 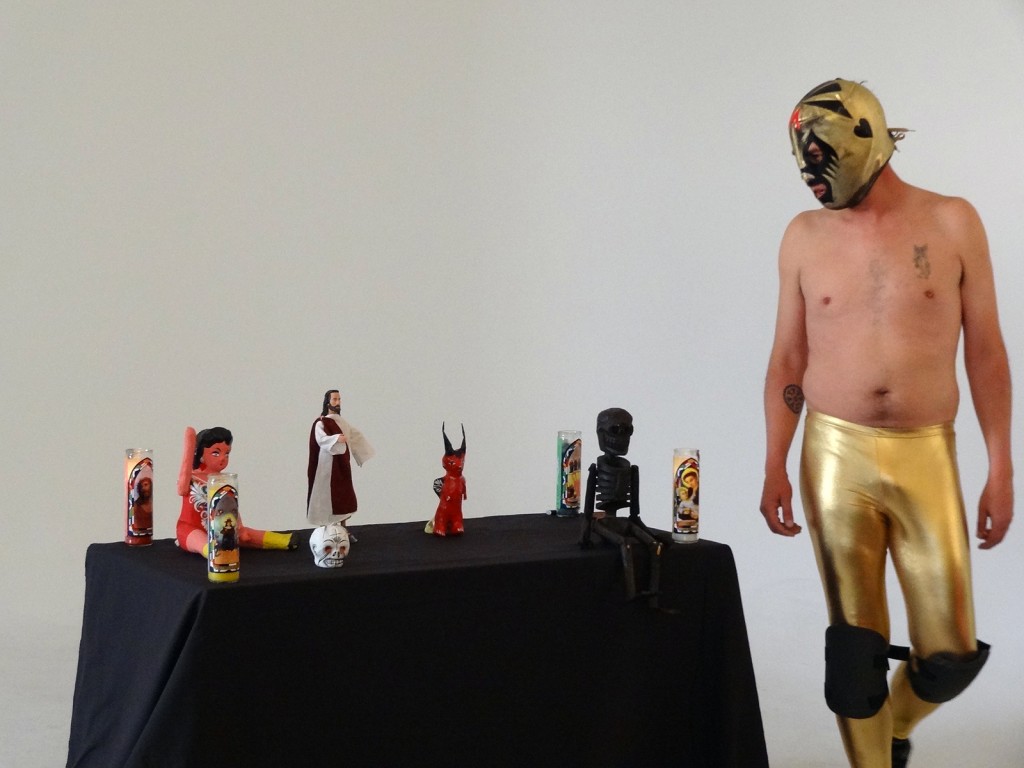