This month, we bring you a look at Dancing Earth’s new digital performance, BTW US CYBERSPACE, from Kathryn Machi, an independent dance writer who has followed the company’s work for a long time. To buy tickets to the UtahPresents presentation, November 20, click here. All photos are courtesy of Dancing Earth and Paulo J. da Rocha-Tavares. 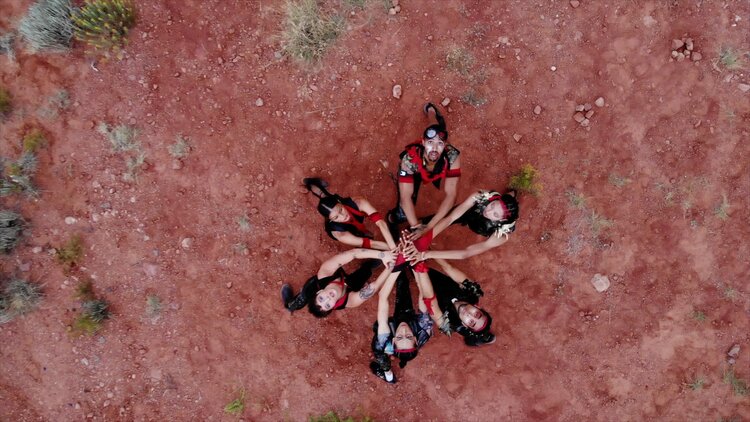 The cast of BTW US CYBERSPACE, courtesy of the company and Paulo T.

“For Native peoples around the globe, the Apocalypse arrived centuries ago. Climate Change is the symptom of something many Indigenous people have been experiencing for 500 years.”

All great artists are visionaries. Rulan Tangen, the artistic director of Contemporary Indigenous theater company, Dancing Earth, and a Kennedy Center Citizen Artist Fellow, proves the rule in BTW US CYBERSPACE, a virtual dance miniseries created in partnership with the Global Change & Sustainability Center at the University of Utah, in response to colonization, commodification, and climate crisis. Driven by the dynamic visions of young Indigenous leaders and respected Native elders, the ritual performance piece explodes antiquated stereotypes of Natives as relics of the past, fusing tradition with technology as it explores themes of repetition and renewal, genocide and healing, and ancestral knowledge and youthful activism.

In early 2019, Tangen invited Dancing Earth’s extensive Indigenous community into discussions centered on renewing collective ancestral wisdom to address and, hopefully, to avert or ameliorate the impending environmental/social apocalypse. That discussion resulted in BETWEEN UNDERGROUND AND SKYWORLD, the futuristic stage performance which was perfected first as a work-in-progress in January 2020 and set to premiere September 2020 at the newly transformed Presidio Theatre in San Francisco’s historic Presidio.

The COVID-19 lockdown disrupted that trajectory. By spring 2020, all of Dancing Earth’s slated performances had been canceled and core performers were sheltering in place across the Western United States. But with their signature innovation and flexibility, Dancing Earth quickly pivoted from devastation about what they had lost to concern for their communities and how best to serve them; what they, as artists, had to offer their people.

For Tangen, “This was, and is, movement.” She, with Dancing Earth’s Social Impact Producer and Bay Area intertribal activist Tísina Ta-till-ium Parker, realized the only way to address the catastrophe of the pandemic, to keep the performers intact, and to expand their vision would be by taking a huge leap into cyberspace. Tangen and Parker met with recent University of Austin computer/dance graduate and virtual reality designer, Azteca Sirias, founder of the Brown Collective, a transdisciplinary platform that researches Indigenous truths and experiences and, especially, the “distinctively revolutionary intersection of dance and computers.” Director, performers, and designers focus on connecting the past with the present and future, with an emphasis on resilience and self-sustainability. As Parker said about the marriage of dance and cyberspace: “The possibilities are endless.”

“We are living in the storyline of this piece. ‘Post-Apocalypse’ or maybe, right in the heart of it. My creative process has been engaging with this reality. As I film, I pray. I pray for an end to the violence against Indigenous life. I pray for a re-balancing of the human’s relationship with all of Creation.”

As an antidote to apocalyptic injustices, BTW US CYBERSPACE goes to the source to create new rituals that integrate and connect the community and others to a more balanced and mutually respectful way of living within the cosmos. The dancers, designers, and editors expand the narrative in weekly virtual group rehearsals, inhabiting, digesting, and responding to dramatic, traumatic weather patterns and social injustice events. The dancers celebrate Indigenous sustainability technology — the power of the sun, moon, constellations, and other energy sources — which designer Sirias, using avant-garde media technology, artfully and passionately weaves with current urgencies around renewable energy and resource depletion.

Improvising in their own homelands with the natural world around them, six core dancers — Dakota Camacho, Natalie Benally, Lumhe Sampson, Kayla Banks, and Raven Bright — film themselves as they enact a journey quest for ancestral wisdom, discovering the physical, social, and spiritual survival tactics of pre- and post-apocalypse. After learning and sharing their individual gifts, each quester “dreams into being” a reimagined realm of connection, integration, interdependence, and balance. Viewers of BTW US are treated to a brave new future as mesas and canyons, oil pumps and waterways, constellations and the sunrise prayers of a Havasupai elder meld with the DIY dancer-filmmakers’ embodied visions of a livable, compassionate, and redemptive future. The virtual reality miniseries BTW US CYBERSPACE begins streaming four episodes on November 5, culminating in a live, virtual performance and “Reflection Pool” with the artists on November 20. Online content, including behind-the-scenes videos for early ticket buyers, will be available through November 30. 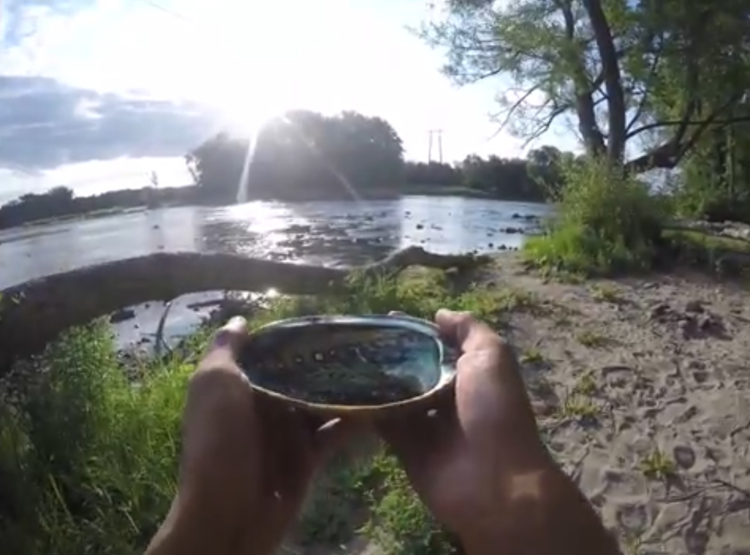 A master holistic arts practitioner, nurturing touch instructor, and erstwhile modern and Carnaval dancer, Kathryn’s stories are grounded in the arts, spirit, food, family, community, and social justice. An enrolled member of the Cherokee Nation and a dual U.S./French citizen, Kathryn has two grown children and lives with her chef husband on the foggy western edge of the City.