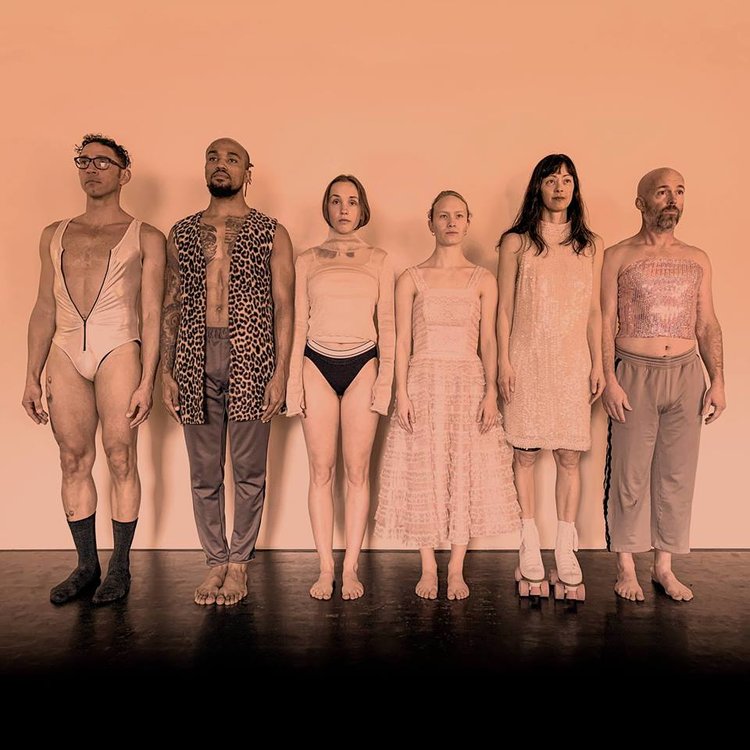 There are countless frames in this dance, walls that rearrange themselves, curtains and doors that close — a hazy story about a hotel where tall tales are told. Memories of an audition. A history lesson. Ponce de León and the Fountain of Youth. There’s definitely a heroine: Gertrudine, who wants — and maybe gets — to die because she’s reached the age of fifty and has lost her “sparkle.” Gertrudine is reanimated by all kinds of imperfect players, such as John Allen, who understands age but might not have learned any of his lines. Eliza Tappan is Gertrudine more than anyone else. She’s twenty-two or twenty-six, anything but fifty, a diva nonetheless. Juan Carlos Claudio is perhaps the most compelling Gertrudine, but she leaves you with the least information.

Visual pleasure and misdirection abound, and I keep thinking, this is a story I know, isn’t it? I am reminded of the feeling years ago, when I watched Big Dance Theater’s piece about the film Cleo from 5 to 7. I knew we were somewhere in the French New Wave, but I’d yet to see any of Agnès Varda’s films.

Throughout this collaboration between Satu Hummasti and Daniel Clifton, I keep wracking my brains for the story about a fabulous dame who wants to off herself. At one point, Tappan/Gertrudine leaves Allen for Christine Hasegawa, who roller skates impressively in Lolita’s heart-shaped glasses. Natalie Border dons a fur vest and becomes a lithe, frightened horse. My meaning-making senses gravitate toward the gender line. The three women revel in a youthful sexuality that seems haunted by the specters of age or mania. The men, who are (or appear) older, are occasionally violent but mostly just seem benignly confounded. Even when Tappan (temporarily a mother) fights with Allen (a father) for the affections of a sleeping (or dead?) baby (Border), they do so in song.

Near the beginning, Allen beats Tappan’s head against the ground in slow motion. This seems very important. Later on, the action is replayed in a different context with roles rearranged. Another salient image: Before the funeral scene, in which Bashaun Williams enjoins the deceased to say hello to Jesus, a round robin of corpses speculate on the details of Gertrudine’s demise — does she die in possession of herself, or is she slowly robbed of her faculties in a parade of indignities? We simply don’t have all of the information. The most pleasing image, and perhaps the most conventionally romantic, ends the action. The large square panels which comprise the set, brilliantly attuned to the costuming by designer Dan Evans, have been theater wings, a table, an altar. Finally, Williams and Tappan climb into a makeshift treehouse, close the door, and shut the light.

A tempest — sex, silliness, death, and jealousy — has concluded in unexpected coziness. The ends are not so neatly tied up, and I’m not sure this last image really fits. Why is she in there with Williams, who we know so little about? Is it a triumph of love over death? Or is this just another snapshot of Gertrudine’s irretrievable life and times? I feel like I’ve been on the outside of an inside joke. Maybe that’s the point.