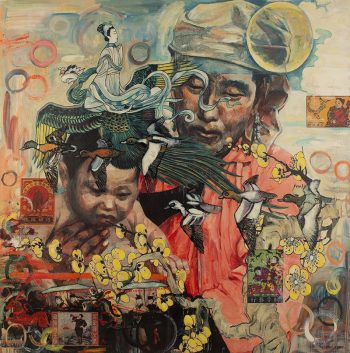 The focus of the Nora Eccles Harrison Museum of Art collection in on twentieth and twenty-first century art of the western United States. It consists of over 5,500 objects with large concentrations of paintings, sculpture, works on paper, mixed-media, ceramics, and photography. Two years after the Museum was founded the collection was established with 1800 acquisitions, a significant part of which was given by the Museum’s namesake, Nora Eccles Harrison. Since that time many purchase acquisitions have been made with Marie Eccles Caine Foundation and Kathryn C. Wanlass Foundation funds.

Looking Backward
In celebration of the opening of the Nora Eccles Harrison Museum in 1982, forty years ago, the Museum is organizing an exhibition of forty works of art from the collection. In an effort to describe the evolution of its growth, one work of art will represent each year of the past forty years of the collection acquisitions.

Artists included in this part of the exhibition are the following.

Looking Forward
George C. Wanlass, the great-nephew of NEHMA’s namesake, Nora Eccles Harrison, has carefully purchased work for the Museum through the Marie Eccles Caine Foundation and the Kathryn C. Wanlass Foundation for thirty-six years. Concurrently, he built his own collection which today numbers over 700 works of art. Formed in a parallel time frame and from similar sources and interests, the two collections reinforce each other and can be thought of as two sides of the same coin.

The first work of art that George C. Wanlass purchased through the Marie Eccles Caine Foundation was the Mahonri Young bronze sculpture Right to the Jaw, 1926. That gift was made in 1985, one year after the Museum’s collection began. Having been collecting since 1973, Wanlass, who studied history at Amherst College, the University of Kansas and Stanford University, started out with an interest in the early art of Utah, an area that he recognized as being seriously underappreciated. In Young’s work, Wanlass saw the strivings of an artist with modernist leanings, and Wanlass proceeded to acquire a number of his works, including what the artist thought of as his first “Impressionist” painting. Nine of Young’s works of art that Wanlass acquired are in the Looking Forward component of this two-part exhibition. Although already part of the NEHMA collection, Right to the Jaw will also be included in the show.

This part of the exhibition consists of 36 pieces by the following twenty early Utah artists.

Through Mr. Wanlass’ plans to gift his collection to the museum, adding these works by early Utah artists to the Museum’s collection will greatly enhance the Museum’s holdings from this period. In the context of Wanlass’ collection, however, they are a small component of a much larger collection that chronicles art history of the Western United States over the last 120 years.