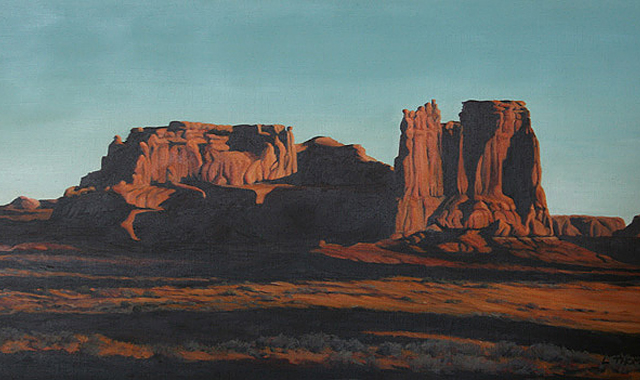 One of the great transgressions of art history occurred when Marcel Duchamp drew a mustache on a picture of the Mona Lisa. An artwork is usually seen as an extension of the artist who made it, and later modification is widely regarded as a violation of the integrity of both artist and work. Among their many friends, the husband-and-wife team of Mark Knudsen and Leslie Thomas practice a somewhat more relaxed approach. This year, employing skills he developed as an illustrator whose drawings frequently appeared in the Salt Lake Tribune, Mark created the couple’s Christmas card by adding a decorated fir tree to one of Leslie’s astonishingly precise desert landscapes. They also fondly recall friends who have tracked down identifiable locations in Mark’s panoramic vistas, then photographed the same scene and sent along the picture, paying a compliment to his accuracy while playfully inserting themselves into his CV. But studying the work they have assembled for their upcoming show, one thing quickly becomes apparent: Knudsen and Thomas may have fun with trivialities surrounding their art, but when it comes to the paintings themselves, they focus exceptional skill and control on making sure each painting delivers exactly the rock-solid experience their admirers have come to expect.

Landscape is both an important and a popular part of Utah’s artistic mainstream. Two extreme exhibition concepts demonstrate its range: in one, a single artist displays images of multiple places, or, like Monet’s haystacks, multiple images of one place. In the other, several (or as many as 30) artists take turns depicting a single, well-known subject. Such exhibits show off the wide variety of strategies that have been taken in the search by artists to distinguish themselves, among which every so-far conceivable approach has been taken. In one dimension, faithfulness to place, time of day, weather, and point of view generate endless variety. Then the by-now-familiar spectrum of abstraction adds an element of self-awareness to the viewer’s experience: Koichi Yamamoto’s choice to draw rock formations with an ink roller emphasizes their structural appeal to the mind (see our blog), while Carl Purcell’s painstaking attention to sunlight-struck color stimulates a spiritual response. Either flavor of the majestic finds its own audience.

Medium is crucial to the equation. Leslie Thomas works primarily in oils, allowing her to model the shapes and textures of her subjects. Rock and sand take on not just the illusion of three dimensions, but the sensuous feel of surfaces the viewer’s mental hand can caress. Her actual surfaces, meanwhile, are thick and textured, adding to the sense of touch. Mark Knudsen prefers to work in acrylics, a water-based paint that he applies like classical glazes, so thin that the texture of the support remains visible. Unlike his painting partner’s gradual transitions, he favors strong contrasts: direct light vs deep shadow, soft red rock vs hard white sandstone, exposed scarf vs scarred desert varnish. Each of them also tackles one of the ironbound rules of their genre: the landscape format. Thomas often works in a nearly square space, moving the subject of her gaze in the direction of a portrait from nature or even a still-life. Knudsen, on the other hand, expands the horizontal dimension until his vistas require not just the flicker of the eye, but the entire head to swivel. It’s not just optical realism, but physiological presence.

Each viewer will respond uniquely to what any given artist has chosen from this panoply. Connoisseurs might seek out a unified surface, balanced composition, and demonstrations of control. Rock climbers, on the other hand, may respond to a risky sense of being on the edge. Recognizable places and familiar presentations will please others. Mark Knudsen displays a virtue few among the many hundreds of local painters, well-known or obscure, have taken to, but which should be more welcome. Most modern landscape artists strip the human presence from their work. At its inception—landscape isn’t an old art, but in fact the most recent major genre in art history—painters like Claude Lorraine and Thomas Cole made a point of projecting people into their scenes, either to ally their work with previous genres, like history painting, or to lend a sense of scale. Once established, though, landscape found its niche in the ideal. Today, landscapes conventionally show us a place before trees were cut, or roads and cities built. Or it may reassure its audience that such places still exist, elsewhere. Ruins suggest that the natural world can still return. The last thing anyone, except perhaps a certain kind of environmental activist, expects to see on a calendar, or a gallery wall, is a splendid mountain vista before which runs a string of power poles and wires, or the geometric scar of a freeway overpass. Yet therein lies precisely the insight that Knudsen characteristically brings to his vision of the West.

Let’s face it: none of us will ever see what the one-armed John Wesley Powell saw when he ventured down the Grand Canyon. We are equally unlikely to be the first human ever to enter a wilderness, and were we given the chance, a good argument could be made that we should, however regretfully, decline. The reality is that we see much of the landscape through a car window, from a trail, or looking past some human artifact. Mark Knudsen wants us to acknowledge that, but he wants to do something far greater. He wants to educate our eyes so that we see more clearly. We need to learn to see nature and our own presence together: to preserve what we can of the encounter and, as much as possible, simultaneously, to perceive the human as a part of the entirely of nature. To this end, Knudsen as artist travels along the border, and his witty collisions of the spectacular with the mundane are not just pictorial diversions. In their humor lies the truth of our condition, of who we are and why we need to think about what we do. And for those who find it difficult to feel kinship with concrete and metal intrusions, there is relief in learning to see how the beauty inherent in these materials can coexist with that of rock and sky.

There is something else Knudsen does, and here Leslie Thomas joins him. The plethora of spectacular and majestic spots scattered across the vast western lands has led us to expect these grandiose elements in our art. But the universe is just as present in a grain of sand, or here, in a patch of sand littered with eroded boulders and bits of the living desert’s flotsam. We may travel through mile after mile of natural wonders, without looking at them, on our way to a national park, or traverse a spider web of water-carved features on the drive to Lake Powell. In their paintings, this happy couple invites us to slow down and actually look around us. Fans of Robert Smithson revere his attention to the mud flats around the Great Salt Lake, as though he invented and owns the patent on them. But Knudsen and Thomas have painted those too, and many other un-celebrated miracles: unique places that reward the deliberate gaze with a sense of the infinite and infinitely variable cosmos wherein we dwell. 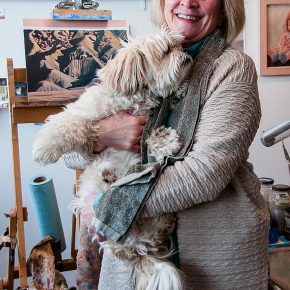 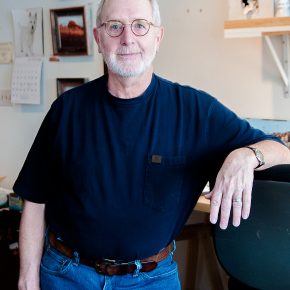 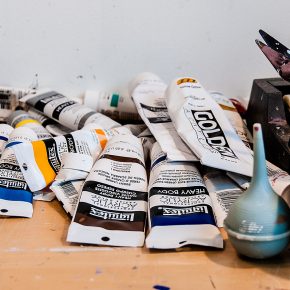 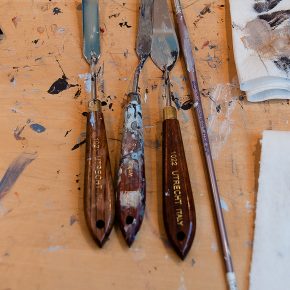 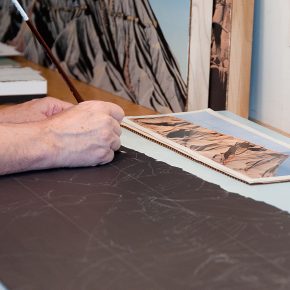 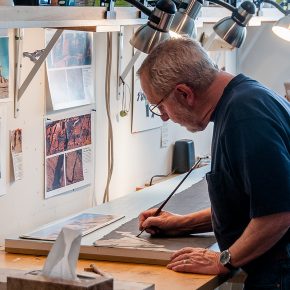 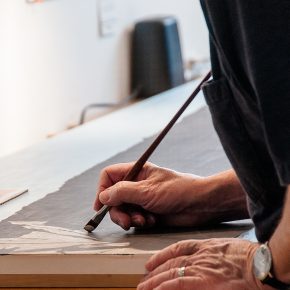 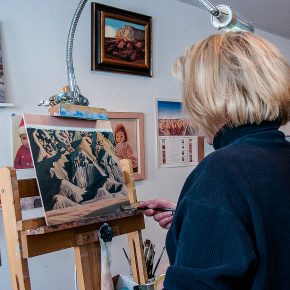 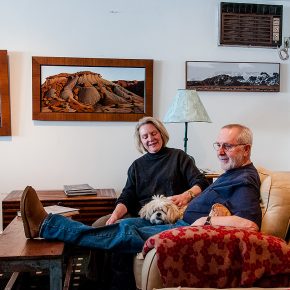 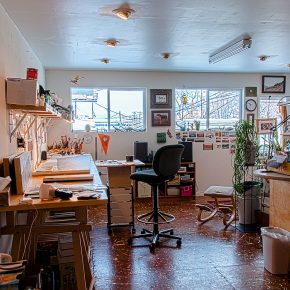 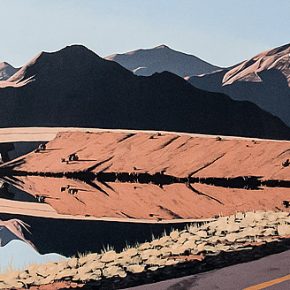 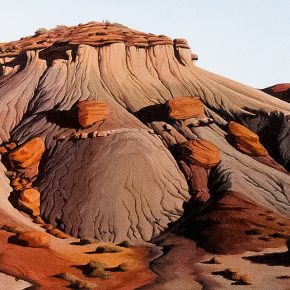 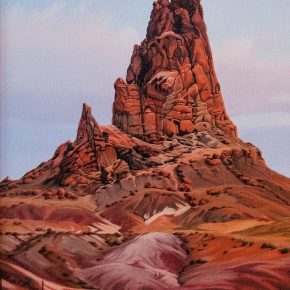 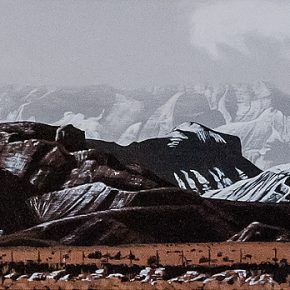 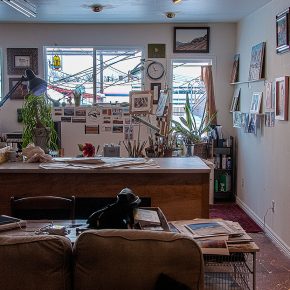 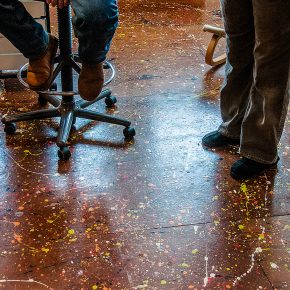 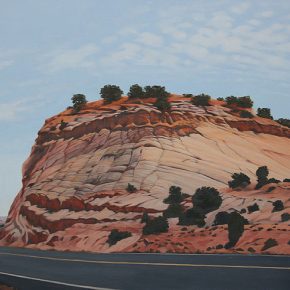 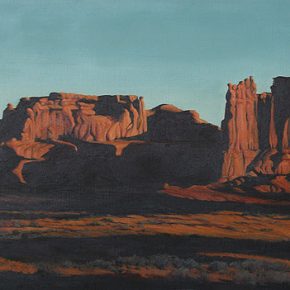 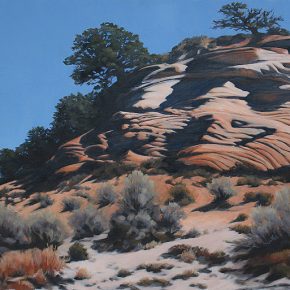 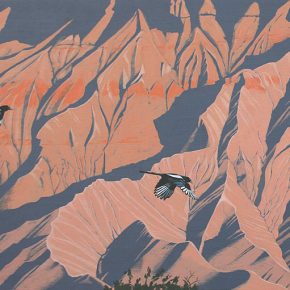 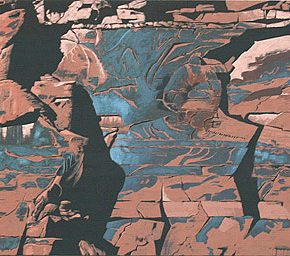 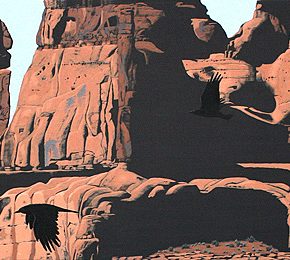