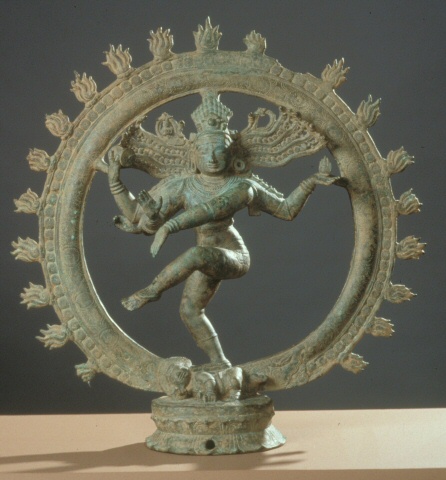 The Asian collection on the museum’s second floor houses treasured Hindu and Buddhist objects. Shiva Nataraja—Lord of the Dance—greets me and other museum guests as we step into the gallery from the northeast corridor. This 11th-12th century cast bronze sculpture is a gem indeed. It was gifted to the museum in 2001 by the Christensen Fund to commemorate E. Frank Sanguinetti’s 84th birthday.

The Shiva stands 27-inches high in his Nataraja manifestation, and embodies the creation and destruction of the cosmos (symbolized by the prabha-mandala, or ring of fire, in which he stands). Each of his four arms represents a cardinal direction, and he stands triumphant with his right foot atop the prostrate dwarf, Apasmara Purusha, the demon of ignorance and illusion. His left leg is raised in the air, bent at the knee, as he forcefully, yet gracefully, pivots to his right, propelling himself in a clockwise direction.

Each of Shiva Nataraja’s rotations takes hundreds of thousands of years. He fills his lungs with the fiery wind of his fierce spinning (ignited by the ball of flame thrown from his upper left hand), and he destroys the universe (a horrific deed by such a beautiful and graceful deity). In the next millennia-long revolution, he exhales ash from the universe he just annihilated. And, with the beating drum held in his upper right hand, its rhythm and pulsating sound of AUM from which all life and languages emerge, he gives birth to new and vast creations that feed on the extinguished inferno’s nutritious cinders—a manifestation of endless cycles of birth, death, and rebirth.

The King of the Cosmic Dance, with lower left arm outstretched, points his hand towards his upraised left foot as a gesture to the release, or annihilation, of material bondage and the destruction of our imperfections, bad habits, and self-defeating attachments. Once overcome, a new creation emerges, a transformed universe of beauty and wonder in which divine qualities in each person are restored and opportunities for joy, peace, knowledge, and spiritual advancement are universally available.

“Every subatomic particle not only performs an energy dance, but also is an energy dance; a pulsating process of creation and destruction. The dance of Shiva is the dancing universe, the ceaseless flow of energy going through an infinite variety of patterns that melt into one another. For the modern physicists, then, Shiva’s dance is the dance of subatomic matter…a continual dance of creation and destruction involving the whole cosmos; the basis of all existence and of all natural phenomenon.” (Fritjof Capra, The Tao of Physics: An Exploration of the Parallels Between Modern Physics and Eastern Mysticism, pp. 241-245).

Shiva Nataraja’s dance is a poignant jig meant to focus our attention to the issues of our time. Are we not in the dark age of Kali Yuga? If so, it should be about time for the “rejuvenation,” or Golden Age cycle of Shiva’s cosmic reel to kick in, and we’re all invited to be joyous and dance in the ring of fire.