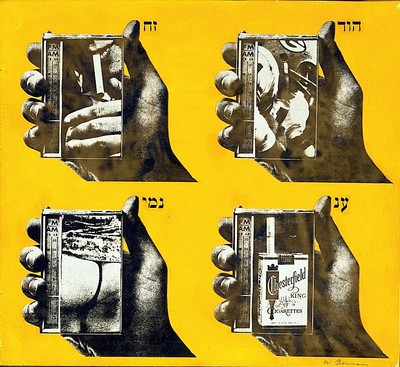 For the next six weeks, the Nora Eccles Harrison Museum of Art will transport you to the counter-culture of the 1950s and 60s beat generation. The Museum, located on the Utah State University campus in Logan, is hosting the traveling exhibit Semina Culture: Wallace Berman and His Circle through the middle of March.

Wallace Berman was a photographer, writer, publisher and visual artist based in California. Berman’s creative energies served as a gravitational force that pulled into its orbit an eccentric group of musicians, writers and artists. This exhibit originated with the Santa Monica Museum of Art and was organized by writers and independent curators Michael Duncan and Kristine McKenna. It culls artwork, letters and photography from Berman’s personal collection as well as the works of the creative people who gravitated to Berman during the years of the Beat generation.

“Wallace Berman was a catalyst and inspirational mentor, carrying the ideas and ideals of one group of people to another as he moved through a wide spectrum of creative, social and political circles during the fifties and sixties in southern California,” said Victoria Rowe, NEH museum director. Berman is best known for the publication of Semina, a hand-printed, free-form art and poetry journal that Berman published and personally distributed in editions of only a few hundred. The exhibit features the complete leaf-loose run of the publication, nine issues from 1955 to 1964. Semina introduced visual and poetic voices of a radical nature in the post-war years.

Berman was an avid photographer and many of his works are collage-based, incorporating his own and pop images as well as imagery from Jewish mysticism. He helped pioneer the use of the verifax (an early photocopying machine) in collage. Some of the most poignant pieces in the exhibtion are letters to or from Berman which incorporate collage into the epistles, thus demonstrating the personal, immediate and descriptive quality of the artform.

In conjunction with this exhibition, the NEH will feature the newest installation of Allen Ruppersberg, a professor at UCLA. When Ruppersberg discovered that his students had never heard of Allen Gibsber’s Howl, he conceived The Singing Posters as a way to introduce that important work to a new generation. For the installation Ruppersberg translated the poem into phonetic spellings and reintegrated them into the original text. The “new” text is printed on approximately 200 vibrantly colored commercial advertising posters installed floor to ceiling on the gallery walls.

This article originally appeared in the February 2006 edition of 15 Bytes.