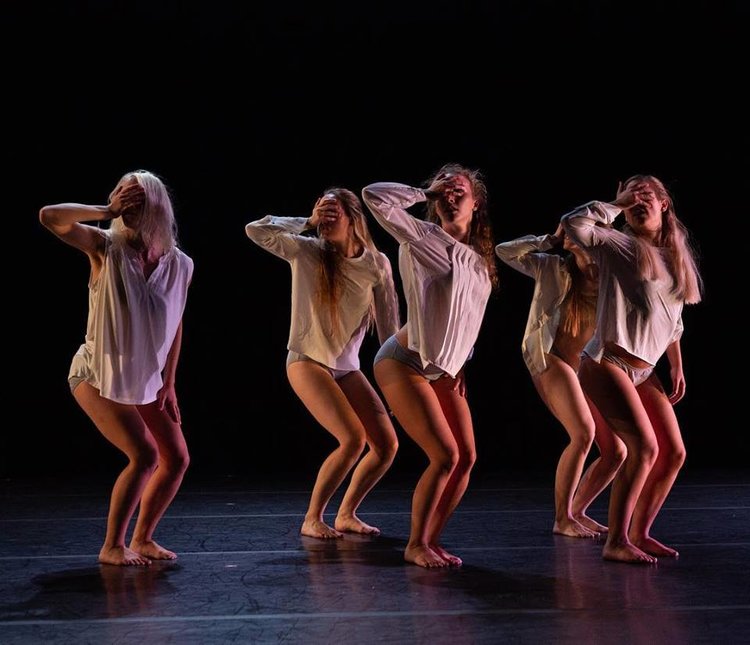 Dancers in Dan Higgins’ “Asylum” as a part of Brine’s Na. Photo by Paul Montano, lighting by William Peterson.

Now in its fourth year, Brine was created by Symmer Andrews, Ashley Creek, and Sara Pickett to highlight works by numerous local choreographers. This year, the group’s annual fall offering featured two distinct programs with sold-out performances, Na (the symbol for sodium) and Cl (chloride) (this reviewer was only able to attend Na).

The opening number, “Parched,” was choreographed by Daniel Do and Edromar Undag in collaboration with their dancers. A potent piece, “Parched” created a sense of torment, yet not without end. The spoken word artist Nia Portocarrero was forceful and compelling in her tone and delivery, and even without really understanding the words that were spoken, one still absorbed the intent. The diverse bodies on stage, in turn yearning and yielding, hoping and striving, and coping with support, were decidedly interesting to watch. The lighting by William Peterson was simply brilliant, with blue and amber cross beams of light leading the gaze into a mysterious land, in which threats of darkness and glimmers of hope could coexist with equal chance.

“Guardians of the Hearth” by Emily Bokinskie was a blander number with an aesthetic dance arrangement, illustrating women as perhaps gentle yet strong keepers of warmth and tenderness. The dancers looked lovely in pinks and reds and greens, the overall palette pink as they twirled and stretched around in circles and lines. My interpretation possibly takes a cue from the title, but the intent of the choreography on its own was less clear.

The next piece, “Asylum” by Dan Higgins, was absorbing and yet difficult to watch. The dance opened and closed to a scene of five women who stood tethered to an invisible track in the ceiling, accompanied by the sound of ropes stretching as they struggled valiantly to escape, all within a diagonal track of light. (In this piece, as in “Parched,” the concept was very ably assisted by the lighting.) As they tried to break through but fell again and again, I could almost feel their bruises, both of their physical bodies and also of their spirits. Was this a prison? Was it of their own making? Were they helping each other or holding each other back? It was all a bit ambiguous. Every struggle in “Asylum” felt lonely and hopeless.

“A Walk in the Rain” by Heather Francis was an unexpectedly humorous piece, the dancers playfully exploring a pull toward conformity. Like sea lions yapping until others joined in, the dancers repeated phrases until all were engaged in the colloquy, effectively drawing the arc of an evolving indulgence from the individual to the collective, from the unique to the commonplace. It was a rare use of lighthearted wit and hilarity to entertain and stimulate. It was also interesting to see the forceful pull of one strong individual then co-opt the acquiescence of the others.

The next piece, “Saudade,” was choreographed by E’lise Marie Jumes. A Portuguese word, saudade evokes a sense of loneliness, incompleteness, or, as noted in the program: “the pleasures we suffer and ailments we enjoy; this is our longing for what is not the present, …layers upon layers of our past experiences give life to the palimpsest of our existence.” Mounds of hair surrounded the dancers, as they appeared to experience a poignant longing. The nostalgia was effectively embodied in their movements, the hair perhaps a symbol of what they had lost. And yet… it grows back, does it not? “Saudade” was an introspective piece, in which each dancer was ensconced in her own memories and a dreamy wistfulness.

“Ash/Salt,” choreographed by Corinne Lohner, opened to two women sitting in front of an elaborately arranged meal on the ground, as a third woman on the other side of the stage struggled incessantly, yet vainly, to move against an invisible barrier, locked in an eternal, undesirable fate. The other two dancers seemed to eat and drink in turns, while one cut the other’s hair (a wig), dyed portions of it black, and, later, both proceeded to smear their mouths in the same substance. These were two separate, detached happenings, perhaps illustrating the impersonality of existence, or a lack of empathy: the two women indulging in their meal were seemingly completely oblivious to the struggle of the other woman, just across from them. The piece was jarring at times, but still kept the viewer hooked, in a strangely vicarious, voyeuristic fashion. And what did the dark smearing signify?

“Your Light Is Never Forgotten” by Alicia Trump was as compelling a number as her piece in last year’s Brine concert, “Gaslighting Blatherskites,” and was an aching reminder that grief and loss are negotiated with every day, long past the event of loss. In myriad covert and conspicuous interactions, the absence of a loved one became evident as their essence was acutely highlighted. That graceful acknowledgment was skillfully portrayed with a spotlight under which one dancer stood. When she fell, the others continued to simulate her essence, dancing around the light that was once hers, not fully extinguished even when she no longer danced under it.

“Good Enough” by Megan O’Brien featured a cast of four women, some dancing, some observing. They prompted several questions, among which were: What do we find surprising? What do we find acceptable? How hard is it to reveal self-truths, and how do you resolve the feeling of not being good enough? The costumes, everyday clothing such as suits and the like, were aptly chosen, bringing home the situational realism in a relatable manner.

Taken in its entirety, the pieces throughout Na were all thought provoking. However, individual sections needed more finesse in their abstractions, which did not always drive home points with conviction. Last year’s Brine concert, Disembodied We, was possibly more exciting and mature. Watching this year’s, I was struck by the thought of a compulsion to find meaning through my own constructions. Did a narrative exist that was a version just for me and my constructions, or was there maybe even none at all? In stark contrast to the Indian classical arts, where there is an explicit intent to provide common meaning and contextual narrative, the aesthetic experience here was secondary to the intellectual and emotional one. Perhaps that was the intent, or perhaps it does not really matter.