After navigating the Ramp of Doom, you’ll be faced with the Beams of Peril! Survive that and be tested by the Balancing Ball of Fright! Lucky enough to live through that? Well, try making a perfect landing after experiencing the Ring of Fire!

This maniacal rant comes from Part 2 of D. Bradford Gambles’ five-part zine-style mini-comic Shred or Dead, where it erupts from the mouth of The Ringmaster, a pint-sized terrorist whose cheerful grin is all that can be seen of his face below an enormous top hat, and whose threats in turn baffle his skeptical victims until they realize they can’t just skate around him and his Circus. The Ringmaster’s prey, the crew at the center of this epic quest, are the protagonists of five cumulative adventures, wherein they must battle a variety of antagonists over a wide array of boarding challenges, all while seeking a way across Claris Hills, USA (variously “The absolute capital of skate culture” and “The absolute capital of chaos and lawlessness”) to get back to their home turf, from which they were displaced by Radical Tim and the Too Cool Crew, a more leveled-up bunch of kids and their awesome leader. 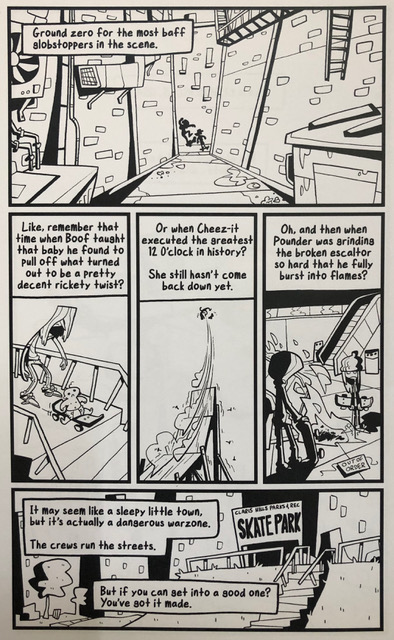 Technically, Shred or Dead is a digest size (5 1/2” by 8 1/2”) book with five separate parts, in black and white with 24 to 44 pages (depending on the part) and multi-color Risograph covers. The parts come wrapped separately in clear protective wrappers, complete with Stickers, and all five are available together, bound by a sleeve on which is stamped a skateboard that reads “Thank U.” The history of Shred or Dead includes a kickstarted campaign in 2021, complete with a video. In a welcome gesture, the comic is family-friendly by all the measures important to blue noses (the hardest word is “garf”), which only makes sense given that the genre belongs first and foremost to kids, and there is already enough adult entertainment passing itself off as “for all ages” available elsewhere. Besides, it’s plenty subversive on a level the censors probably don’t get.

The creator of Shred or Dead, known to his fans as Brady, describes his baby as “about the insane, X-treme and dangerous world of skate culture written by someone who knows nothing about it and did almost no research (me).’”Just as Neo, the new guy, was clearly the star of The Matrix, so Sam (aka Noob – Age 10, She/Her), the newest wannabe member of the crew, is central to Shred or Dead. In the satirical sub-voice the crew shares with Brady, there are plenty of facetious comments about this, wondering if she is “the One” and so forth. Her companions, who challenge her until she proves herself to them, then come to count on her, include Glasses (Age 9, Him/Him) and the enigmatic Squee (Age ?, ?/??). Before Noob can even complete her first test, they are expelled from Claris Hills and must decide whether to make do with whatever abandoned landscape they can find to skate on, or find their way back to their own territory while leveling up enough to face their nemeses. Obstacles to avoid include an other-worldly “lawman” — authorities being forever the enemies of skateboarders, rollerbladers, and the various denizens of their world — and the rightful and returning occupants of the places where they choose to show off.

The five component parts, like so many TV episodes, are both independent adventures and parts of an over-arching narrative, though truth be told, it may not seem all that important when the last adventure ends that they have reached their goal. The drawing and printing are sharp, energetic, and full of action that is suitably challenging to the visual imagination — sometimes requiring a bit of study to realize just how good it is — and since the art is cartoon-style and doesn’t attempt cinematic realism, there are none of those annoying passages where the special effects or CGI glitch or falter. (Are you listening, Marvel?) In fact, for those who enjoy and even prefer reading, with its multiple mental channels that put the consumer in charge, this is a very satisfactory way to spend some time in a narrative that uses the imagination as much as it feeds the hungry eyeballs.

We picked up our copy of Shred or Dead at Watchtower Coffee & Comics in Salt Lake City, 1588 South Main Street.