Two years ago, in an exhibition at the Central Utah Art Center (see September 2006), Stefanie Dykes showed a pair of architectural fantasies: ornamental woodblock prints combining the flat perspective of diagrams with animated details and figures cavorting in space. Standing before these large prints (each 3 feet high and 2 feet wide), the artist explained that they were the beginning of her next project. An artist who pushes against every perceived limit of printmaking, including the maximum practical size of paper and press, Dykes was determined to continue creating linked pieces of this puzzle until they coalesced into a cathedral large enough that, standing before it, she could feel herself moving through it. Her choice of Gothic style was appropriate because the time-lapse quality of the original edifices, accumulated over lifetimes, would become a metaphor for her intention to let the project, with a two-year deadline for completion, become an “epiphany,” or manifestation, of events in her life during its construction. 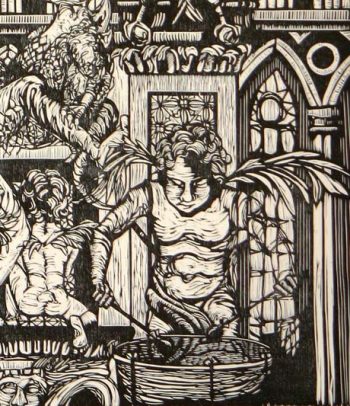 So it took time to complete this “gothic cathedral of the mind.” First, there is a stupefying amount of complex, hand-cut detail in each of ten panels. One of the artist’s friends, referring to the daunting idea of intricately carving what turned out to be sixty square feet of birch plywood, quipped that she is “just crazy enough to use a blade one millimeter wide to make a twenty-foot print.” At the same time, the life it was to illuminate made demands on her as wife, mother, teacher, partner of SaltGrass Printmakers, professional artist, and member of an international printmaking community. Then, because she knows the value of deadlines, Dykes committed to showing the finished work in Nebraska in October, 2007. By the time it returned, it had become her past: a ball and chain around the ankle of someone itching to move on. So only now will this mythical monument finally see local daylight in the town where it was born.

A print the size of an Abstract-Expressionist painting raises questions about what constitutes a print. In an age that confuses mechanical reproductions with original works in which multiple iteration is part of the initial plan; where Giclée (high class inkjet) copies, sometimes touched up by hired hands are marketed with minimal participation by the artist — it would help if the language could be modified so that merely being printed did not qualify the resultant copy as “a print.” Newspapers are produced by lithography, a demanding technique used by artists, yet no one calls a newspaper a print. We recognize it as an ephemeral, inherently non-valuable object. Other than limiting an edition to a relatively small number of copies, just what makes a print a valid, and valuable, work of art?

The answer lies in the conception, and two recent developments, both employed by Stefanie Dykes, lend some perspective. One comes directly from the fundamental fact of printmaking: reproduction requires a template, a matrix that makes multiple, close-to-identical copies quick and economical. It was this quality, in tandem with the need for devotional images that were liberated from Church control, that first made prints popular during the Reformation. Only much later did artists realize that while the matrix is necessary, it needn’t completely control the work. Dykes can make twenty identical copies from the matrix, or she can make twenty variations on it.

The other, more revolutionary (and for some more alarming) development concerns the voice of the print. Over centuries, the many solutions developed in response to the necessity of a matrix have given prints a distinctive visual vocabulary. Consider one example: in the beginning, illustrations were monochromatic, limiting their realism and legibility. One solution was to print a black outline, which could be filled with color by assistants with no more skill than a child needs to fill in a coloring book. Circumstances have changed completely; it is now far cheaper to make a full-color illustration than to pay someone to paint in colors. Yet the filled-in outline is still with us, a staple of graphic design. Numerous artists in many mediums have adopted the conventions of printmaking, either to create the look of a reproduction, or for their own aesthetic virtues. All that was required for the circle to be complete was for a printmaker to reproduce those conventions by the seemingly extravagant expedient of pulling only one print from her matrix. 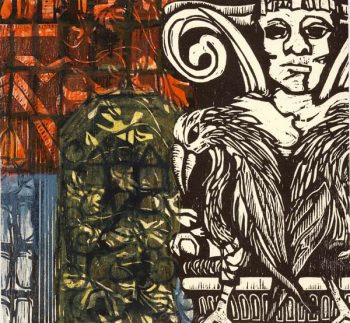 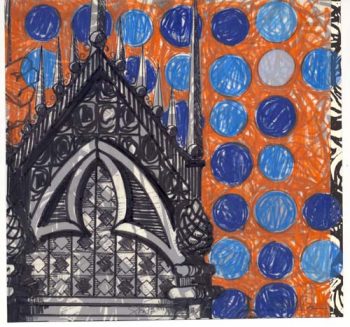 This is exactly what Dykes has done with her Cathedral. Although portions exist as fragments, only one complete copy exists. There can never be more, because she cut up the plywood matrices and fashioned them into boxes: reliquaries made from the holy bones they would contain. She cut partial copies — pulling a three-foot print can never be a sure thing — into nine-inch squares, which she carried with her during the project, hand-coloring them and labeling them with the names of places she traveled. These, too, she calls relics, a selection of which hang on the wall opposite the Cathedral.

While some consider destroying the woodblocks scarcely above vandalism, for Dykes it was appropriate, even necessary. One moment she says, a bit mysteriously, “All it asked to be was one.” Then she explains that she is about to enroll in the U of U’s MFA program, and she needs “to clean the palate. The easy thing is to re-use, to think Oh, I’ve got that matrix in the basement.” While not opposed on principle to such recycling of images, she has witnessed how pulling images from a repertoire can allow an artist to avoid moving forward. So out it goes. 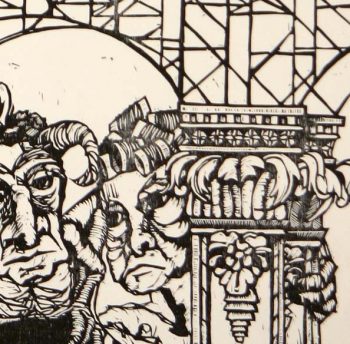 Those who know Dykes skillful, sophisticated, and accessible style will find reminders of her repertoire in the Cathedral. Whether it’s a troll wearing hair curlers or an angel playing kettle–drums instead of a harp, her humor leavens topics running to mortality, salvation, and how much we can help others and how much we must do ourselves. Dykes layers her themes, including her personal narrative and reflections, so that more personal elements are represented by details reached only upon encountering broader, more universal themes that are found in the bigger picture. She accepts that art is a three-way conversation involving her, the work, and the audience, but counters, “I can’t control what they bring to it. I poured it all out and now they get to do it in reverse.”

There is plenty to reward time spent in the Cathedral. If present, the artist will share some of the stories that contributed to its final form, though she warns, “Once it starts it’s going to take a while.” But content aside, to let an artist dictate what a work means is to diminish it. Better to wander, as anyone must that wants to truly know a building, around the exterior and through the interior. Ponder why two portals. Consider the resemblance between the stained glass Madonna and Child and the branches growing across it. A tour might well begin on the left, where totemic figures wrestle with the structure. They could be demons and angels, or wind and gravity. At the other side an actual bridge emerges from this metaphorical one. In between, a baptismal font shares its water with a fountain and a birdbath. Decorative details interact with the denizens of the place, as they should. Visual pleasure alone makes the trip worthwhile, but there are revelations, too, hidden like Easter eggs in an architectural garden. Finding them brings another level of accomplishment, satisfaction, and cerebral pleasure. 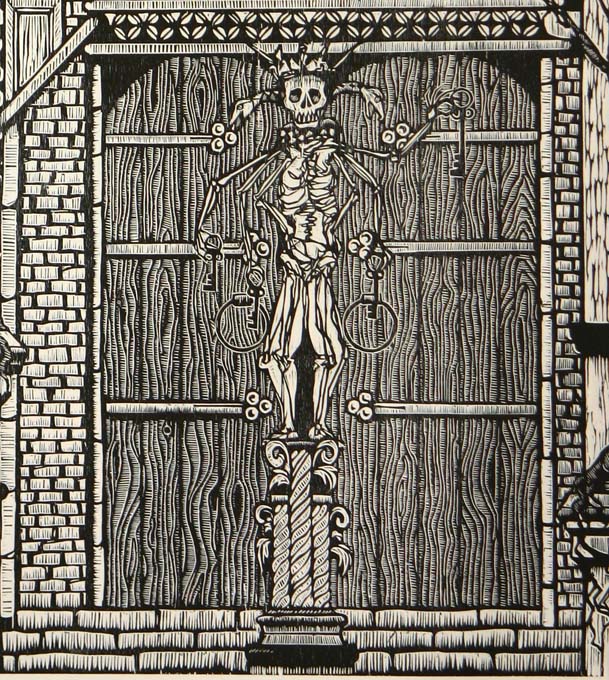 Cathedral as well as related pieces and reliquary boxes, will be at the Finch Lane Gallery June 5 through July 26, with an opening reception June 6, 6 to 9 p.m. Showing concurrently at the gallery is an exhibit of photographs by Marnae Rathke (see page 8).