Literary Gift Guide: Books to Fish, Pray and Cut Your Fingers By 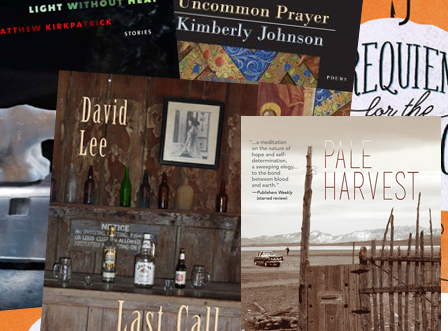 In its second year of regularly covering literary fiction, nonfiction and poetry, 15 Bytes cast its net broadly. The magazine and blog reviewed works by Utah and Mountain West authors, as well as books that had a particular relevance to Utah and Western audiences. It also experimented with its first “inverted interview” in which, during the Utah Humanities Book Festival, it fielded questions from an author (in this case Anthony Doerr) to book group readers of his novel All the Light We Cannot See, which has since been short-listed for the National Book Award.

In addition to the 2nd annual 15 Bytes Book Awards, all of which come highly recommended for gift-giving, our gift guide below is only emblematic of the scope and quality of work celebrated in the pages and posts of 15 Bytes during the past year.

A finalist for last year’s 15 Bytes Book Awards, Matthew Kirkpatrick’s debut book of experimental fiction Light Without Heat has stories or “pieces” that “flash and flare into conscious and subconscious space,” according to our reviewer Aaron Cance. “[I]t’s all Kirkpatrick’s readers can do to remember the outlines of the narrative images of each burst of light, like a long series of photographic still shots blasting away, generating metanymic associations  and unspoken, unwritten truths.” Cance concludes that Kirkpatrick lights the way for readers, and “…has led them into the creative space of narrative responsibility, has invited us all to ‘kneel, gather the pieces and cut our fingers.’”

Critic and fiction writer Larry Menlove saw David Lee’s latest collection of poetry, Last Call (WingsPress) as if it were “an afternoon at an old watering hole with your buddies elbowed up all along the whiskey-stained oak, heels hooked in the bar foot rest, and the former poet laureate of Utah, Mr. Lee himself, serving up the day’s oratory libations.”  Continues Menlove, “These poems tell a story in sun-struck verse that is irreverent, ribald, and elegant. Words in the vernacular like “oncet” and “twicet” and “wegn” pepper the lines and flavor the world of Garza County [Texas].” And yet in the title poem “Lee lets us not forget in the end that life is short and good honest friendship and admiration for lost friends can inspire verse that hums with perfect pleasure like a prairie wind through taut-strung bailing wire….”

In another book of poems, markedly different but just as luminous as Lee’s, poet Michael Sowder remarks that Kimberly Johnson’s Uncommon Prayer (Persea Books) is “a stunning collection of lyrics—sonnets, prayers, poems of praise, laments, monologues, prose poems—which gives voice to personal and universal themes of faith—religious and secular, serious and ironic, traditional and contemporary.” This is Johnson’s third book of poetry and Sowder says of it that while “most contemporary American poems of faith stumble over a perceived ironic imperative, a fear of honesty that defeats them at the gate…Johnson leaps that hurdle with grace, learning, and sophisticated wit. Reading these poems is a delight and an inspiration. We listen, privileged to be in intimate attendance to a voice speaking at the door of God.”

A different kind of religion is evident in Jeff Metcalf’s Requiem for the Living: a memoir (University of Utah Press). Our reviewer, fiction writer Lynn Kilpatrick, writes: “What Metcalf does here is display, reflect on, even question the stories that comprise a life. What he attempts to do, with the set up, with the ordering, with the shaping, is to give us an arc of a life, an arc of a born storyteller….In the best of these essays, Metcalf’s storytelling prowess combines perfectly with his skill as a poet. ‘Bone Deep,’ an essay about fly-fishing and cancer, concludes, ‘[w]hen I catch a plump trout, I name it for one of my brothers and release it back into the wild where it disappears into the sacred and holy waters of my home water.’ …These essays reward readers with the forward progression of narrative, and the momentary stillnesses of beautiful language.”

Finally, this year, out of Cache Valley, came the debut novel, Pale Harvest, by Braden Hepner (Torrey House Press). Reviewer Larry Menlove exulted in the rich and moody language that underscores the story of stagnant but yearning dairy farmer Jack Selvedge, stuck in a town that, if it isn’t dead, is surely dying. “[S]ubtly, slowly,” writes Menlove, “like a rider on horseback, Hepner takes us on a journey along with the broken, shit-begrimed souls of this small town. Until finally, just maybe, someone dares to leave and drive a truck into a night full of stars. Someone who looks up to see new light below the southern horizon where, ‘The earth glowed as though it harbored an inner fire of its own, as though it were about to be reborn.’”