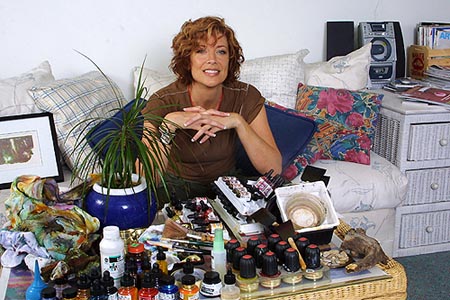 Often when meeting an artist in their studio, on their own turf, a viewer arrives with preconceived notions. But, when visiting Lisa Scopes Oliver in her Bountiful studio, to assume that one will view the average paintings, or have an ordinary conversation regarding paints, brushes and techniques, is a mistake. After spending time in Oliver’s spacious studio, it is as if an alchemy of sorts begins to take place in the mind of the art partaker. For in her paintings, the prose that accompanies each piece, and the process she uses to create them a visual alchemy of rare quality is born.

Alchemy is defined as “a power or process of transforming something common into something special”. Walking into Oliver’s studio, one realizes that there is nothing “common” here. An overwhelming feeling of calm pervades the sunny room, encased by wrap-around windows, showing a spectacular view of the valley below. The walls are adorned with fantastical paintings and collages that cannot merely be glanced at. Paintings are stacked neatly in their framed beauty, waiting to be taken to their next showing. Each painting, each work tells its own unique story.

“I see the spontaneous, free-flowing formation of my art pieces as a form of painted prayer, a bridge between the seen and the invisible, the known and the imagined.” Hearing Oliver talk about the process of making each piece is like being immersed into a pool of warm water. The words begin to flow, and suddenly, things begin to change for the listener.

Oliver, a Utah native, was raised in a family of artists. Her mother, a fashion illustrator, and her father, a commercial artist, kept their studio in their home, where Oliver grew up “dabbling in all the accoutrements of their studio, learning how to use washes and inks.” Consequently, she now uses commercial art mediums rather than fine art mediums. “I don’t usually deal in oils or acrylics, but primarily in inks and dyes.” 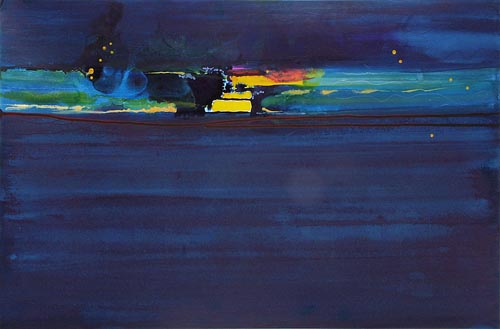 When Oliver was 28 years old and expecting her second child, her mother died of cancer. Oliver and her husband, Gary, had recently moved into her childhood home in Sugar House. The quiet tree-lined streets became a sanctuary for her as she set to work re-furbishing the house of her youth and creating her own oasis for her young family and herself. Her mother’s death left a life-changing legacy to Oliver. “I inherited all of her paints and brushes and supplies. So I started playing around with them, and I actually set up in the space that used to be the studio in that home.”  Oliver says that “things just started happening.”

At the beginning, when she first started painting, she was doing very intricate, impressionistic paintings — almost miniatures, following in the footsteps of her mother. Lisa remembers watching her mother painstakingly painting the individual hairs on an illustration of a detailed mink coat for a fashion illustration. She also recalls hearing her mother often say she wished she could break out of that mode, and try something bigger and wilder. Something with color.

That was the point in her life where the alchemy began for Oliver, transforming her art into the “big” and the “wild” that her mother once wished she could do. Her mother planted the seed which came to full bloom years later in Oliver’s own work, in the same studio. Once Oliver opened up her thought processes, she says that “the pieces started getting bigger and looser and more abstract, more colorful. Some of it is talent and learning that I received from them [her parents], and the rest of it is just spontaneity that comes through when I am open to it and when I allow it to come through.”

Oliver began showing her work in 1988 in galleries, festivals, and competitions as well as private residences and businesses. Having always been a businessperson, she integrated her keen business sense into her art, creating various companies over the years. She is the founder of Utah Visual Artists, which is an organization that facilitates growth and creates venues for the emerging artist. Realizing that restaurants and businesses were the perfect venue for the new artist, she began to show in various restaurants around town, including a show at the Rio Grande Restaurant, and paintings displayed at Urban Bistro Restaurant. She also is the co-founder of D.Va (Diversity in Visual Arts), which is an advocate organization aiding non-traditional and under-served artists in the community. She has worked tirelessly in behalf of public artists and artists selling in Pioneer Park and other public venues. This might leave little or no time to paint, but the painting goes on.
Oliver’s home is now on a lush hillside in Bountiful, and the house is surrounded by dense trees and foliage, with pathways leading from one quiet forest enclave to another. Her studio, the centerpiece of the house for Lisa, is an intrinsic part of her creative process. “Usually, I can have a whole day with no one around, the wind blowing through, the wildlife outside and the meditative music on and I can just be on the floor surrounded by all of these inks and dyes. To see what comes through, it’s almost like a high.” Colors are dripped and swirled onto wet illustration board and transformed into ethereal and oftentimes cosmic creations.

The process of creating her paintings is unique. “Unlike most artists, I don’t work from a canvas, because the medium I use doesn’t allow it.” Working from illustration board, Oliver’s alchemy is created by using various chemicals along with her dyes and inks. The use of the chemicals often separates the dyes into their original colors, adding an element of surprise to the creation process. “I like to see what different chemicals will do to the medium and so I play with that.”

She saturates the board so that the color deeply penetrates, creating a depth that other mediums might not allow by simply sitting on the surface of the board. Afterwards, blocking the boards to dry makes it a more tedious process, but the results are worthwhile. The final outcome of the painting is not seen until it is completely dry.

Paint brushes are only rarely used, the smaller ones being utilized for intricate detail work, while sponges, rags and large round sable brushes are her primary tools. The entire room is utilized, since spreading out on the floor on a large tarp to keep the moisture from running is a necessity. “After it’s dry and I put it vertically, it’s surprising the changes that occur. One in particular is now completely reversed from the way it started originally.”
There is a tangible energy as she describes her technique, a “vibe” as she would refer to it. Looking at the vibrant colors and images, it is easy to get lost in the paintings, to try to find something in them that no one else can see. It becomes an obsessive game while looking at her work; creating your own personal meaning for each piece.
Oliver, who at one time wanted to be a journalist, is also a published poet. “Words have always been like a toy to play with. I’ve always twisted words and used them in different ways. They have always been a form of art to me.”

The paintings for her shows are created so that each piece has a “voice” represented by prose that is alongside the painting. The paintings are nebulous to a point, emphasizing her desire to appeal to a wide range of viewers. “I want them to mean different things to different people.” She has them wired on the back so that the purchaser can hang the paintings any way that they see fit, and has purposely not signed them on the front, so there is no “up” or “down” to the painting.

“When writing the prose that accompany each painting, the words are generally not meant as a literal description of the painting, but to hopefully present a meaningful message for the reader and viewer,” Oliver says. Creating paintings and text that might strike a resonant chord personally with someone is a vital part of the creative process for her. With paintings entitled “Chi,” “Glyph” and “Magi,” the magic of the text entwines itself with the pieces’ voluptuous colors and mesmerizing designs.

The physical proximity between the viewer and the art is also important to Oliver. “I prefer intimate venues such as upscale restaurants and businesses.”

She has shown in many galleries, but feels that “there are a lot of hoops to jump through with galleries. It’s more impersonal to me. I’d rather have people sitting around in a close one-on-one relationship to my paintings, rather than to have them just walk through once a month and see my paintings on the wall, and then never see them again.” She finds that it is more interactive to have the painting hanging over the table while at dinner. She has done very well and sold effectively in restaurants, although she still enjoys showing in galleries and does not dismiss the idea from her future.

Oliver’s works are currently hanging at the Oasis Cafe. She feels that the metaphysical nature of the location will work well with her paintings, and it’s been a goal of hers for years to show at the Oasis, adding that “it has the perfect ambiance for my work.”

Sitting on the floor of her sunlit studio, surrounded by family mementos and pictures, books and inks, Oliver’s future appears to be as open and bright as the room itself. The last few years she has decided to “just put it out there and take whatever comes my way.”

Wanting to make sure that her art is personally fulfilling is important, but it is her main goal to have people simply view her art. Adding that they may not appreciate it, she would like people to “at least experience it” on any level that they choose. Perhaps an alchemy of sorts will take place for the viewer, and they will make their own personal discovery as suggested in her poem from the painting “Prism.”

Within the universe
a window in time,
a shaft of iridescence
beckoning to beyond.
The heart beholds
what the eye cannot–
the resonance of the
discovery of the soul. 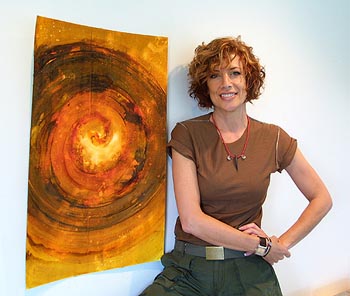 Oliver’s works are currently hanging at the Oasis Cafe (151 South 500 East in Salt Lake) through August 31st. A reception will be held August 14th from 6 – 8 pm.
This article appeared in the August 2003 edition of 15 Bytes.