It goes on all over our country — housing developments sprout up on the outer rims of our suburban areas, attracting young homeowners looking for the amenities of suburban living along with the promise of open spaces. In a few years time, though, those fields and prairies are consumed by new development, so that a young family once living a semirural existence may quickly find itself packed into the middle of suburban sprawl.

Brown grew up in just such a neighborhood, in Hillsboro, Ore., a town 20 miles outside of Portland that was once on the edge of the countryside.  Over the past three decades, however, companies like Intel have established campuses in the area (their Jones Farm campus in Hillsboro was a farm recently owned by, yes, a Mr. Jones) and Brown’s childhood home has become part of a dense suburban area.

Something similar is happening to her in Utah. When she and her husband first settled in Lehi over a decade ago, their neighborhood on the east side of I-15 bordered an area of farms and open space that to the north extended as far as Traverse Mountain (which at the time was home to little more than jackrabbits and hang gliders). Over the past decade, and especially in the past few years, her almost-rural subdivision has been surrounded by new developments, which now extend north of a very busy SR 92; where once the Lehi Block Co. was the only business you could see from the highway, large office complexes like the Adobe building are sprouting up along what is being called “Silicon Slopes.”

Since Brown’s work as an artist has always been concerned with the intersection of the natural and the humanmade, she has paid close attention to the type of suburban sprawl that has grown, metamorphosing around her on a daily basis. It is the central focus of her new work now on display at Art Access. 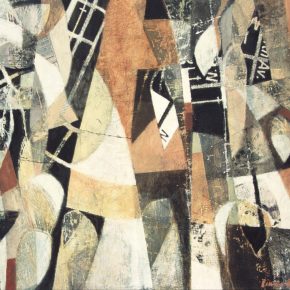 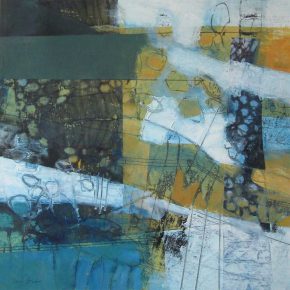 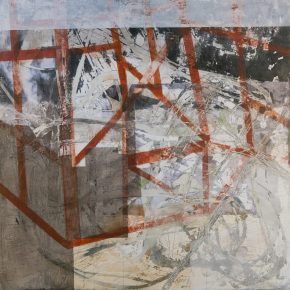 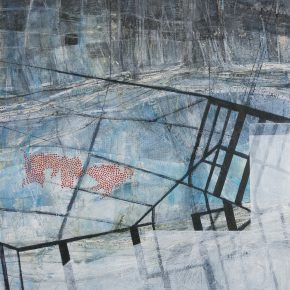 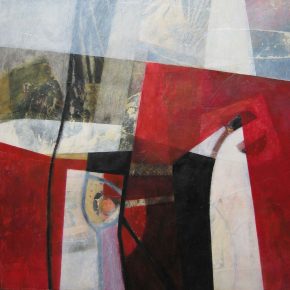 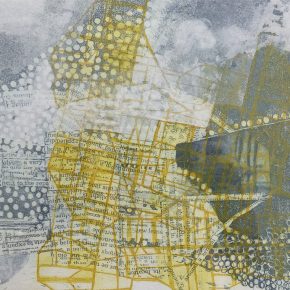 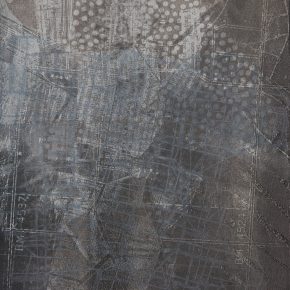 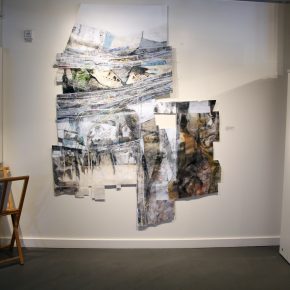 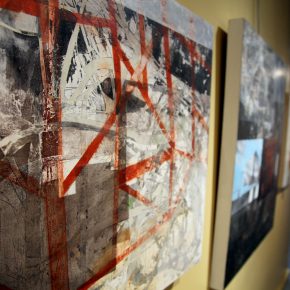 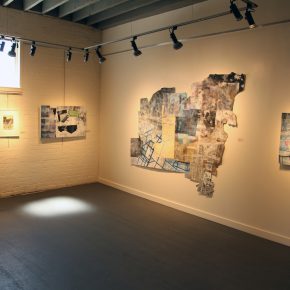 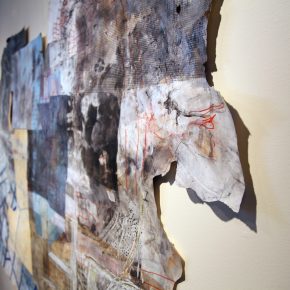 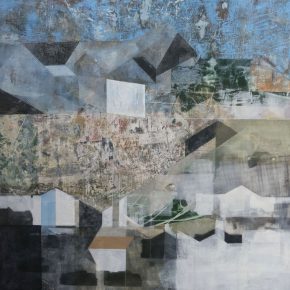 Born in Portland, Brown spent her youth in Hillsboro before coming to Utah in the late ‘90s to attend Brigham Young University, where in 2001 she graduated with a BFA in painting and a teaching license. Because her husband already had a job in Utah County, the couple settled in Lehi and Brown found a teaching position at Pleasant Grove High School.

She taught there for two years before beginning a family. “When my oldest was born, I became a full-time mom and a part-time artist,” she says. She continued to show on a regular basis, however. “I feel like I never really put [my career] on hold. I felt like I was always just trying to keep my foot in the door.” In that respect she’s like a lot of artists she knows, who find it hard to make a living so have a day job. “So I guess my day job is being a mom. And I make way more art in that setup than I did when I was teaching school.”

She has shown yearly over the past decade, at venues up and down the Wasatch Front as well as in Oregon and Colorado. Her works are visually dense, frequently calling to mind aspects of both analytical and synthetic cubism. Biomorphic imagery frequently interacts with humanmade imagery, specifically maps. “My artwork is based on the idea of achieving a visual balance between conflicting ideas and imagery,” she has said in the past. Her positive and negative spaces ebb and flow, back-and foreground intermingling and changing places. Textured surfaces and overlapping or interlocking planes of sometimes discordant and sometimes harmonious imagery make her work almost immediately recognizable.

In 2013, with her children getting older, Brown was eager to create more work, so she decided to begin the MFA program at the University of Utah. “I thought the structure would be good to force me into [making work], give me more feedback, to jump- start me.”

She may not have anticipated how difficult the two-year program would be. “It was stressful for our family,” she says. “Things did not run smoothly for two years. If I had known, I might not have done it, but it provided the push, the challenge that I needed. You have to make work, even if you don’t know what you’re doing, you have to make work and work through things.”

Brown’s MFA final show is up this month at Art Access in an exhibit called Rewritten Places. These pieces are an extension of what came before, but the past two years have definitely paid off in work that is emphatically more mature, complicated and well-crafted.

“Ever since my undergrad stuff I’ve been really interested in the interaction between natural imagery and manmade imagery, how they compete or fit together,” she says. Her professors in graduate school wanted to push her, formally but also conceptually, to investigate what it was about this subject that interested her, that meant something.

“I was making the commute [from Lehi to Salt Lake City], feeling really stretched in terms of time and space and watching all the construction going on. You come to realize this intersection of natural and manmade is not harmonious, is not balanced. So my work started to take on more of  this investigation of development, the kinds of communities and spaces we travel through and I started to think more about the maps as geographic areas, as manuscripts that are constantly being edited and added to.”

Her multimedia works on panel have become more densely layered. “I usually start best if I have something specific to work from and abstract it from there,” she says of her process. An aerial view of a subdivision or street might provide the framework for one of her works, but she quickly begins altering it. “I’ll add a bunch of loose, gestural parts to respond to,” she says, and then she begins “a process of building up, then scraping away.” Which is why she refers to these works as palimpsests.

She has also been expanding her media, adding varied materials to her paintings, and working this last year in printmaking and with large (5′ x 6′) works on paper.  The works on paper allow the support to develop organically: she glues on an additional piece of paper when she feels the work needs it, or cuts something out that is not working. Rather than rectangles, these works on paper end up resembling the contours of geographical entities like towns or countries. They have a more natural feel.

That is not to say the natural is winning out in Brown’s decade-long exploration of the interaction of opposites. “I still think that where the natural and manmade merge together can be really beautiful and exciting, but as far as what I’m responding to in the built environment that I see, those moments become smaller and smaller, and maybe more isolated and fragile. So, yeah, I think the works are definitely more dominated by the manmade.”

The works are undeniably captivating. The Art Access exhibit displays a large and refined repertoire of mark-making techniques in sophisticated compositions that pay dividends to the attentive viewer. It’s ironic that what artists do is make visually compelling work out of even negative experiences. Brown is dismayed at the unthoughtful development going on around her daily, but her visual musings on it are extremely seductive. “Just because something is beautiful doesn’t mean it’s morally good,” she points out. 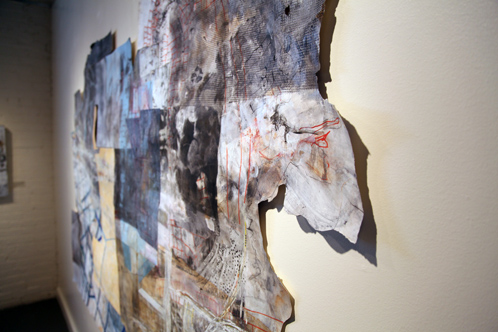 Rewritten Places, Palimpset paintings by Linnie Brown is at Art Access in Salt Lake City through August 14. To view more of the artist’s work visit linniebrown.com.