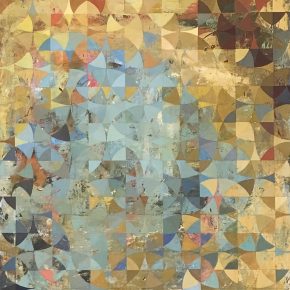 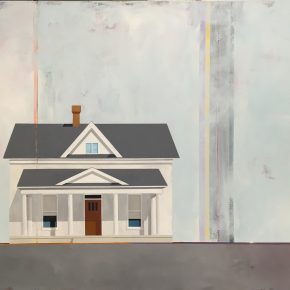 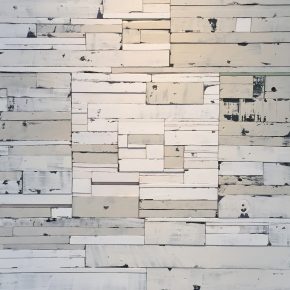 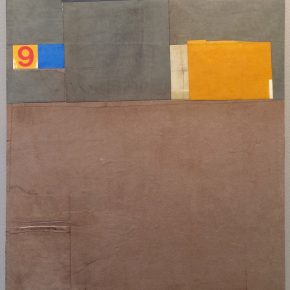 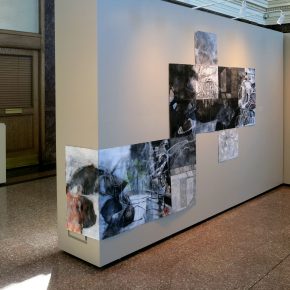 DemoGraphics, the Rio Gallery’s recent group exhibition, was a showcase of seven regional artists brought together through themes of visual language and communication. According to the gallery:

“The exhibition explores communication with a personal, visual language, asking the viewer to let the artwork be heard. The viewer is invited to engage visually, withholding a verbal assessment and giving the piece a chance to speak in its native tongue.”

This summary was a modest prelude to an expertly curated exhibition that had the power to transport the viewer through stunningly structured works that spoke of color and formal shape. Visitors were afforded the opportunity to witness dialogues between the artists as lines straight and curved were knit together forming flat and dimensional surfaces.

Paul Cézanne was a strong presence throughout the exhibit, his deep interest in determining and creating complex spatial considerations while working on the canvas’ flat surface was one thread that bound each work in the exhibition. The unseen harmonies found in nature, that hidden order that was so important for Cézanne to uncover and reveal to his audience, was another thread that ran parallel to each work. Through the inclusions of these specific artists’ works, the viewer could dive deep into spatial expressions and find singular modifications from work to work. Rebecca Klundt’s “Reformation” (2016, acrylic on wood), an assemblage of small pieces of painted wood put together in intricate patterns, served as an excellent example of how modifications within a strong artistic style can render each work unique. Another way to find these modifications within a body of work was in Liberty Blake’s series “All I can think about is what if I miss the sunflowers this year” that included the 2014-16 collage labeled as #1. Each work in this series carried the thread of conversation between them but a close reading between them always led this viewer to the strong composition of #1, placed in the center of five works.

Joseph Ostraff’s works showed the most diversity of medium, from video to singular canvases to the serial work “28 Layers of Imperfect Paint” (2016, oils). Lines provided the unseen thread linking his body of work, requesting of the viewer to look below the surface to appreciate the contribution each mark made to the overall conversation. An artist whose work exhibited a strong command of line in a wholly different way was Linnie Brown. Her expansive piece “The Privilege of Conveyance” (2016, mixed media on paper) wrapped around the main surface of the gallery wall to inhabit the wall’s side as two dimensions turned into three, both on the surface of her paper and in space.

Justin Wheatley’s selection of domestic architectural structures included “First Left, Second Right” (2016, acrylic). The vertical lines on this work created additional zones within which to consider both the application of paint and the meaning of color, to reconsider the meaning of home and the spaces they inhabit. Jenna von Benedikt’s “Path of Redemption” (2015, oil on panel), with its strong vertical, horizontal, and diagonal message structure succeeded in allowing the color gradation and marks to provide the mood. This nonrepresentational piece spoke expertly to her other works rooted more in the natural world.

Paige Anderson’s “Unwearied” (2016, acrylic on panel), along with her other works on display, evidenced another artist with a strong, consistent visual statement. Her subtle placement of color both formed and informed intersecting, iconic shapes of circles and squares. “Unwearied” seemed a new translation of American artist Robert Rauschenberg’s multimedia work “Bed” (1955), from its vertical orientation, to the movement of color drawing the viewer’s eye from top to bottom, to the expectation of being able to “fall” into each canvas with differing but equally satisfying results.