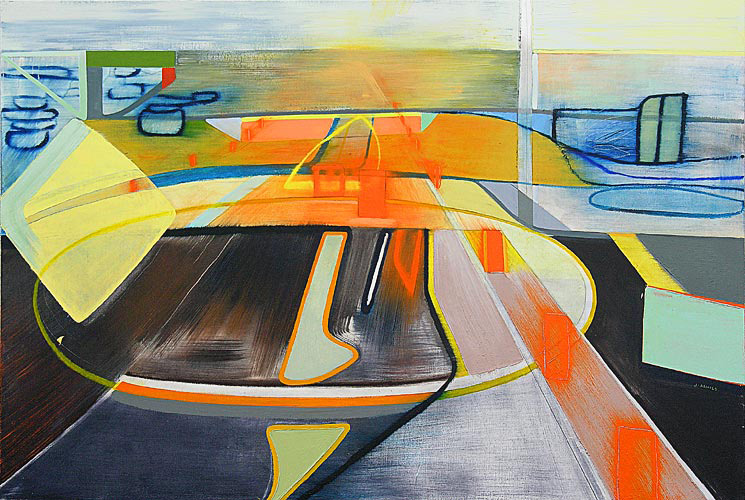 Modernism brought about a re-examination of all aspects of life, including music, architecture, literature and art. As a movement, it also gave birth to the flâneur, a term derived from the French verb “to stroll.” Coined by 19th-century poet and art critic, Charles Baudelaire, the flâneur was seen as having a key role in understanding, participating in and portraying city life. Baudelaire believed that traditional art was inadequate for the complications of modern life, and that it was the flaneur’s role to stroll amongst the populace and become “a botanist of the sidewalk.”

Baudelaire’s concept of the flâneur is important because he opened up the city as a space for investigation and critique. Instead of focusing on how people affected a city, Baudelaire and others sought to analyze the impact cities had on people. Late 19th-century sociologist Georg Simmel, for example, theorized that city dwellers are constantly bombarded by the fast pace of the crowd and an assault of light, movement, and sound (at a time when big cities were defined as having a population of 100,000 or more and the car was still an experimental, slow-moving anomaly). This overstimulation, Simmel believed, led to a “blasé attitude” — an intellectualized way of merely observing without emotion. Thus, the importance of the flâneur was clear, for in his non-time-limited strolling, he carefully critiqued phenomena that busy urban residents failed to notice on their hectic ways from one specific place to another.

Although it is arguable that le flâneur has morphed into le driveur over the intervening century and has expanded into territory beyond the city, the general concept of observing life from the “slow lane” is still alive in today’s art world. For example, Art Access Gallery just featured an exhibit, now at Gallery OneTen, whose source of inspiration was Highway 89. Namon Bills, artist and coordinator of the Art Access exhibit, says of traveling from Idaho to Arizona, “The experience was unique – not one of traveling from point A to point B, but of traveling the road for its own sake. . . . [W]e experienced the state in its glory and beauty, its ugliness and grit, and its shining suggestions of progress and timeworn relics of the past.”

At the Rio Gallery, BYU professor and photographer John Telford is currently showing 50 of his photographs that document “the daily lives and shared experiences of Utahns who live along historic Highway 89.” Interestingly, the late literary theorist Susan Sontag is responsible for connecting the photographer flâneur with the invention of hand-held cameras in the early 20th century. She says in her 1977 essay, “On Photography”: “The photographer is an armed version of the solitary walker reconnoitering, stalking, cruising the urban inferno . . . Adept of the joys of watching, connoisseur of empathy, the flâneur finds the world ‘picturesque.'”

Salt Lake artist Jean Arnold is also an example of a modern day flâneur. For over ten years, she has sketched while riding on buses, trains, or in cars. Arnold says she likes to capture different urban elements in flux — vehicles, signs, road markings, trees, buildings, etc. — and “remove” them from their original context and into her sketchbook where they coexist in new relationships. In essence, she says, she “creates a dense layering of geography, compressing miles of space and time into one image.”

For several years, Arnold just drew when she was a passenger in a vehicle on her way to a specific destination. Then, in 2004, when she was in Reno accompanying her husband at a conference, she found herself with some extra time. She hopped on a bus and sketched attentively as the bus meandered the city. Arnold enjoyed being able to focus on the urban environment without the imperative of needing to be somewhere, and eventually ended up riding half the bus system over the next few days. She has since ridden buses and trains in Salt Lake City, Denver, Little Rock, and Santa Fe to “explore urban stretches, watch people, and draw like crazy.”‘ 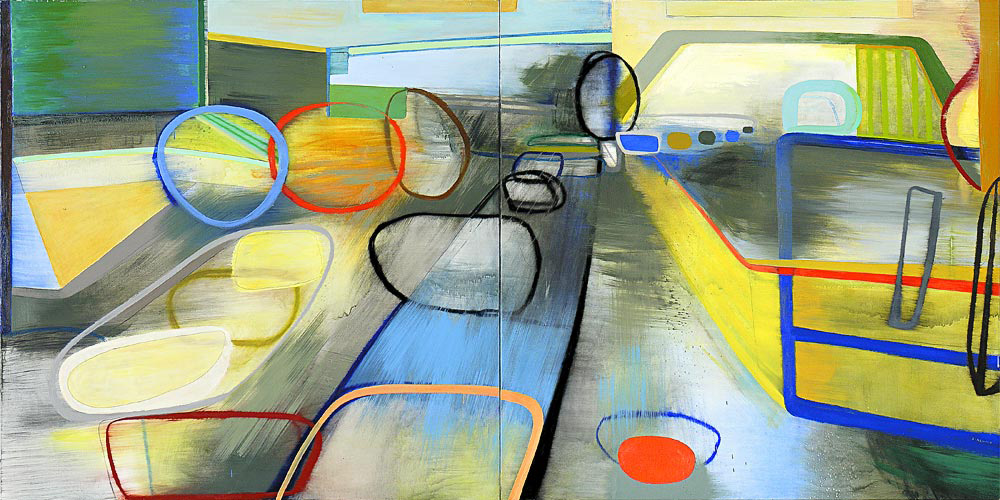 After a few years of creating travel sketches, Arnold started to focus on the myriad thoughts riffling through her mind about what she was seeing. She began incorporating them into her sketches as well — as if fragments of commentary wanted to join the linear conversation. For example, drawings from a Denver excursion contain these words:

Board ‘F’ train at 11:28, waiting
Will go inbound from Lincoln Station.
End of line.

Mall.
We are really near Littleton / Columbine area.
8 years ago TODAY: The Columbine shootings.
Destined to be repeated over + over again . . . even more.
Flags at half-mast this week

As Arnold has wandered the urban American landscape of the 21st century, she has become acutely aware of how modern city dwellers depend on cheap petroleum to maintain their ways of life. She says, “I noticed our ease of travel and ability to enjoy goods from all over the planet — people and stuff going all over the place all the time. In surveying Reno, I was struck that most of the city was built within the last 30 years, and felt trepidation in seeing this new sprawl.”

Arnold’s unease with urban sprawl led her to months of reading environmental books. She also took a writing class in 2004 and became interested in environmental writing. Arnold felt strongly that there was an “off the radar” issue that urgently needed to be addressed. The specific topic came to her a year later when a friend mentioned she’d just attended an energy seminar and was told that all current energy prospects were gloomy. This comment prompted Arnold to delve further into the mechanics of oil production, its myriad uses, and its vulnerabilities as a global energy source. She has since focused her energies on “peak oil” and its ramifications. 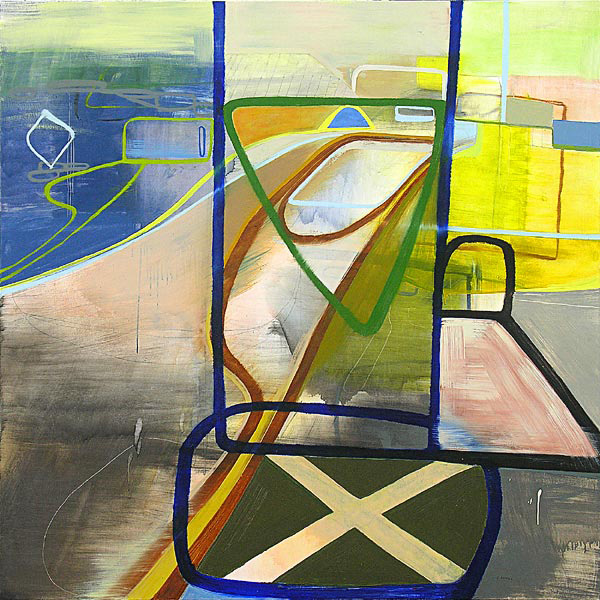 In the October 2006 edition of Catalyst magazine, Arnold writes: “[Peak oil is] when about half the world’s oil supply is used up, production reaches a peak and then declines an estimated 2-3% a year, even as demand continues to grow. Relentlessly, year after year the world has to make do with less oil, even as there are more and more of us. Developing nations and the poor suffer the most.”

While many energy experts believe peak oil is happening now — or soon — some totally dismiss the theory (among them, OPEC – the Organization for Petroleum Exporting Countries). Arnold notes, however, that “even the most optimistic energy consultant’s predictions still leave us facing the dilemma in just a few decades.” Also, Arnold and others believe that regardless of the timing of the actual peak, which can only be determined after the fact, Americans need to understand that their whole lives depend on oil and anydisruption of that source will complicate everything – what we wear, where we live, what we eat, what we drive, and what we buy.

Observations from one of Arnold’s sketchbook entries illustrate her growing concern with oil consumption and dependence. In 11:07/”F” to Lincoln/outbound she writes:

No one can persuade me it
won’t be a disaster.
It becomes the axis I revolve
around. All else seems less real,
dimmer. No one else (or very few)
even have an inkling. Feel
alone,
almost.
The scale becomes apparent as I
ride all around the enormous
sprawl. I see the scale of what
we are up against.
Meanwhile everything seems
just fine.

In order to educate the public about peak oil and its consequences, Arnold and a friend, Michael Mielke, co-founded Post Carbon Salt Lake(PCSL) in November 2006. The group’s mission statement is to “raise awareness in our community about peak oil and the need to prepare for ‘energy descent’ by transitioning to reduced-energy lifestyles and by strengthening local communities – promoting local food, local economy, and local energy.” PCSL holds meetings or film screenings and Arnold provides Powerpoint presentations to elected officials and policymakers. She and Mielke have also recently published a document calling for a Wasatch Front Transportation Security Task Force to investigate and implement alternatives to an oil-based transportation system. 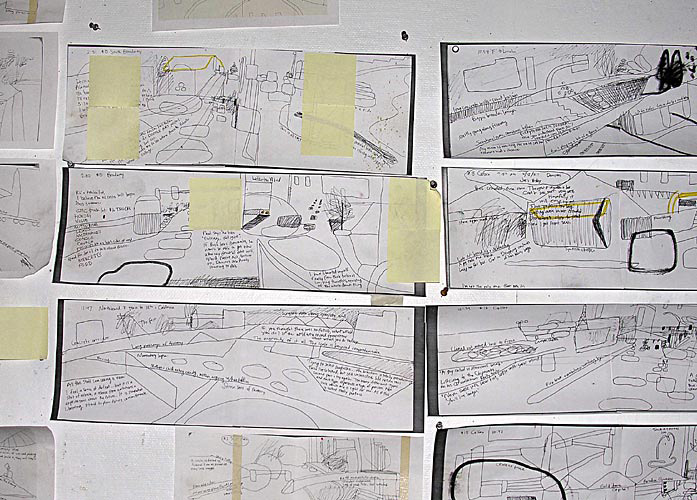 So what if the flâneur is making observations that no one wants to hear — those “inconvenient truths” about how we live? Arnold says it’s hard to get politicians to think about what they’ll have to do to change our oil-dependent lifestyles on a mass scale, and most individuals don’t know about the concept of peak oil or aren’t paying attention. She’s not alone, however, as it seems that sometimes depicting unpleasant reality is the flaneur’s job. For example, 19th-century urban residents weren’t very happy to hear Georg Simmel insist they were too overstimulated to pay attention and had adopted blasé attitudes about their lives. Modern day street photographers have also been known to expose the seamier side of urban life, and in fact believe it is their duty to make people pay attention to what’s hiding behind glossy facades.

One might also ask about the fate of the flâneur/driveur in light of dwindling oil supplies and increasing gas prices. Even for those who are willing to slow down and take the time to observe, will meandering drives become cost prohibitive? If so, then perhaps the flâneur will return to his (or her) original incarnation — on foot. 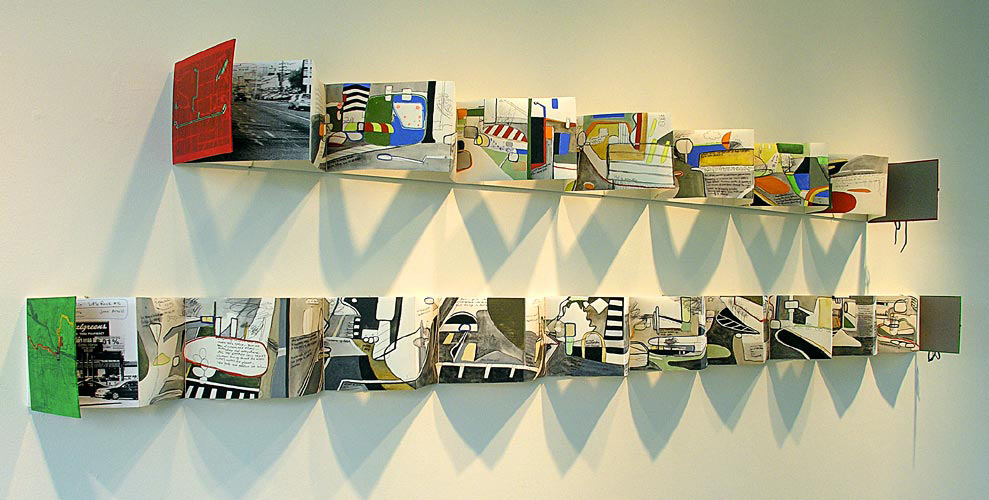 Jean Arnold currently has an exhibit of her paintings and large works on paper at the Yellowstone Art Museum in Billings, Montana entitled Perpetual Motion through June 8.