Life in El Oltro Lado: Reyna Grande’s The Distance Between Us, A Memoir

Author Reyna Grande will appear as part of the six-week-long Utah Humanities Book Festival Oct. 25, 2014 at 4 pm at the Salt Lake City Public Library, Auditorium, 210 East 400 South, downtown. Copies of the book will be available for sale and to be signed by the author. 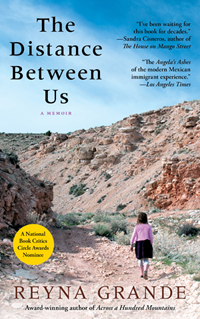 When Reyna’s father leaves the family to go the United States she is two. When her mother follows, promising to return in one year, she is four. For the next five years she, her sister Mago and her brother Carlos are shuffled between grandmothers and considered orphans, because, when a father or mother leaves Mexico for the United States, they very seldom return.

In The Distance Between Us (Washington Square Press, 2013), award-winning novelist ReynaGrande chronicles her early life in Mexico, as well as her experience migrating to the United States. Originally published in 2012, her story of being separated from her parents in the process is not unique; eighty percent of Latin American children entering the U.S. find themselves, at least temporarily, as orphans in a new land. Her memoir provides readers an intimate portrait of the costs of separation to both parent and child.

Because Grande is so young when her parents leave for the U.S. she has virtually no memory of them. To remember her father, she carries around a framed photo from house to house, calling him “The Man Behind the Glass,” and invents memoires of the man who will one day return to save them. To remember her mother, Grande carries the mental image of her umbilical cord buried in the shack behind her grandmother’s house, an invisible tie that binds them together.

When Grande’s parents do return, it is not the joyful reunion she imagined. The children discover their father has left their mother for another woman in the U.S., leaving a broken-down version of “Mami” to return to them, a Mami who pines for the new country she has left behind. This yearning confuses and hurts the girl. She doesn’t understand why her mother, who had left them for so long, would rather be up north in a new country rather than with them.

In 1985 Grande’s father returns to Mexico and decides to sneak his three children into the U.S. Although the family does move, life there doesn’t heal, but possibly even complicates and further injures their relationship. What ensues is a life-long conflict between the parents and their children.  A feeling of distance has been created between them not only through physical separation, but through experience.

Grande herself does not fully understand the distance created by experiencing life in el otro lado, or the United States, until she returns to her native Iguala, Mexico as a young adult. Returning opens her eyes to the poverty she once shared with her neighbors, the same neighbors who now find her no longer Mexican-enough. It is then that Grande sees her childhood through her parents’ eyes.

She writes, “[t]he sight of my grandmother’s shack, with its bamboo sticks, corrugated metal roof, and tar-soaked cardboard, shocked me. Had I really lived in this place?” Grande gains an understanding of why her parents left for the U.S., why her father smuggled her into the states, and why he was such a tyrant about getting an education. As a child she saw beauty in the broken down buildings and trash-lined streets of Iguala, but as a young adult, having experienced life in the elsewhere, she sees a destitution she can no longer ignore.

This memoir is beautiful, experiences and their locations vividly portrayed with colorful imagery and metaphor. Grande’s voice is authentic; as if the author is narrating her story directly to the reader. Additionally, her tale lacks the detailing of gang affiliation, prostitution, and substance abuse often found in the stories of immigrants, details that can, regrettably, create stereotypes.

Although Grande’s life is fraught with heartache, her story is ultimately one of hope; a story of growing up, overcoming, and the healing that seeking understanding can bring. In this way Grande’s story transcends the immigrant experience, and becomes a story for anyone who has felt loss and separation due to changes in location, physical health, job status, disease, death, divorce or any other life changing event.
In the end, for Grande, memories can remain beautiful even if the people involved have changed. She seems to learn this most poignantly when she first watches her mother lament the loss of her marriage and thinks, I wanted to tell her that as long as she held on to those special moments with her and Papi, they would always be hers—that other woman, whoever she was, couldn’t take them from her.

The author also learns that while some memories are beautiful and should be held onto forever, others hurt and inhibit growth. She realizes this as a young college graduate, afraid of making decisions based on the intense fear of disappointing her father. As long as she holds onto this fear, she knows she will never reach her full potential, so she gently lets go:

“I thought about the first time I had seen the ocean in Santa Monica. I thought about my father holding my hand, about how afraid I had been that he would let go of me. I looked at the ocean, and realized there was no need to be afraid. I had gotten this far, despite everything. Now, all I had to do was focus on why I was there—to make my dreams a reality. I closed my eyes and I saw myself at the water’s edge, holding tightly to my father’s callused hand. And I let go.”

As Grande learns to reach toward emotional healing and reconciliation with family members, she grows beyond her past. Readers of her memoir are invited to consider their own lives and to do the same.
–––≠≠
EXCERPT The Distance Between Us, a Memoir by Reyna Grande
(Used with permission.)

She kissed the top of my head and pushed me toward the closed gate. “You need to get out of the sun before it gives you a headache,” she said.

Abuela Evila finally opened the gate, and we were allowed inside, but we didn’t move. We stood there holding our bags, and I suddenly wanted to throw Papi’s photo against the ground so that it shattered into pieces because I hated him for taking my mother from me just because he wanted a house and a piece of land to call his own.

Mami gave us each a hug and kissed us goodbye. When she kissed me, I pressed my cheek against her lips painted red with Avon lipstick.

Mago held me tightly while we watched Mami walk away, pebbles dancing in and out of her sandals, her hair burning black under the sun. When I saw her blurry figure disappear where the road curved, I escaped Mago’s grip on my hand and took off running, yelling for my mother.

Through my tears, I watched a taxicab take her away, leaving a cloud of dust in its wake. I felt a hand on my shoulder and turned to see Mago standing behind me. “Come on, Nena,” she said. There were no tears in her eyes, and as we walked back to my grandmother’s house, I wondered if, when Mami asked Mago to be our little mother, it had also meant she was not allowed to cry.

Carlos was still standing by the gate, waiting for us so that we could go in together. I looked at the empty dirt road once more, realizing that there was nothing left of my mother. As we walked into my grandmother’s house, I touched my cheek and told myself there was something I still had left. The feel of her red lips. 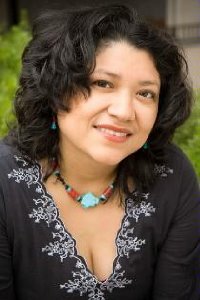 Renya Grande is recipient of the American Book Award, the El Premio Aztlán Literary Award, and the Latino Book Award. In 2012, she was a finalist for the prestigious National Book Critics Circle Awards. Her works have been published internationally in countries such as Norway and South Korea. Her novels, Across a Hundred Mountains, (Atria, 2006) and Dancing with Butterflies (Washington Square Press, 2009) were published to critical acclaim and have been read widely in schools across the country. In addition to being a published author, she is also an active promoter of Latino literature and is a sought-after speaker at high schools, colleges, and universities across the nation. Grande currently teaches creative writing at UCLA Extension and is at work on her next novel.