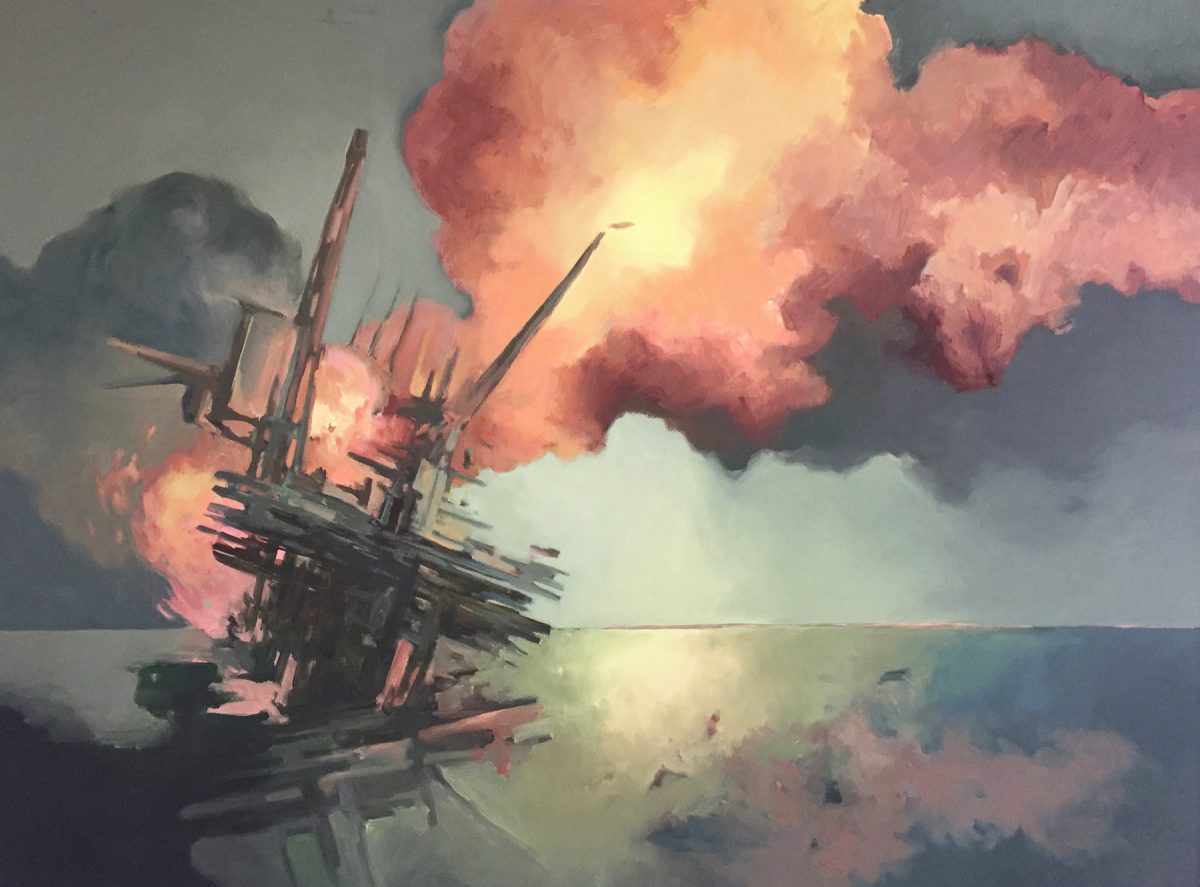 Lenka Konopasek is always blowing things up or burning them down. Her beguiling works in paint or sculpted paper, now in a solo show at Nox Contemporary, make manifest that disaster is her thing, her oeuvre — but why is that? We arranged to meet at Nox to discuss it.

In addition to a longtime partnership with Utah sculptor Cordell Taylor (they met at the U of U in 1990) and a teenage son with solid artistic sensibilities (he capably critiques his mother’s work, she says, and claims a Superman film he had them watch together — wherein the world is destroyed — was a major influence on her work), Konopasek is also adjunct art faculty at both the U and Westminster College — so our meeting took some juggling of schedules. But here we are at 11ish on a sunny Monday with gallery owner John Sproul at hand as a bonus. 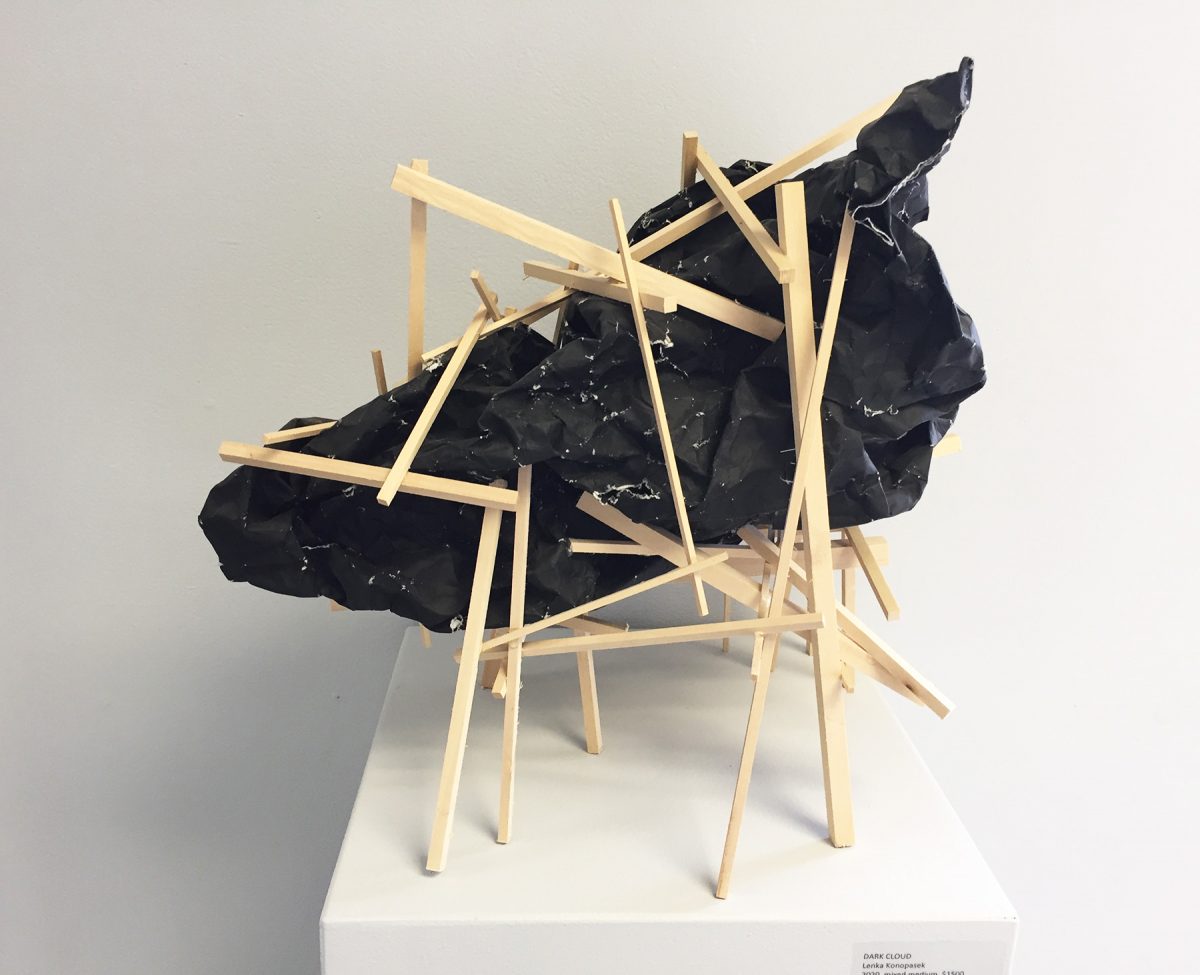 Walking in, the dynamism to this expressive show is evident, not merely the volatility apparent in any single work but also in a strong rhythm to the way the pieces have been hung (by Sproul) that makes you want to keep looking back over your shoulder as you move around the intimate space. Pleasing paper sculptures (smaller in scale than we’ve come to expect from this artist) seemingly held up by complex fragile wooden stick supports are placed where they will capture the most attention. This show of Konopasek’s is big (but not crowded) and colorful — all those fires and explosions, you know.

And the artist, who guards her privacy, eventually will tell us — after a lot of provocation and some deep thought — that 2003 is when it all began. 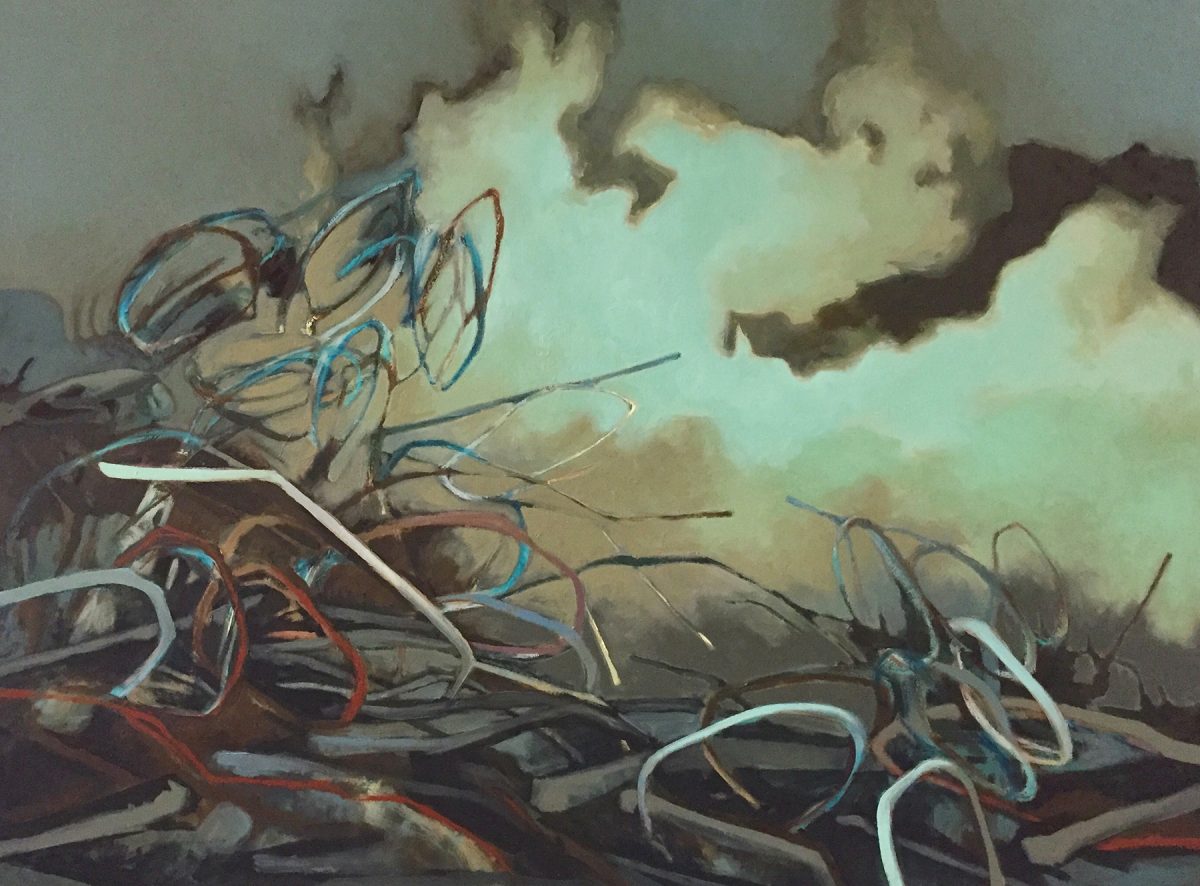 “For me, overall, I remember when I first went to the U I had a different palette from the American students because in Europe how I remember the landscape [with some nostalgia involved, she acknowledges] — there are the fields and the muddiness and a rawness of the landscape. It’s much more intimate because it’s on a smaller scale, but it just feels different than the landscape here. Here I feel more exposed,” says Konopasek. “So, there is just this strange connection for me between the colors of the European landscape and sort of a history of internal thinking and the types of thinking I grew up with — some of the Czech artists, Romanticism, how the landscape is being portrayed [she finds portrayals of early American landscape by Bierstadt and his ilk unreliable, too romanticized], there are these different influences in my work about what is reality and what isn’t. I think that there is an element that is always about light that comes out of the landscape that makes it look more interesting than it is.”

The artist says one aspect of her work is that she finds it “extremely frustrating that instead of recycling and trying to preserve nature we are imposing more and more on it and I don’t see how it can go on. I am a very anxious person, and it gets me down. Even the new directives that say we cannot recycle this, we cannot recycle that . . . In Germany, when I lived there, they were recycling 30 years ago. They had [specific] bins for everything. That’s one thing. Another? It’s so hard to find pure nature anymore. I love to go to the mountains. I live in a city and it’s important to have access. The work I am doing is influenced by my own anxiety. I don’t see it as gloom because I do find beauty in it. I am sort of going back and forth between those two ideas. I am painting my way through it.” 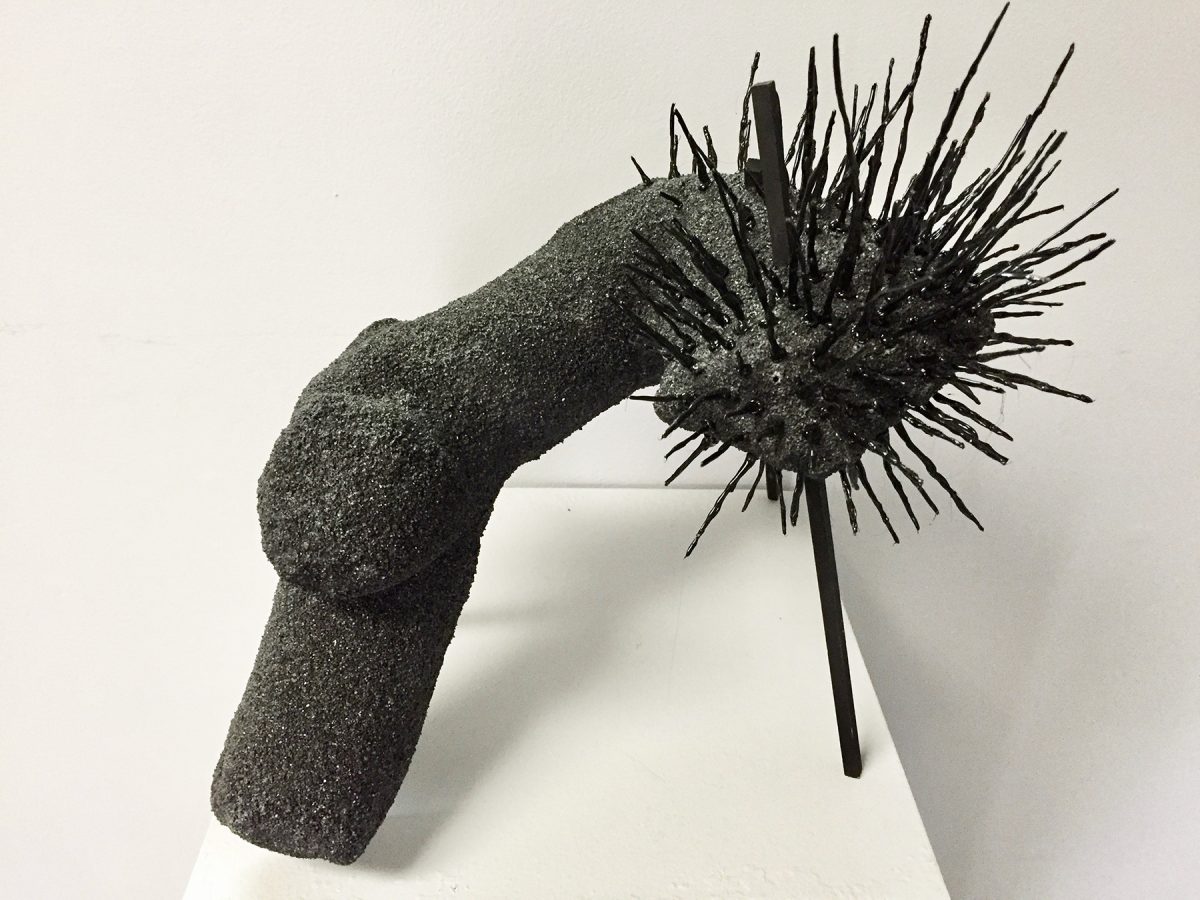 Konopasek offers that some works in the show are older and some are new. “I had John [Sproul] help me pick the work. I think that’s really important because I am just too close to it,” she explains.

“This one is a rollercoaster,” she says, pointing to a large work of deconstructed track and hints of carny-ride cars strewn about the area.”On some level, it’s very organic. The light sort of shines out of the painting – it goes back to the Bierstadt idea,” says Konopasek. “I like the light that sort of shines out of the painting. I like that quality. At the same time, it’s that strange light that isn’t realistic. That pre-storm light that is sort of greenish,” she adds. (And it is eerie, that glow.) “So, they have ideas,” she says, referencing the painters of the early West, “but in some sense they are sort of completing each other.” 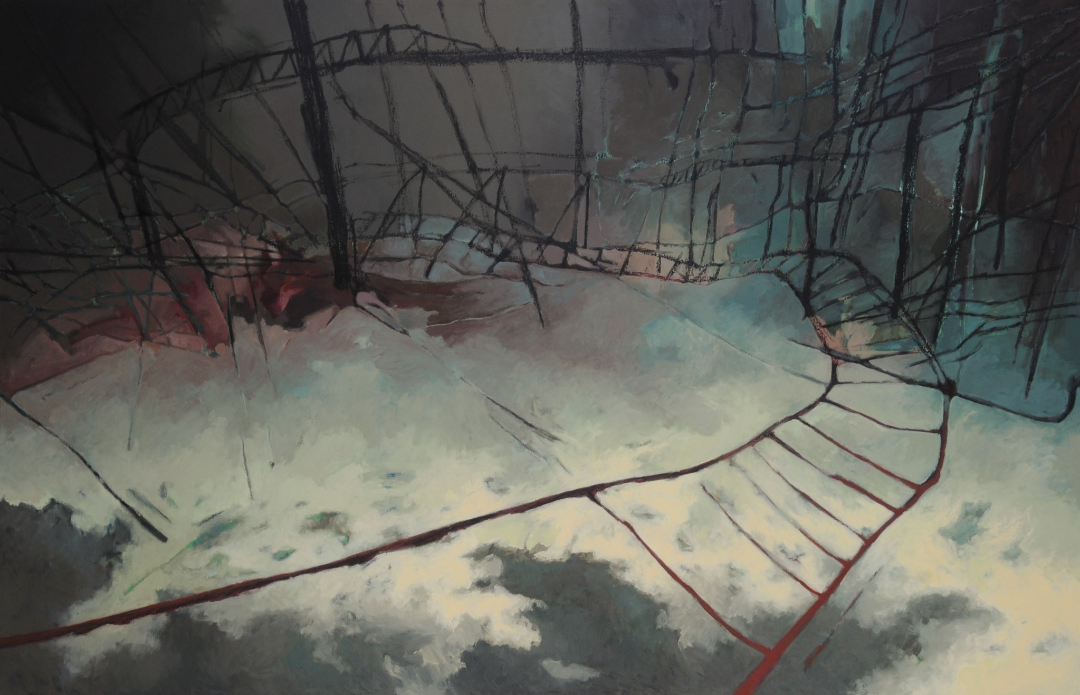 Konopasek sometimes works from photographs and says that over the years, “I’ve had to create a series instead of just painting one work and moving on.” She changes the colors drastically, she says, and avoids creating realistic images.”If I try to paint too realistically I get bored, because you sort of know how it’s going to work out. I started all of them in basic ugly colors, Ultramarine Blue and Burnt Sienna — mixed together, so they started very monochromatic and just so dark. In my own head, as I was working, I was thinking, ‘Yeah, I am making some really ugly paintings. So, I go on adding things in and taking them out and there is just something about the process of painting – I like to be challenged by it. Otherwise, it doesn’t work. Because if I’m bored, it’s a boring painting and other people are bored by it, too.”

That still doesn’t answer the question of why she burns down the perfectly beautiful mansion in the painting before us. Why not just paint the mansion in its glory? “Oh, it did burn down,” she rushes to assure us. “And it was actually an art museum in some Victorian mansion in Georgia or somewhere and I was just intrigued by the idea of the whole thing burning down -— and I think it’s about how we value certain things and what happens when artwork is destroyed.” 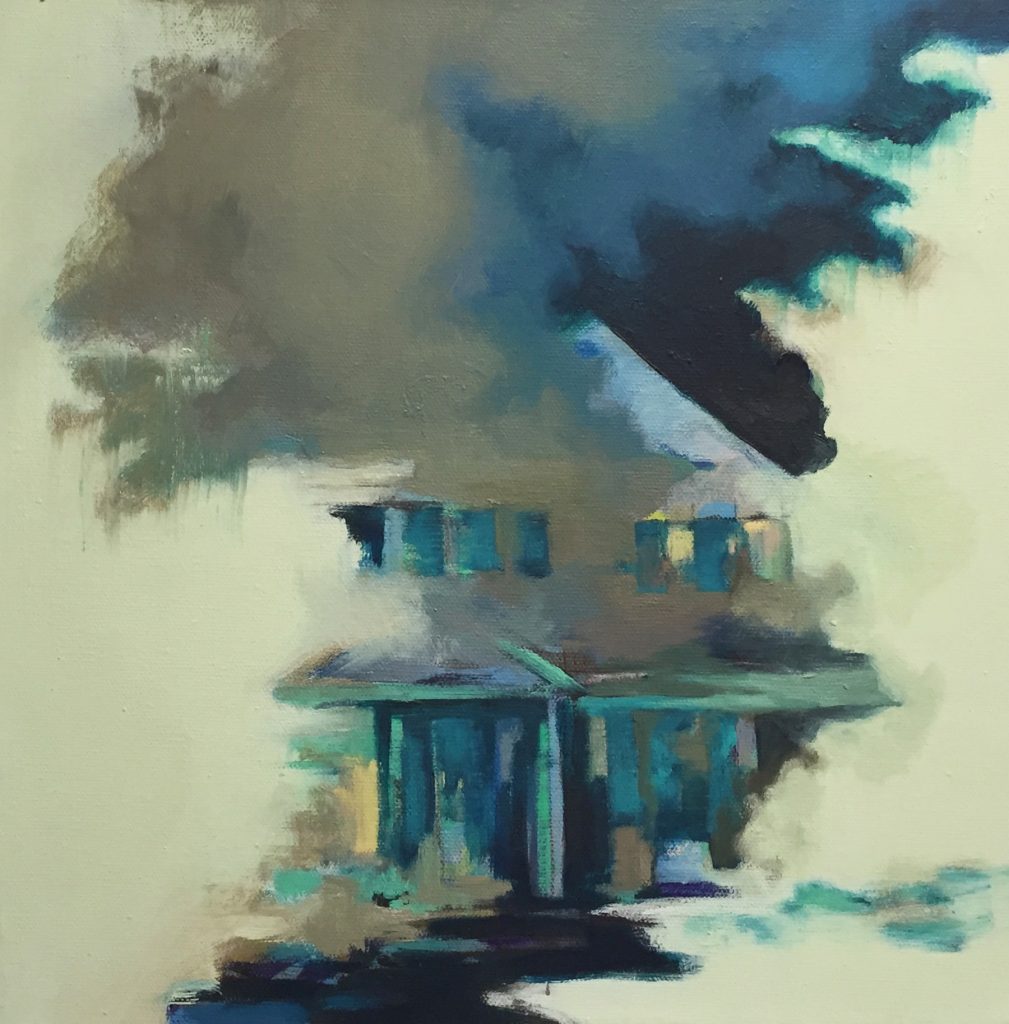 Konopasek explains that things don’t have to be visual to catch her attention, sometimes it is a headline in a newspaper or magazine that grabs her. “Because English is my third or fourth language, it’s like ‘what does that phrase mean if you break it down word by word? What would it mean in Czech?” Konopasek once spoke fluent German and is re-learning that language as well as Italian during the Pandemic. Czech is her native language; her English is excellent.

We come to “Debris Pile #4,” a striking oil of fire and smoke and glowing sky and then enter an anteroom filled with more fire and destruction, the first work we encounter a stellar painting of a burning oil platform: “I was taken with these giant manmade structures falling into the sea,” says Konopasek. “The process of creating them is fascinating but when something goes wrong …” 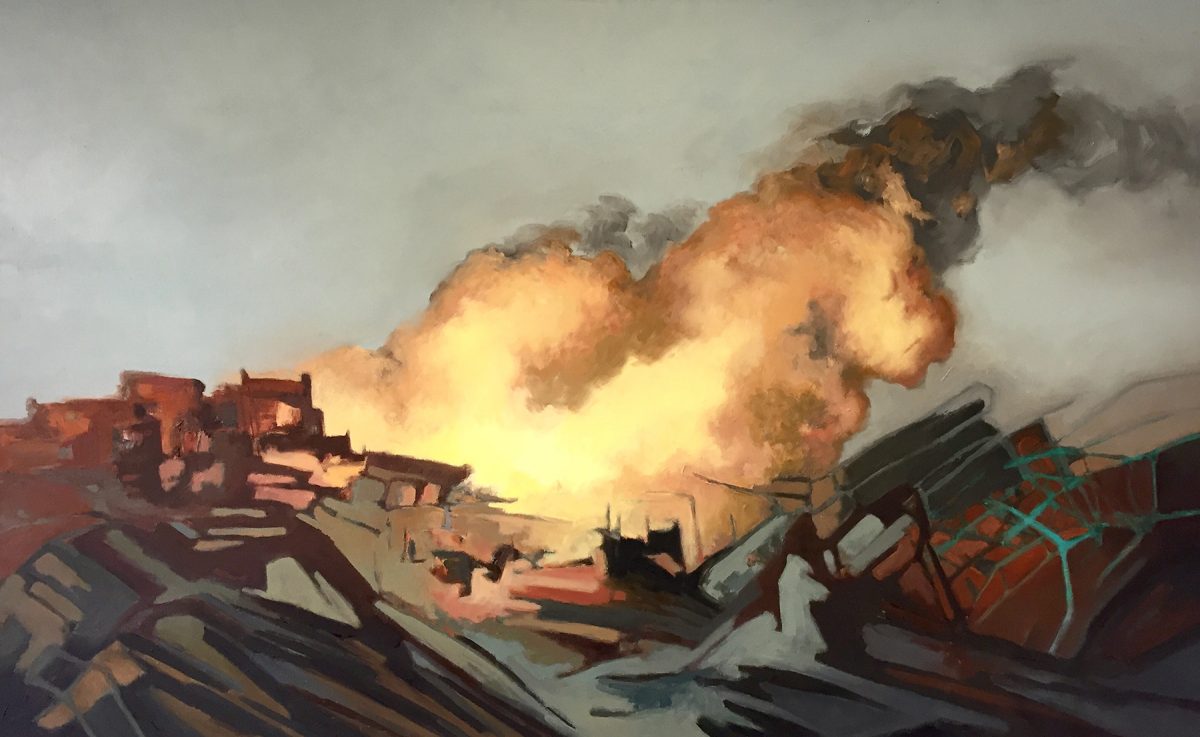 So, what did get her on this path of fire and destruction, we ask again? “It started right around 2003, with me being in the U.S. and all these friends sending me images of everything being underwater because they had the worst flooding ever. And a lot of those images were aerial views, and it was so crazy because you would see, like, the tops of trees poking out of the water. Whole cities were underwater. It wasn’t just Czech Republic, it was the whole of Europe underwater, it wasn’t even being shown here as much.

“For me, being that far away and seeing these images I thought it was crazy, I mean how could that happen? But looking at those images, it was so beautiful, because you get all those reflections with oil spills making beautiful colorful drawings on the water — so you have these two realities: On one hand, you have a beautiful image and on the other hand the complete destruction and almost the inability to comprehend that it’s happening.

“So, I started painting from those images and all those paintings had the really airy sort of colors because I would sometimes invert the colors or change the curves or strange color variations to create the idea of uneasiness, but I think that’s where it started. I really loved those images and was feeling sad that I loved those images so much. And then I started looking for different images that were of different disasters and different consequences and hoping that the images will make people think of some of these disasters. But I am trying to approach them with beautiful images because it’s easier to sort of enter into it.”

It seems that shock and awe will continue to be Konopasek’s focus, at least for the present. You can see what she does by appointment and during a second opening of her show, Debris Pile Landscapes on Gallery Stroll night, March 19, 6 p.m. at Nox Contemporary.