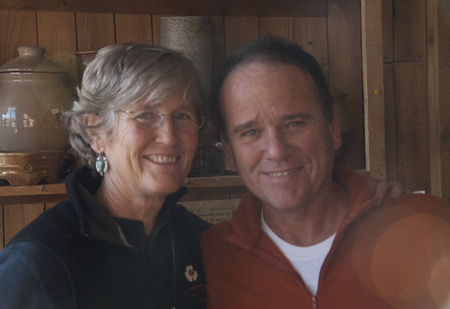 Imagine the leap of faith (and determination) it would take for a young couple with three children to raise, to see if they could survive on income from their creativity. That’s what Lee and Joe Bennion did, supporting each other in their work as painter and potter. Their choice to live in rural Spring City made it more of a challenge, but they knew that was where they wanted to live – both were raised in the countryside and cherish their memories of that time. After many years of hard work their dream has just about come true. 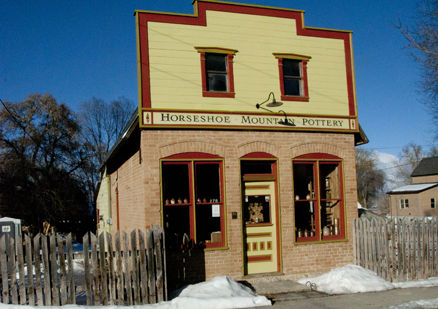 They are empty-nesters now and relatively free to pursue artistic bents. Lee has a wonderful new studio near their house, and Joe has the well-known Horseshoe Mountain Pottery on Main Street. Although Lee is represented by Dave Ericson in Salt Lake City and does quite well, and Joe occasionally gets big commissions (like a set of 100 place settings for Sundance Resort), the couple doesn’t take anything for granted. Lee’s mother (of the Udall political family) had a home-made remedy for dry, cracked skin, which Lee has turned into a product called “Mom’s Stuff” which is sold at the Pottery. Joe works as a river guide in the warmer months. Both of them love being outdoors. Right outside Lee’s studio is a corral with her horses. They are planning to do the next river trip together – she’s good at “reading the river” and attending to logistical details, and Joe asserts his right to be the chef for the guests as well as leading the expedition. 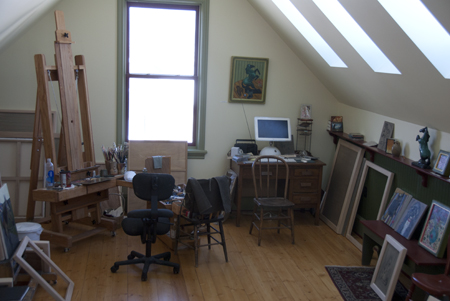 Supportive parents accepted their choices and helped occasionally. Lee says that she never needed to ask for help, and recalls a Saturday, years ago, when her father called and said, “I just had the feeling that I should call you – do you need anything?” to which she responded, ”a new refrigerator”. She had been making do for quite a while by keeping foods in her cellar, but warmer weather was coming. Joe volunteers at a prison, and in his conversations with inmates he emphasizes respect for parents, “even if they were stinkers.”

How compatible can you get? They love the country-side, love art, admire each other’s work , have good work ethics, and have stayed together for 35 years through times Lee describes as below poverty level, to the present where she can have a horse to ride in the country and he can have a tractor to “play in the dirt”.

Lee and Joe Bennion were part of our Artist Couples feature on page 5 of this month’s edition of 15 Bytes.
Learn more about the couple, their work, “Mom’s Stuff” and the 2011 trip along the Colorado at their website: www.horseshoemountainpottery.com

Joe Bennion’s studio was our featured Studio Space in the September 2008 edition of 15 Bytes.

Lee Bennion will be part of an upcoming exhibit of Spring City artists presented at Pioneer Theatre Company’s Loge Gallery by David Ericson Fine Art. People & Places runs February 18 – March 5, 2011, and features work by
Lee Udall Bennion, Randall Lake, Michael Workman, Ron Richmond, M’Lisa Paulsen, Susan Gallacher, Lynn Farrar, Sophie Soprano and Rick Gate.
The exhibit can be experienced on the mezzanine level of the Roy W. and Elizabeth E. Simmons Pioneer Memorial Theatre through the run of the world premiere drama In, by Bess Wohl. The gallery is open from 10:00 a.m. to 6:00 p.m. Monday through Friday and before and after performances for ticket holders.