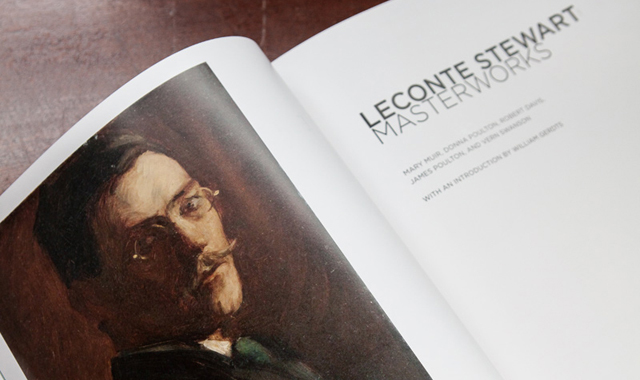 Perhaps the most insightful statement about LeConte Stewart in this very lovely book of over 300 paintings and works on paper — with five accompanying scholarly essays — is made by the publisher in his brief foreword. “He was very durable,” writes Gibbs Smith,|1| who knew the artist from childhood (his mother took painting lessons from Stewart). And durable he had to be, to live to the age of 99 and create almost until the end of his life.|2| He “painted in all kinds of weather, even as an old man,” Smith continues. His output, as a result, was prodigious and, until long into his career, rarely short of brilliant.

Stewart was this state’s Edward Hopper to those with a background in art history, its Andrew Wyeth to everyone else.|3| No one could deny his capacity to deftly convey what was essential about rural Utah and make it beautiful if a little wistful to behold, to take what he called the “mystery of the desert” and make it rich and approachable, to turn our mountains matchless and majestic. There was surely genius. But durability was perhaps one real key to his unique, beloved place in Utah art history. Smith writes that he hopes “this volume will help further assert LeConte Stewart’s importance in the history of American Regionalist painting.” If it is widely read, and it should be, it will do that and more.

This is first and foremost a picture book, as all good art books should be. And it succeeds handsomely on that level. The reproductions are crisp (though you don’t see brushstrokes), Ron Stucki’s design enticing, the typeface inviting and easy to read.|4| The plates are divided into a dozen sections, with titles such as “I Love Barns” and “I Stand in Awe and Reverence.” There are the landscapes, of course, but also the temples and churches, the boxcars and railroad depots, the abandoned storefronts, the little white house in Peterson, near Morgan, painted for us in every season. There are sketches, works done on site and in studio interspersed with well-chosen quotes from Stewart, his wife, former students, Wallace Stegner, Walt Whitman and others.

Mary Muir, who knew the artist as a friend and is one of the foremost experts on him, addresses Stewart’s education and major life events from grammar school through the Art Students League and his work with Tonal Impressionism at some length including the development of American Tonalism from various European roots. A couple of photographs in this chapter aren’t sufficiently captioned (where, exactly, is Stewart in that group photo at Coopers?) and a muddy picture of the artist from 1913 isn’t in keeping with the standard of the rest of the book. The essay offers information invaluable to understanding the artist. Muir states, for example, from an interview, that Stewart experienced an isolation, a loneliness, following the early deaths of his mother and siblings “which all my life I have yearned to put down in paint.” That’s insight, too.

This book stemmed from a dual exhibition of the artist’s work held in 2011. Robert Davis was curator of the LDS Museum of Church History and Art’s LeConte Stewart: The Soul of Rural Utah while the eponymous Depression Era Artwas at the Utah Museum of Fine Arts under curator Donna Poulton.|5| Both have essays in the book.

Davis thoroughly covers Stewart’s life, training, artwork and legacy in a meaty, conversational essay focused on his rural landscapes. It’s excellent. He states, helpfully, that Stewart’s style was a composite of Impressionism, Tonalism and Realism “mostly as practiced by American artists from 1900 to 1940.” He also points out that for Stewart, “Nature and landscape, God and religion, creative activity and truth . . . these were all part of the same whole.”

Poulton writes, in her comfortable, informative style, that following the 1913 Armory Show (which we learn Stewart attended) the search was on for an authentic American art. Maynard Dixon and Hopper thought this could only be found in the environment and Regionalism was a result. She questions whether Stewart’s landscapes can be strictly categorized as Regionalist but urges that his Depression-era paintings do fall under Social Realism and can be compared to those of Hopper.

Psychologist James Poulton writes about the viewer’s emotional responses to Stewart’s work (two of the most important having to do with beauty and melancholy) and addresses theories “pertaining to the influence of an artist’s psychology over the creation of a work of art” as applied to him. This is interesting stuff.

Vern Swanson,|6| who just retired as director of the Springville Museum of Art, in his own inimitable and erudite fashion, tells us that Stewart was Utah’s “greatest land/townscape painter” by virtue of “quality, significance and enduring popularity.” In an astute essay, he places the significance of the artist’s work in perspective and ends by stating that Stewart’s painting began a gradual decline in the 1950s, “a steady diminution of his powers” that lasted through the end of his life.

It took a village to make this book. The panoply of Utah’s art community in the acknowledgments should be noted before turning a single page. We are indebted.

It’s a mesmerizing volume, a real page-turner, perfect with a glass of Cabernet or a cup of cocoa at hand and an afternoon to while away.